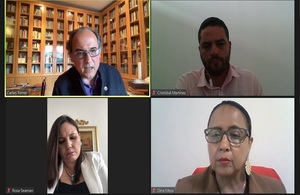 The British Embassy together with PEN International organised a webinar around Media Freedom in Honduras.

London: The event included the participation of government officials from the Ministry of Human Rights and the Human Rights Protection Mechanism.

Ambassador Nick Whittingham said that the United Kingdom had a strong track record of advocating for and protecting media freedom. In Honduras, he praises the role of the independent media in promoting transparency, good governance and inclusive dialogue.

The event began with opening remarks from Dina Meza, founder and current president of PEN Honduras; and recently awarded the Sir Henry Brooke Award for Human Rights Defenders. Meza expressed her concerns around threats against media freedom and called for concrete actions from the government.

The Vice Minister for Protection, Rosa Seaman, shared the perspective from the Ministry of Human Rights regarding the threats and opportunities around Media Freedom, focusing on the role of the government in providing a safe environment for journalists to work and inform.

The legal adviser of the Protection Mechanism, Cristóbal Martínez, spoke about the efforts made by this tool in providing attention to journalists around the country, focusing on the challenges and opportunities of working together with the Honduran Journalist Association.

Following the interventions from the government, Carles Turner, President of the Centenary of PEN International, led the discussion by sharing questions made by local and international NGOs which support and accompany journalists in Honduras. They discussed commitments, challenges and opportunities around Media Freedom in Honduras.

Finally, Jennifer Clement, President of PEN International, gave the closing remarks emphasising on the importance of ensuring a safe environment for journalists in Honduras and building trust between government and journalists around media freedom.

We support a free, independent, and diverse media that holds government and those in power into account. As a former journalist I’m convinced that the press provides a platform through which human rights can be promoted and upheld; and it enables engaged and empowered citizens to be in a position to make well-informed and balanced decisions about their own lives.