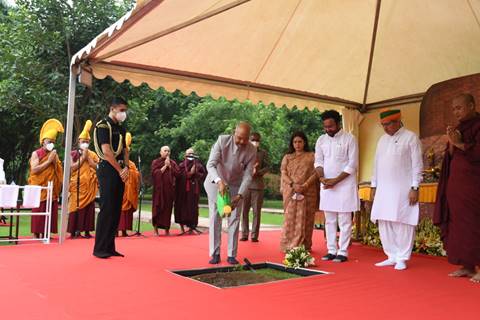 New Delhi:L G. Kishan Reddy, Union Minister of Culture said that  Buddha’s teachings reinforce the message of VasudhaivaKutumbakam – the world is one family – and Buddhism has a lot to offer not only to Buddhists but for everyone. In a video message on the eve of ‘Asadha Purnima – Dharma Chakra Day’, he informed that the day is also celebrated as Guru Poornima. “On this day we pay our respects and express gratitude to our gurus. Asadha Poornima is not just a sacred day for Buddhists all over the world but a significant day for humanity as well”, he said. On this day, more than two thousand five hundred years ago, Buddha, the teacher, delivered his first sermon at Sarnath to his five colleagues who later became his followers. Once he attained enlightenment, Buddha ensured that humanity too benefitted from it. Buddhism and Hinduism have a close relationship, he added.

“Guru Poornima is also associated with the birth of Veda Vyasa, the author of Mahabharata. Even today, Buddha’s eight-fold path continues to guide humanity. It provides a vision and guidance for world community to peacefully co-exist”, said Shri Kishan Reddy. The union minister extended his appreciation to The International Buddhist Confederation (IBC) for organizing this event. The organization has been instrumental in providing a common platform to Buddhists all over the world, he said.

In his message, Shri Kishan Reddy stated that the Ministries of Tourism and Culture and the Indian Council of Cultural Relations along with the IBC have planned an international conference in late November, this year, in India. “Scholars from all over the world would be invited for an enlightening discourse on Buddhism. This year as Bharat celebrates its 75th Year of Independence with ‘Azadi Ka Armit Mahotsav’, the contributions of Buddha are also being celebrated”, he said.

The union minister stated that India, as the home of Buddhism, will support the Buddhist community to share their heritage and wisdom. “The Prime Minister has made tremendous efforts to nurture and promote India’s Buddhist legacy. Many sites of ancient stupas are being re-developed so that pilgrims from around the world can visit them”, he said.

Connecting for Peace with Heartfulness on World Peace Day

Shri Kishan Reddy also joined the President of India Sh Ramnath Kovind in the customary ceremony of planting a Bodhi sapling from Bodh Gaya at Rashtrapati Bhawan today. Ministers of State for Culture Smt Meenakshi Lekhi and Shri Arjun Ram Meghwal were also present on the occasion. The ceremony was accomplished amidst the Buddhist chants of ‘Manglagatah’by monks of IBC, lead by its Secretary General, Ven. Dr Dhammapiya. Sh Kishan Reddy expressed his gratitude to the President of India for planting a Bodhi sapling from Bodh Gaya as a symbol of peace and harmony. “ I once again extend my wishes to Buddhists all over the world. I also express my gratitude to all gurus who through their wisdom have spread the values of peace and harmony”, he said.

During his visit, minister expressed his gratitude and recognized the tremendous efforts made by the large artist community in advancing the performing arts in the country. He stated that the communities’ undying passion was a significant contribution towards the preservation and propagation of India’s rich heritage and culture.

The minister also took the opportunity to present the efforts being made by the Government of India, under the leadership and guidance of Prime Minister Shri Narendra Modi, to celebrate India’s rich cultural heritage. Shri Kishan Reddy spoke about the various cultural events being organized under “Azadi ka Amrit Mahotsav” – a year-long celebration of India’s 75th year of independence.

Connecting for Peace with Heartfulness on World Peace Day

Industry-Academia-Government Collaboration is the Need of the Hour: Experts at PanIIT…