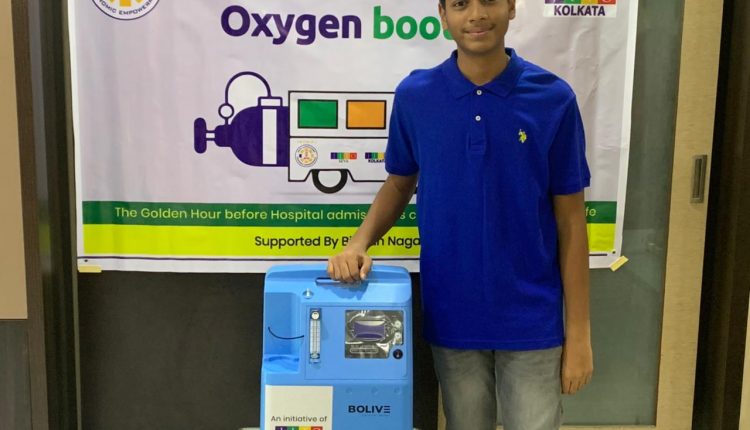 Kolkata: As the Covid 19 second wave hit India in March, 2021, while Government, private and social service organisations scrambled to provide healthcare services across the nation, they were supported by the unique efforts of thousands of individuals who stepped up to the challenge. Young Kolkata based budding cricketer, Sidhant Khemka is one such young individual who was moved by the ongoing effects of the pandemic and quietly took up the challenge to do his bit to save lives.

Sidhant, a student of Class 9 of Lakshmipat Singhania Academy, had seen the effects of Covid 19 up close and personal and knew what hundreds of families were going through. “A few months ago, members of my family were detected Covid positive including my grandfather, uncle, aunt, cousin brother and my mother. We come from a close knit joint family and all this was very disturbing for us. Especially, seeing my mother being taken to the hospital was a very difficult moment for me and my younger sister”, said the young boy. While eventually the family members recovered and returned home, it sowed the seeds of taking some action for other patients in his mind.

“When the effects of the second wave become overwhelming, all I could see on TV and around me were news of people who were struggling for oxygen across the city. We had so many known people who were desperate for oxygen cylinders and oxygen concentrators and many couldn’t simply afford it.”. As the numbers were shooting up and going through the roof, Sidhant also came across various social organisations who were donating money, equipment or food. “I read about NGOs, business houses, sportsmen, celebrities and community groups who were coming together to provide help. I was not sure how I could help but I really wanted to do my bit” the young sportsman added. The young lad, who learns cricket professionally, is a huge fan of Sachin and Virat and considers them role models.

“I then started reading about what oxygen concentrators are and how these were helping patients. I felt that while I could not go out and physically help people, I could atleast raise money to buy one and donate it to someone. Even if I could help one family or one person, it would mean a lot to me”, he mentioned. He then approached his parents, Vivek, a senior corporate executive and Ritu, a homemaker, with the idea. They encouraged him to reach out to close family and friends first. “We were touched when he came to us and we only advised him not to ask for an exorbitant amount from any individual since everyone was going through their own crisis”, his mother added. “I reached out to friends and their parents and even my teachers. Everyone was very helpful and wanted to contribute”. Sidhant, eventually, raised close to 65,000 Rs from more than 25 people over the course of a few days. He then approached a pan India social service organisation and offered to donate the amount if they were willing to buy an oxygen concentrator machine. The organisation run by the Jain community was pleasantly surprised to see what the 14 year old Kolkata resident had single handedly achieved. The amount was used to procure a 5 LPM concentrator and was put into use by the organisation immediately.

“I know that there are thousands of people working towards saving the lives of patients across India. I just knew that I also had to help since every bit contributes”, said the young student.