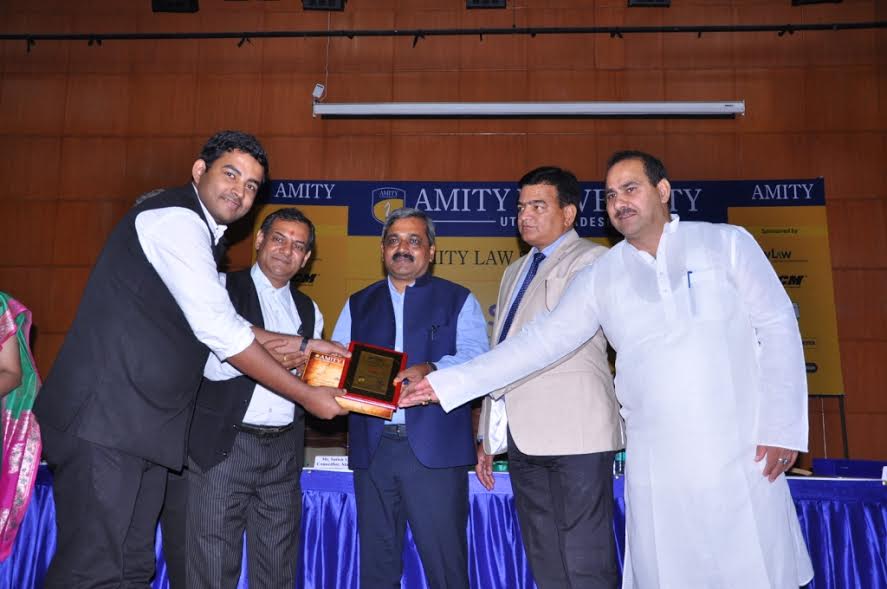 Speaking on the occasion, Dr. Shefali Raizada- Addl Director, Amity Law School Noida said that various National and International issues are discussed in law making bodies in order to frame laws with regards to the same. She stated that a Law is passed after many deliberations and discussions in Lok Sabha and Rajya Sabha, therefore, law students, who are the future of nation, need to be familiarized with current socio-political issues and the role of governing bodies. She highlighted that Srijan aims to give budding lawyers an experience of the working of Rajya Sabha and Lok Sabha which will help them in their careers ahead.

Congratulating the students, Mr. Satish Updhayay- Councilor, Malviya Nagar said that the name of the event is aptly names as ‘Srijan’ which means creation. He encouraged the students to dream big and make a fine print for creating new things. He pointed out that events like Youth parliament are very important since management of youth parliament cannot be taught through books and participation in such events teach students the value of democracy. Mr. Upadhyay persuaded the students to participate in every event and activity organized by the college as it will help them to be successful later in their respective professional lives. He urged budding lawyers not to manipulate law for harming others and advised them not to take up cases of traitors for money. Motivating the young students, he averred “whatever you will dream about your country, you will make it so in future.”

Sharing his views, Dr. Ashok K Chauhan, Founder President- Amity Group said that the legal profession is best profession and lawyers could be as successful as they want. He remarked that Indian Lawyers are the best in the world and advised students to believe in themselves and fight for the righteousness.

Addressing the gathering, Mr. Sanjay Saraf- Spokesperson, BJP stressed that presently, youth of the country have no rights and pointed out the need for Youth Commission in the country. Apprising about distressing situation of youth unemployment in every state, Mr. Saraf opined that there is a need for proper reservation system for youth just like SC/ST and Women. He laid stress on formation of a National Youth Commission in the country which could focus on youth affairs and could coordinate and implement policies to help the youth. Talking about the diversity and unity in the Nation, he averred that there are numerous issues in the country, in every state or city, there are different languages but despite all this, the people in India stay together and humanity binds them all. He shared that humanity is the biggest religion and if God does not differentiate between human beings and religions then human beings should also not endeavor to do so. He emphasized that we should be fundamentalist for our religion but not for other’s religion. Mr. Saraf called upon the students to be a human and have faith in humanity.

Lauding the efforts of Amity, Mr. Murari Tiwari, Advocate said that events like Srijan are need of the hour; law teaching institutions must familiarize the students with the Indian Parliament System, its structure and working as they are the future leaders of the country. He apprised that Parliaments need to have minimum eligibility criteria for entering Politics and pointed out that any person interested in pursuing law has inherent leadership qualities to become a Parliamentarian. He applauded the brilliant work by the students during the event and addressed them as future leaders and parliamentarians in making. Welcoming the budding legal professionals to the profession of law, Mr. Tiwari encouraged them to develop interest in the making of laws as without it they cannot become good lawyers.

ARBL Wins the prestigious ‘Most Promising Company of the year’ award