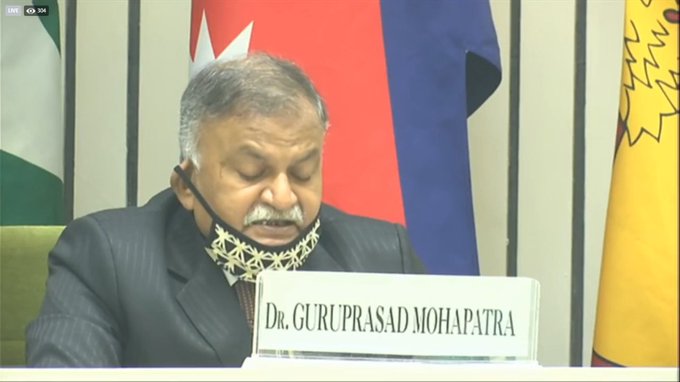 New Delhi: Department for Promotion of Industry and Internal Trade(DPIIT) Secretary, Ministry of Commerce and Industry, Dr. Guruprasad Mohapatra today said that the Budget 2021-22 has proposed various measures to reduce regulatory compliance burden which will improve ease of doing business for industry and ease of living for citizens.

While addressing the media here,Dr. Guruprasad Mohapatra said that the Government of India has undertaken an all-encompassing systematic approach to carry out sustained efforts to reduce and simplify the regulatory compliances for businesses and citizens. Hon. Prime Minister has directed that this exercise may be completed by 15th August 2021 to coincide with the 75th year of independence of India.

He said that a systematic exercise across Central Ministries/Departments and States/UTs is being undertaken to bring in Simplification, Rationalization, Digitization and Decriminalization in the current regulatory regime.

NCLT framework to be strengthened, e-Courts system shall be implemented and alternate methods of debt resolution and special framework for MSMEs shall be introduced.
Faceless Dispute Resolution

For reducing litigation and to give an impetus to the dispute resolution for small taxpayers, a Dispute Resolution Committee is proposed to be constituted.The procedure of the Committee will be conducted in a faceless manner.
In order to provide transparent tax appellate mechanism, it is proposed to the make the Income Tax Appellate Tribunal faceless and jurisdiction-less. A National Faceless Income Tax Appellate Tribunal Centre shall be established, wherein all communicationbetween Tribunal and appellant shall be made electronically.
Simplification

Several reform measures have been initiated and implemented to make customs clearance process faster, flexible and free from human intervention. This ledto reductionin overall time and cost of exports and imports clearances. Budget 2021 has announced measures to bring easeof compliance for exporters and importers.

It is proposed to mandate filing of bills of entry before the end of day preceding the day of arrival of goods by amendments in the Customs Act, 1962 (Section 46)
New section 28BB in Customs Act 1962 is proposed to prescribe a definite time-period of two years subject to certain exceptions, for completion of investigations.
Digitization

To encourage paperless processing, it is proposed to recognize the use of common portal to serve notice, order etc and the portal to act as a one-point digital interface for the trade to interact with the Customs.
Easier Tax Compliance

Budget 2021 announced various measures in keeping with its commitment to ease theburdenon taxpayers by bringing ease of filing of tax returns. Large number of senior citizens across India will be benefited with the simplification introduced in filing income tax returns.

Details of capital gains from listed securities, dividend income, and interest from banks, post office, etc. will be pre-filled in income tax returns.
To incentivise digital transactions and to reduce the compliance burden, it is proposed to increase the limit for tax audit for persons who are undertaking 95% of their transactions digitally from INR5 crore to INR10 crore.
Simplification

For Senior citizens who are of 75 years of age or above and who only have pension and interest income, it is proposed to exempt them from the requirement of filing of income tax if the full amount of tax payable gets deducted by the paying bank.
Removal of mandatory requirement of getting annual accounts audited and reconciliation statement, filing of the annual return on self-certification basis and charging interest on net cash liability with effect from the 1st July, 2017.
Rationalized Securities Transactions

The provisions of SEBI Act, 1992, Depositories Act, 1996, Securities Contracts (Regulation) Act, 1956 and Government Securities Act, 2007 are proposed to be consolidated into a single Securities Markets Code.
Simplified Compliance for Companies

Budget 2021 focused ondecriminalization and simplification measures to make it easier for starting and operating a business in India.

Decriminalization of the Limited Liability Partnership (LLP) Act, 2008 is being undertaken.
Simplification

The compliance requirements for more than two lakh companies would be eased with proposed revision in definition for Small Companies –increase in thresholds for Paid up capital from INR50 lakh to INR2 Cr and turnover from INR2 Cr to INR20 Cr.
Use of New-Age Technologies

During the coming fiscal 2021-22, data analytics, artificial intelligence, machine learning driven MCA21 Version 3.0 will be launched. This Version 3.0 will have additional modules for e-scrutiny, e-Adjudication, e-Consultation and Compliance Management.
Liberalized regulatory regime will not only boost productivity, employment and economic growth but would also further the vision of AtmaNirbhar Bharat, making India the globally preferred investment destination.

iednewsdesk May 19, 2022
An unusual project was launched by Master's students of the Institute of New Materials and Technologies of Ural…

Ural Federal University: Paleontologists Found the Jaws of an…

KISS to Become Knowledge, Logistical Hub of FIFA’s ‘Football For…