Medical researchers have estimated some of the impacts of this summer’s bushfire smoke and air pollution on Australians’ health. 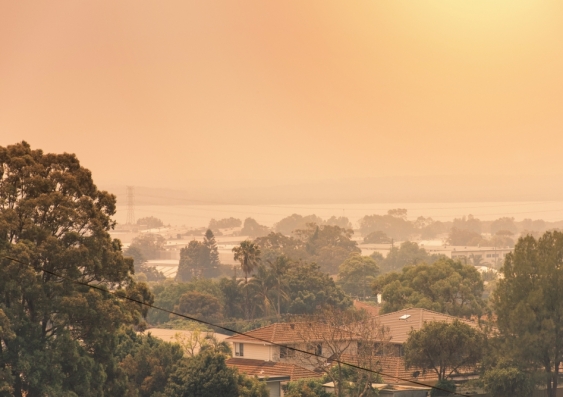 Smoke is just one of many problems that will intensify with the increasing frequency and severity of major bushfires, the authors say. Photo: Shutterstock

Bushfire smoke over eastern Australia during the 2019-20 summer is estimated to have been responsible for 417 excess deaths, 1124 hospitalisations for cardiovascular problems and 2027 for respiratory problems, as well as 1305 presentations to emergency departments with asthma, a preliminary evaluation published today in the Medical Journal of Australia shows.

Excess deaths describe a temporary increase in mortality in a population, usually caused by environmental phenomena such as extreme weather events, or pandemics.

The researchers, led by the University of Tasmania and involving a UNSW researcher, estimated population exposure to particulate matter less than 2.5 μm in diameter (PM2.5) for the regions of NSW, Queensland, the ACT and Victoria for which publicly available air quality monitoring data were available.

“We analysed data from the last quarter of 2019 and the first quarter of 2020,” says a co-author of the paper, Conjoint Professor Bin Jalaludin from UNSW Medicine.

“This was the case with at least one monitoring station in the study area on 125 of 133 days.”

The researchers then compared deaths, cardiovascular and respiratory-related hospitalisations and ER presentations with asthma to what they’d expect on any other day, according to historical data. That allowed them to extrapolate estimates for how many outcomes were likely caused by air pollution.

“From other studies we know what the risks are for deaths and hospitalisation from smoke and air pollution. We applied these risks to the baseline death rate or hospitalisation rate and calculated the deaths/hospitalisations attributable to smoke pollution in our timeframe,” Professor Jalaludin says.

The researchers’ estimates are based on air quality data from monitoring stations in the four eastern states – that is, they did not include data for smoke from all extreme fires in Australia during the study period.

“We only looked at four states for a defined period from the first of October 2019. There were some fires in September which we did not take into account and also those in other states,” Professor Jalaludin says.

“Secondly, we only looked at the outcomes where we have strong evidence. There are many other health effects caused by bushfires, for example mental health effects, hospital admissions or ED visits for other conditions which we did not evaluate – either because it is difficult to obtain such information, or because the links between air pollution and these conditions are not as strong.

“Given these limitations, our estimates are likely conservative, and we need more research to get a clearer picture of the overall impact.”

Professor Jalaludin says the team also did not specifically look at the effects of fires and smoke on those people in the frontline – firefighters, people and communities directly affected.

“There were a number of deaths in that group and I am sure there would have been cases of burns, smoke inhalation, injuries and similar.”

What is certain, Professor Jalaludin says, is that the findings indicate the smoke-related health impact of last summer was substantial.

“Smoke is just one of many problems that will intensify with the increasing frequency and severity of major bushfires. We urgently need to expand and diversify approaches to bushfire mitigation and adaptation to living in an increasingly hot and fire-prone country.”