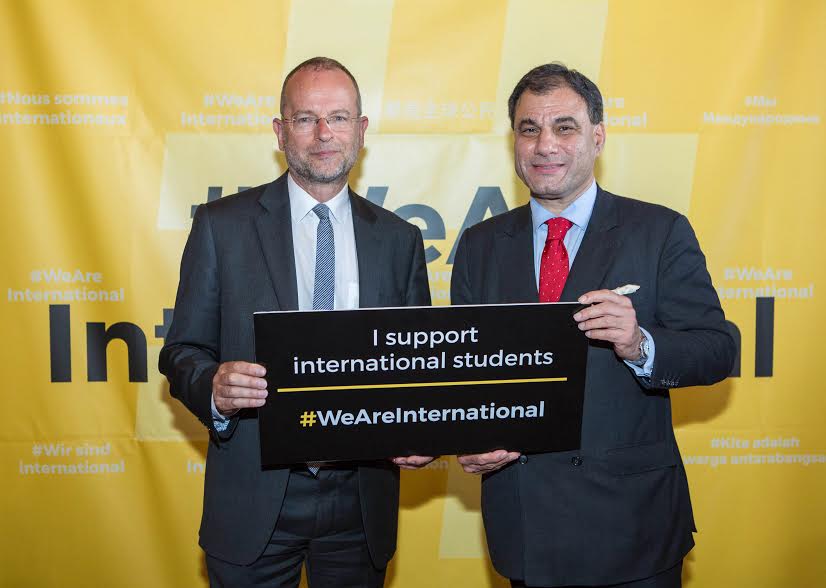 Businesses, students and universities unite in Parliament to champion the contribution of international students

New Delhi: Representatives from businesses, higher education and student organisations joined forces this week to highlight the economic, social and educational contributions that international students make to the UK.

The #WeAreInternational event, hosted at the House of Commons by Co-chairs of the All Party Parliamentary Group on International Students, Paul Blomfield MP and Lord Bilimoria, aimed to explain to MPs and peers why it is in the UK’s national interest to create policies that welcome more international students to study and work here.

Professor Rebecca Hughes, Director of Education at the British Council, and Neil Carberry, Director of People and Skills at the CBI, told the event how:

£25.8 billion is generated for the UK through on and off-campus spending by international students and their visitors (Universities UK, 2017)

Two thirds (64 per cent) of British adults think international students have a positive impact on the local economics of the towns and cities in which they study (ComRes, April 2017).

Almost one in seven countries around the world has a prime minister or head of state who studied in a UK higher education institution (British Council, 2014)

Guests also heard the moving stories of international student Mihaela Gruia, from Romania, who studied at the University of Sheffield and has now set up a successful business contributing to the city and UK economy, and #WeAreInternational co-founder Abdi-Aziz Suleiman, who was a child refugee from Somalia. Both spoke of the transformational impact of a welcoming UK and their commitment to giving back above and beyond the opportunity they had received.

Moving beyond the purely economic case, Professor Sir Keith Burnett, President and Vice-Chancellor of the University of Sheffield and co-founder of #WeAreInternational campaign, said: “We need to see international students for what they are – a precious part of our universities and society. They are people who contribute knowledge and skills. They train in our hospitals and give generously to charities in cities across the UK. They are vital to our businesses and economy. Our students, our colleagues and our friends.”

Another speaker was Lord Karan Bilimoria of Chelsea, Co-Chair of the All Party Parliamentary Group on International Students and the founder of the highly successful Cobra Beer. He described being the third generation of his family to study in the UK following in the footsteps of his grandfather who was one of the first Indians to study at Sandhurst, but he noted with deep regret the severe decline in talented Indian students coming to the UK, concerned by a lack of welcome and post study work opportunities.

He said: “The UK needs to remain open to the world to retain its place in the top six largest economies in the world and maintain its status as a global power. Not only is freedom of movement between the UK and its trading partners vital to ensure the right trade deals for UK businesses, but our universities are an asset to the country precisely because they bring people from around the world to become friends, family and lifelong ambassadors for the UK.”

Guests from across the UK heard from leading business organisations about the benefits international students bring to the UK’s economy and knowledge base – and why it is vital their numbers are not limited.

The event was hosted by the #WeAreInternational campaign, which is supported by hundreds of universities, businesses and organisations globally.

Are our brains GST-ready yet?

The University of Sheffield, UK is pleased to offer Science International Scholarships