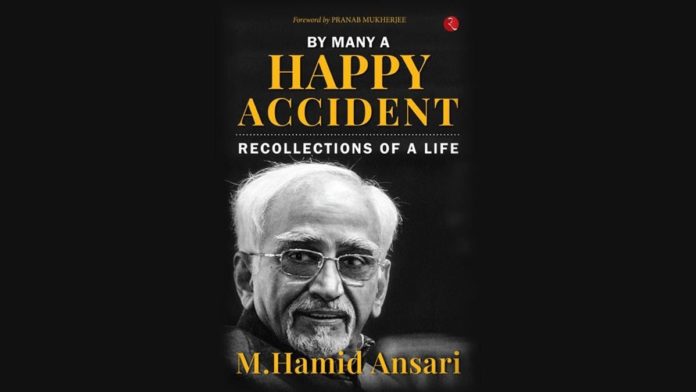 Fortuitous or not, By Many a Happy Accident is an account of a life of unplanned happenings that took M. Hamid Ansari away from his preferred fancy for academia to professional diplomacy and then be co-opted in public life and catapulted to the second highest office in the land for two consecutive terms. None of his predecessors, except Dr Sarvepalli Radhakrishnan, had experienced this honour.

Besides chairing the Rajya Sabha, Ansari used the vice presidency as a formidable pulpit to express himself candidly on a range of issues at different times in India’s changing political landscape.

Their overarching theme was the need for modern India to re-commit itself to the constitutional principles of justice, liberty, equality and fraternity, to the values of a composite culture, and for correctives in polity relating to identity, security and empowerment of the weaker segments of our society – but the Prime Minister (he doesn’t name) made scant reference to this on his last day in office and “pigeonholed” his work in Muslim countries, Ansari writes in his memoirs titled ‘By Many A Happy Accident – Recollections Of A Life’.  He shared an uneasy relationship with the Narendra Modi Government and the PM.

Hamid Ansari, after a long and distinguished career during which he served as India’s envoy to five countries and as the Permanent Representative at the UN, served two terms as Vice President, a honour previously accorded only to Dr Sarvepalli Radhakrishnan.

As he walked out of Parliament on his last day in office, he also “wondered if this temple of noise and reconciliation would remain so amid suggestions of physical and spiritual ‘renovation’,” Ansari writes in the book.

August 10, 2017 was the last day of his term in office and his last day as Chairman, Rajya Sabha. The day’s proceedings record the details of the morning session. The interventions from party leaders, front and backbenchers, and nominated personalities were full of compliments and complimentary references. Procedural correctives, the ‘no legislation in the din’ rule and dignified impartiality were specifically mentioned. One senior member on the back benches blessed him with a Sanskrit verse and wished him a long life in Upanishadic terms! Hamid Ansari deeply touches the soul of the readers.

The PM participated in this, and while fulsome in his compliments was somewhat selective in his reference to Hamid Ansari’s work. Hardly any mention was made of his period as Chairman, Rajya Sabha and while his professional career as a diplomat was alluded to and lauded, it was sought to be pigeonholed in the ‘atmosphere, thought process, debates amidst such people’ (meaning Muslim countries) where he was assigned, supplemented by work in Muslim surroundings as V-C of AMU and as Chairman of NMC.  In former Vice President Hamid Ansari’s book ‘By Many a Happy Accident’, he has made many revelations about the Modi government.

The tilt in overlooking his work elsewhere as a representative of India and particularly in the UN in a critical period was fairly evident and so was the reference to ‘your ideology’ and can hardly be attributed to poor staff work, nor can the fact be evaded that a Representative of India, anywhere and at any level including the highest, works on the articulation of Indian views and promotion of Indian national interests uninfl­uenced by personal preferences or prejudices of host countries.

‘There may have been some struggle within (all these years) but from now onwards you won’t have to face this dilemma. You will have a feeling of freedom and you will get an opportunity to work, think and talk according to your ideology’.” He writes in the book.

The intended message of the seemingly laudatory remarks was picked up by party functionaries and sections of the media, as also by the ‘faithful’ in the social media, and by the listening public at large. The reaction so generated has been sustained in various manifestations.  On the other hand, editorial comments (the next day) and a good many other writings considered the PM’s remarks to be a departure from the accepted practice on such occasions.

Its rationale is perhaps summed up in the Urdu couplet: ‘Bhari bazm main raaz ki baat keh di/Bara be-adab hoon saza chahta hoon’ (I have divulged in public what was hidden I am very insolent, chastisement I desire),” Ansari writes.

“What was ironic was that his response that morning had begun with an Urdu couplet: ‘Mujh pe ilzaam itne lagaaye gaye/Begunahi ke andaaz jaate rahe (So much have I been accused of, at proving my innocence has deserted me).”

He writes in the book in a very emotional way about his last day in office. When he walked out for the last time through Gate 9 of that iconic building escorted by the deputy chairman and many senior members of the House and my own team of officials, how he wondered if this temple of noise and reconciliation would remain so amidst suggestions of physical and spiritual ‘reconciliation’.

Later that day, there was a farewell function where a Scroll of Honour was presented to him. It was attended by the Vice President-designate (M. Venkaiah Naidu), the PM, the Speaker (Lok Sabha), the minister for parliamentary affairs, leaders of the House and the opposition and the Deputy Chairman (Rajya Sabha). The PM spoke there too. He referred to Hamid Ansari’s family background and experience in public life, mentioned Brigadier Mohammad Usman and his martyrdom in the 1948 conflict and said nothing adverse had come to his notice during his long spell in office. He hoped that the insights gained during the tenure would be recorded for public benefit.  He also highlights some of the important contemporary issues demanding urgent address to ensure good governance and inclusive growth and progress in our society.

This speech, different in content and tone, was not picked up by the media. The photograph of the function, with the Lok Sabha Speaker in the background, was! Ex diplomat and  former Vice President Hamid Ansari writes.

It dwells on the practical impediments that need to be overcome and examines in some depth the question of what it is to be an Indian.

Book : BY MANY A HAPPY ACCIDENT: Recollections of a Life by Mohammad Hamid Ansari

(Ashutosh Kumar Thakur is Bangalore based Management Consultant, Literary Critic and Advisor with Kalinga Literary Festival. He can be reached out at ashutoshbthakur@gmail.com)