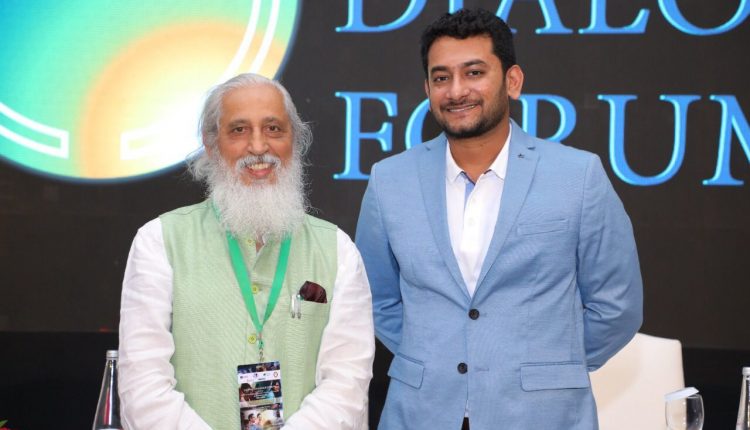 BYJU’S participated in Global Dialogue Forum on ‘Embracing Education’s AI-Driven Revolution’. Co-founder and Director of BYJU’S, Divya Gokulnath delivered a speech on the importance of soft skills during the conference. The event saw delegates from all around the world discuss the current technology advancements, especially AI in respect to education and the consequences of the same.
The conference hosted dignitaries like Mr S. Ramadorai, Chair, Club of Rome – India, Adviser to the Prime Minister in the National Council on Skill Development; Mr Dharmendra Pradhan, Hon’ble Education Minister of India; Professor Krishnaswamy Kasturirangan, Head, drafting committee, National Education Policy; Mr N.R. Narayana Murthy, Co-founder and former Chair, Indian tech giant, Infosys to name a few.
During the conference, Fillon-Ashida Pierrick, a European Commission official, emphasized AI as a versatile tool and the necessity to understand its limitations. He also stated that in order to predict the future of Artificial Intelligence, one needs to look at its history.
Meanwhile, AICTE President Sahasrabuddhe stated that there is great interest in establishing semiconductor firms in India. Despite these businesses being majorly found in Taiwan, and South Korea, the technology is from the United States. The organisation is compiling a database of all the languages spoken there to teach students so that students can study as well as complete their internships in these countries.
Divya Gokulnath, Co-founder of BYJU’S, while delivering a talk at the conference, said, “Tech enabled learning combined with a hybrid model of education is the way forward. Every single student has a different way of thinking. Every child has an innate potential and innate talent. We can shape this talent by personalizing education aided by technology. Some skills are better learnt offline and some skills are better learnt online. Hybrid learning enables you to have the best of both worlds. The future is not going to be degree based but rather skill based. That’s why it’s important to equip students with the right skills.”

Sarathkumar M.S., AVP, BYJU’S, shared his views at the conference on education by saying, “We knew that there needed to be changes in the education system. We knew that tech was the way ahead. What we needed to do was bring them both together. By harnessing the power of technology, we were also able to bring education to all parts of India—from rural communities where internet access is limited, to urban areas where affordability is an issue, and even remote areas where there are no schools or libraries available.”
BYJU’S is the largest global ed-tech firm that serves more than 150 million students across the world with highly adaptable, engaging, and effective learning solutions. BYJU was founded in India in 2011 with the goal of making high-quality education available to students all across the world. Along with our renowned flagship product, BYJU’S – The Learning App, the BYJU’S family of businesses includes Disney-BYJU’S Early Learn, BYJU’S Future School, Epic!, Osmo, Tynker, Toppr, and WhiteHat Jr. BYJU’S solutions help Pre-K through 12 education as well as a variety of competitive tests. The company focuses on a providing education to the underserved children around the country through ‘Education For All’ initiative. Partnering with more than 110 NGOs in 26 states have as of yet empowered 3.4 million children.

The Elimination of Malaria in India cannot happen till the private sector actively participates in the fight!

Centre of Excellence for Electric Vehicle Technology Inaugurated at FET, MRIIRS in…

University of Manchester: Three fifths of UK Medical Certificates of…

Department of Adult Continuing Education and Extension, University of…