CARE India calls for coordinated, bold action and a paradigm shift to broaden the discourse on reduction of gender based violence 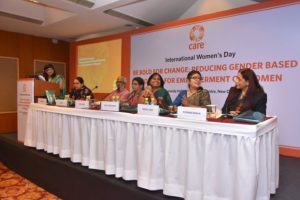 New Delhi: On the International Women’s Day 2017, CARE India organized a national consultation, ‘Be Bold for Change: Reducing Gender Based Violence for Empowerment of Women’ in New Delhi which witnessed the participation of many significant stakeholders.

The consultation called for coordinated, resolute action from public, private, and civil society stakeholders to address vital gaps in the implementation of the ‘Protection of Women against Domestic Violence Act (PWDV 2005),’ to reduce Gender Based Violence (GBV) across the country. In line with the United Nations 5th Sustainable Development Goal (SDG) of ‘prevention and elimination of domestic violence against women’, the consultation stressed on the need to develop a workable strategy and roadmap ahead, drawing from on-ground experiences, challenges and recommendations.

In his inaugural address, Mr Rajan Bahadur, MD and CEO, CARE India said, “Violence against women and girls is one of the most prevalent human rights violations in the world, cutting across social, economic and national dimensions. As per WHO 2013 figures, an estimated one in three women worldwide experience physical or sexual abuse in their lifetime. Gender Based Violence manifests in various forms – domestic, sexual, physical, verbal, emotional, psychological and economic violence. Through our work across 14 states in India, CARE India is simultaneously addressing the root causes, which are unequal power relations, social norms, early marriage, lower education status, attitudinal determinants and weak community sanctions which accept violence against women as a norm. We have adopted multiple ways of challenging and changing these factors at individual, family and community levels. The discussions in today’s consultations will pave the way to create an enabling environment, change social norms, strengthen institutional practices and heighten policy level advocacy to eliminate GBV”.

The four panel discussions at the consultation focused on the status of implementation of the PWDV law, challenges, gaps at the ground level, role of stakeholders and the need to move beyond the scope of law.

Ms Neelu, Secretary, Mahila Jagran Kendra shared, “The collaborative study between CARE India and Mahila Jagran Kendra, State-Facilitated Support Services Under PWDV Act, 2005 In Bihar” highlights the gap and quality of services being rendered by state facilitated support Institutions and stakeholders and the experience of the survivors in accessing justice under the law. The project was an enriching experience and completed amidst several challenges by our team. The findings revealed that over 82% domestic violence victims remain dissatisfied with redressal of services by helplines, police stations and NGOs. Only 67% of the Protection Officers and 42% police stations register complaints. This consultation today is a step forward to see a long-term plan by involving more partners to join this campaign to reduce GBV.”

Ms Malini Gupta, Vice President, RBS Foundation added, “Despite making progress at several levels, women are still considered unequal in many ways. They still face discrimination in terms of getting wages for the same level of work as men, only a meagre 20% of insurance policies are designed for women and they have less opportunities for saving money in the long run for their retirement. Even today, they have the primary responsibilities in child bearing and child rearing, and continue to face workplace discrimination even as maternity leave period has increased. This occasion today is a call for women to be bold, be independent, take their own decisions and focus on the goals they need to have to move forward.”

Ms Poonam Barua, Founder Chairman, WILL Forum India shared, “Indian women are 8% of the world’s population and no substantial growth is possible without their participation. It is therefore critical that the language with which people speak about and discuss women needs to change. People think there is no value, no productivity when it comes to women. The four key takeaways of today’s consultation are – changing the perception about women; the need to stop seeing women as objects of entertainment and as mere consumers; recognizing that women are also investors; transforming the comatose status of women by demanding policies which will enable them to be effective leaders and producers.”

Some of the key recommendations highlighted to strengthen the current PWDV Act were:

· Need for greater coordination between Central and State Government.
· Clearer data analysis and interpretation of the National Crime Records Bureau figures.
· Fixing definite role and responsibilities of the police, protection officers and other key service providers.
· Need for a strong monitoring framework which is key to track and manage the gaps in implementation of the Act
· Gender sensitization for key implementing and enforcement agencies
· Greater inclusion of community level organizations such as village Panchayats and community health centers.
· Emphasis on importance of training of lawyers, and other officials who deal with the survivors right from the reporting to counselling stages
· Improved mechanisms to reduce difficulties faced by domestic abuse survivors while filing FIRs/complaints, seeking dignified livelihoods, and approaching different state and local level agencies for relief and receiving legal entitlements
· Adequate budgetary allocations and reallocation of resources for swifter redressal

PwC  released a new report – Winning the fight for female talent: How to gain the diversity edge through inclusive recruitment

Deployment of one female scientist in every Krishi Vigyan Kendra made compulsory: Agriculture Minister

Stakeholders to remain aware of the new technologies