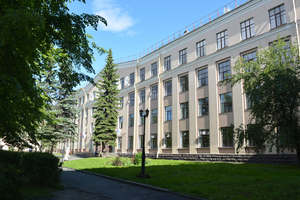 On the eve of the PetrSU Open Doors Day, teachers of the Department of Foreign Languages ​​in the Humanities O. M. Sherekhova, T. N. Tatarina and L. N. Yusupova organized the first meeting on the Zoom platform with students from schools No. 6 and No. 7 in the city of Apatity, Murmansk region.
The event was held with the support of the Department of Education of the Administration of the city of Apatity, Murmansk region, with the participation of Deputy Head Nikolai Nikolayevich Nifakin.

During the meeting, students received detailed information about the university, its institutes and educational programs implemented in them. PetrSU teachers presented the results of the admissions campaign in 2020, spoke about the most popular areas of training among applicants and the average passing score. Potential applicants learned what types of scholarships students of the university receive and for what special achievements one can become the owner of an increased academic scholarship. The teachers spoke in detail about the opportunities for students to participate in the project activities of the university, exchange programs, as well as in various clubs, associations and sections.

The greatest emphasis was placed on the advantages of studying at the Institute of Foreign Languages , which is one of the most popular not only among schoolchildren of Karelia, but also among graduates of neighboring regions and regions. The students were told about the areas for which the recruitment of applicants will be carried out in 2021, about the prospects for an interesting and eventful student life, and also showed videos prepared by students in the process of foreign language education. At the end of the meeting, the teachers invited the students of Apatity schools and their parents to the PetrSU Open Day, which will be held this year in a virtual space.

On December 12, potential applicants will be able to get acquainted with the programs of Petrozavodsk University in the virtual space