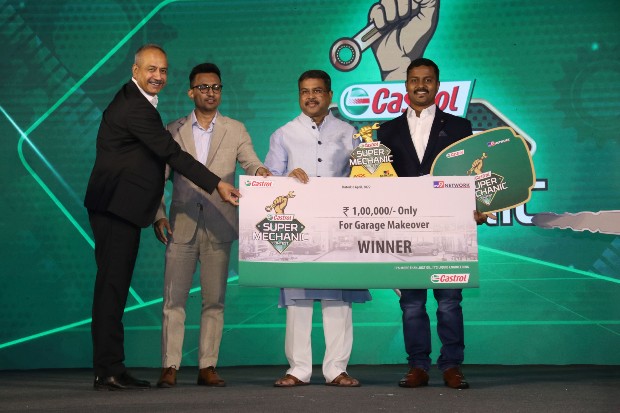 - Winners of the fourth edition were declared at a grand finale held in Delhi NCR - Record-breaking 140,000+ mechanics participated in this year’s edition of Castrol Super Mechanic conducted using physical and digital media - Over 24,000 mechanics from across the country were trained by Castrol India on various topics in masterclasses endorsed by the Automotive Skilling Development Council (ASDC) of India

The fourth edition of the Castrol Super Mechanic Contest was conducted using both physical and digital media to ensure maximum participation from mechanics across India. It registered record participation from more than 140,000 mechanics, through the contest’s Interactive Voice Response (IVR) round and a dedicated website. The contest included a range of new digital tools and features, including a mobile game to enable participating mechanics to master various assignments and challenges. Each contestant, in addition to testing dexterity in their field, also gained invaluable and relevant industry knowledge through the various stages. The top 50 participants competed in an on-ground finale spread over three days from 5th to 7th April 2022.

Extending its commitment towards upskilling and uplifting the mechanic community, Castrol India, in partnership with the Automotive Skills Development Council (ASDC) created a specially designed curriculum covering new-age vehicle diagnostics, digital tools for next-generation vehicles, and BS-VI technology, etc. The masterclasses were attended by over 24,000 mechanics spread across the country.

Speaking about the contest, Sandeep Sangwan, Managing Director, Castrol India Limited said, “At the heart of Castrol’s Super Mechanic Contest is our aim to create greater respect and pride that independent mechanics rightfully deserve in their profession. We have used this platform to inspire them to constantly upgrade their knowledge and skills in line with changing industry standards. With the fourth edition of the contest coming to a close, we are extremely delighted to see the enthusiastic response to the contest, as well as the excitement and encouragement it has provided to mechanics. Castrol extends the heartiest congratulations to this season’s winners and will continue to empower the mechanic community.”

Commenting on the occasion, Hon’ble Union Minister, Dharmendra Pradhan, Minister of Education, Skill Development and Entrepreneurship, said, “The mechanic community is a pivotal component of India’s automotive sector. Harnessing their talents and sharpening their skills in a systematic and organized manner can play a very important role in expanding their livelihood opportunities, allowing them to venture into changing times with confidence and competence. Programs like the Castrol Super Mechanic Contest go a long way in encouraging, upskilling and training mechanics, significantly expanding the scope for employment and entrepreneurship in the country.”

As a part of this season’s partnership with the TV9 network, Castrol Super Mechanic will be aired on the TV9 network and will be hosted by popular television actor Ravi Dubey.

Commenting on the occasion, Barun Das, CEO of TV9 Network, said, “Castrol India Super Mechanic Contest is a path breaking initiative. True to its reputation of being a global leader, Castrol has established new benchmarks. We are proud to be associated with this idea of empowering communities. For us, each of the 1.4 lakh participants is a winner. TV9 Network congratulates the winners of this season of Castrol Super Mechanic Contest”

Emerging triumphant with their skill, knowledge, and passion for automobiles, Kalka Prasad and Kishor Kallapa Gatade were crowned the champions of the Castrol Super Mechanic Contest 2021-22, in the car and bike categories respectively. Both winners were awarded a bike, insurance cover of two years for a family of four, and a cheque of Rs.100,000 or a garage makeover. The runners-up – Maru Mayur Bhai and Pravesh Kumar Rawat, in both the categories were awarded a bike and insurance cover of one year for a family of four.

Mechanic Kalka Prasad, the winner of Castrol Super Mechanic Contest 2021-22 in the car category, said: “I am thrilled and at a loss of words! What Castrol India has done and continues to do for our mechanic community is truly worth appreciating. This contest has helped us be recognized across the country and has brought new-found respect to our profession at large. The experience, exposure, and skills I have gained through training and skill development are invaluable. Castrol Super Mechanic will help create long-term sustainable development of mechanics across India and help achieve social upliftment. I am eager to make use of all that I have learned for my future and hope to share my knowledge and expertise with fellow mechanics.”

iednewsdesk May 16, 2022
Ural Federal University received 63 quotas for students and PhD students for the scholarship of the President of…