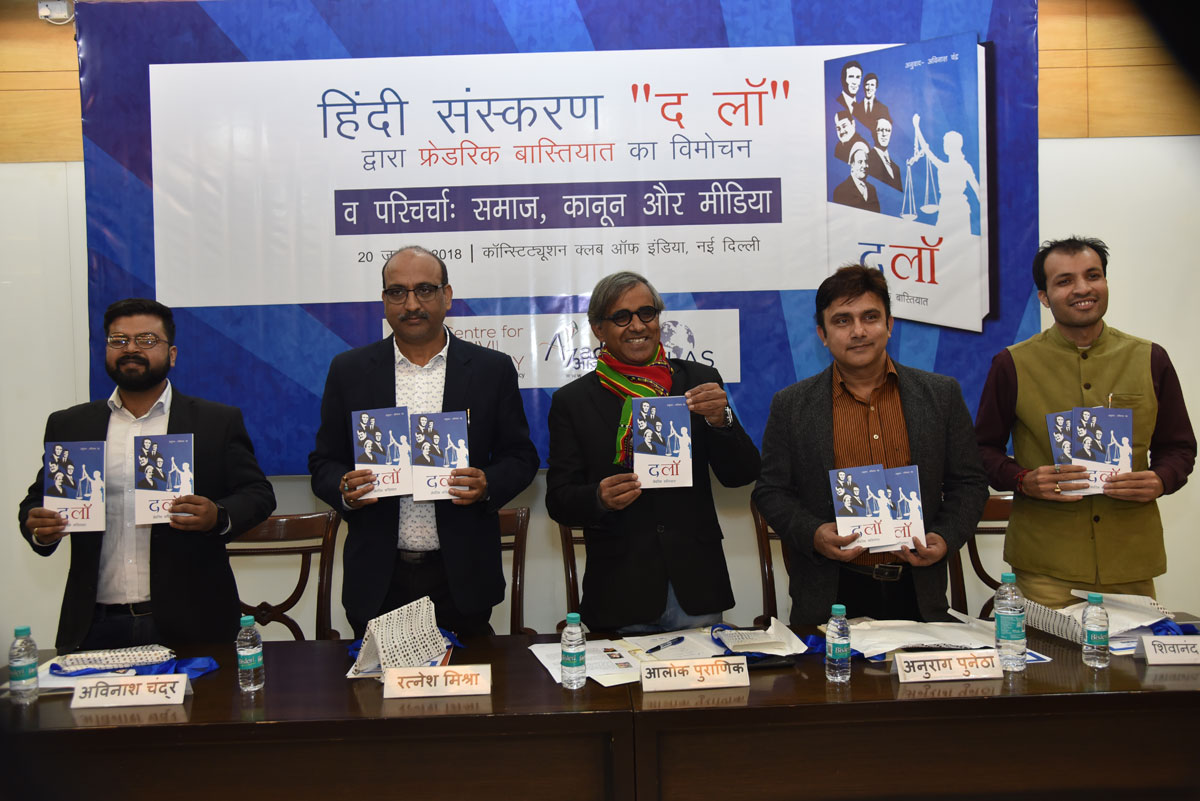 New Delhi: Centre for Civil Society (CCS), India’s leading Think Tank advocating social change through public policy in partnership with India’s first Hindi liberal web portal Azadi.me launched the Hindi translation of Frederich Bastiat’s book ‘The Law’.­ The book written by the acclaimed writer, economist and one of the most seminal thinkers of the classic liberal tradition,was first published in French in 1850,followed by iterations in English and Malayalam. Translated and edited by Avinash Chandra, Editor, Azadi.me, the translation and launch of the book aim to bring an accurate rendering of Mr Bastiat’s words and ideas into twenty first century, idiomatic Hindi for hindibhasis around the world.

University of Glasgow: ARCHAEOLOGY OFFERS A WAY TO MEASURE…

Alumni meets organized across the country under Deen Dayal…

Weighing in on the significance of a 168 year old book,Ratnesh Mishra opined that “any law made must take into account issues of individuality, liberty & protection of property rights. Further, more laws doesn’t necessarily translate to more justice. It is imperative that we remain mindful of this.”

Financial expert Dr. Alok Puranik said that the best indicator of a government’s efficacy is how the market responds to changes. He went on to stress that“language and medium restrictions has isolated a large chunk of the youth from accessing resources. This can only be mitigated if active measures are taken to break away from such constructs. Language should not be grounds for division.” PanellistAnurag Punetha praised the Direct Benefit Transfer (DBT) in government schemes. He claimed “through DBT, the cost of schemes will not only be minimized but the leakage of the public money can also be regulated.”

Shivanand Dwivedi criticized the socialist system and discussed how we must make laws that proactively catapult society forward rather than those that just passively watch over it.Avinash Chandra, Editor, Azadi.me, quoting Frederich Bastiat said that most laws are made to protect and benefit one particular section of the society at the cost of another. To mitigate the same the panel concluded that free market constructs are the best solution in the current economic environment.

University of Glasgow: ARCHAEOLOGY OFFERS A WAY TO MEASURE THE EXTENT HUMANS HAVE…

University of Copenhagen: Researchers examine which trees are movable when climate…

University of Glasgow: ARCHAEOLOGY OFFERS A WAY TO MEASURE THE EXTENT HUMANS HAVE…

iednewsdesk Apr 15, 2021
A worldwide team of academics are offering a new way to measure and quantify the extent humans have contributed…

University of Copenhagen: Researchers examine which trees are movable…