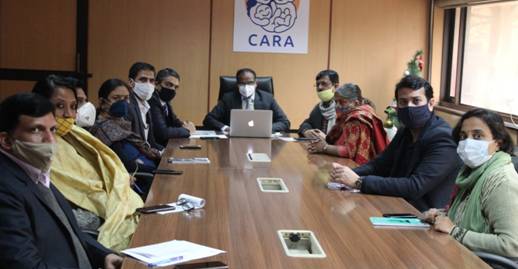 New Delhi: RamMohan Mishra,Secretary Ministry of Women and Child Development and Chairperson Steering Committee of Central Adoption Resource Authority (CARA) virtually addressed the Officers and Staff of CARA on its 6th Annual Day here today. CARA was granted the status of a Statutory body of Government of India w.e.f. January 15, 2016 vide Section 68 of the JJ Act, 2015 for facilitating adoption in the country. CARA celebrates its Annual Day every year on the 15th January. Due to the Global Pandemic COVID-19, the event was celebrated virtually.

Amidst such challenging times CARA has surpassed the figures of Adoption in last two quarters in comparison to the corresponding quarters of the last year. In the second and third quarter of 2019-20, the adoption figure was 849 and 885 respectively, while in 2020-21 it increased to 966 and 983in the second and third quarter. CARA has also conducted a series of virtual programmes on the diverse aspects of adoption, training more than 2500 social workers and stakeholders from all the States and UTs during the year.

The efforts put in by CARA during organization of various events like Web Lecture Series, Q&A Series on Counselling of Families by NIMHANS, Q&A Series on Facebook, Interactive Session with Prospective Adoptive Parents and Adoptees and Advocacy through IEC Material for promotion of adoption programme during International Adoption Month-November 2020, reached out to more than 1.5 lakh people. States and UTs have also conducted various programmes for promotion of Adoption with wide mass outreach.

University of Bristol: Foraging humans, mammals and birds who live in the same place behave similarly

University of Exeter: Guppies have varying levels of self-control