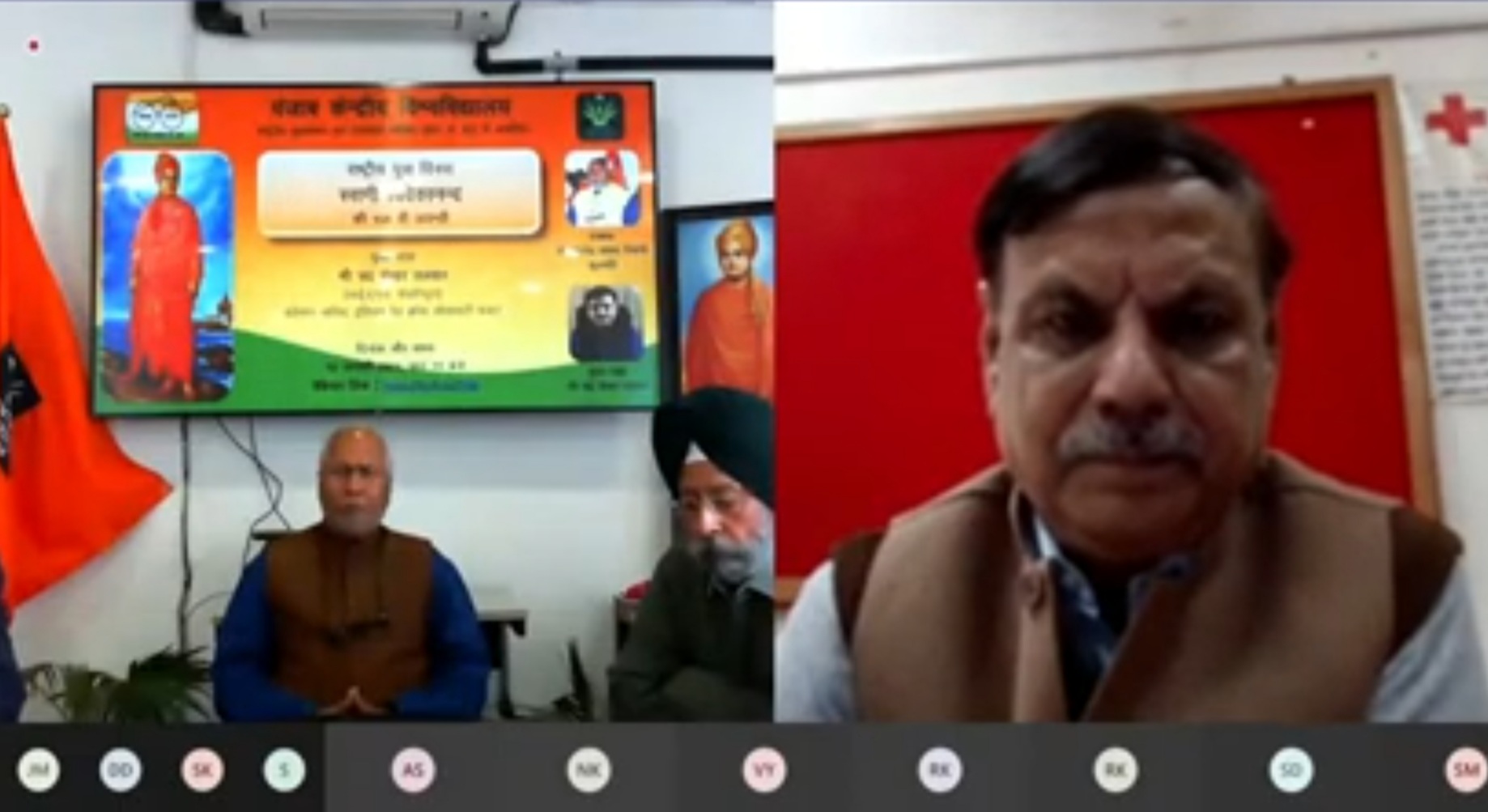 Bathinda: To commemorate 158th birth anniversary of Swami Vivekananda, Central University of Punjab, Bathinda (C.U.P.) a webinar on ‘Life & Teachings of Swami Vivekananda’, The program was conducted under the patronage of Vice Chancellor Prof. Raghavendra P. Tiwari on the occasion of National Youth Day. The keynote speaker of this program was Shri Chander Shekhar Talwar, Retd. I.A.S.

At the start of the programme, Dr. Vipan Pal Singh delivered the Welcome Address and put a light on the Programme Theme. He mentioned that National Youth Day is being observed every year on 12th January to remember the teachings of Swami Vivekananda. Subsequently, Dr. Rubal Kanozia introduced the keynote speaker to the participants.

Keynote Speaker Shri Chandra Shekhar Talwar mentioned that Swami Vivekananda was a great Indian Saint who represented the Indian Culture at the world level and who gave the message of spiritual unison and creation of new consciousness among the youth. He stated that the Swami Vivekananda’s speech at the World Interfaith Conference held at Chicago in 1893 on the religious acceptance & tolerance was so impactful that the great philosophers, scientists and thinkers applauded him for his knowledge and considered him as their inspiration. He added, that Swami Vivekananda was a scientific, rational and spiritual person by nature who awakened patriotism and enthusiasm among people through his spiritual discourse. He said that Swami Vivekananda showed youngsters the path of self-control, practice and concentration of mind for learning new things and developing their personality. Shri Talwar asserted that Great Indian Leaders such as Dr. B.R. Ambedkar, Pandit Jawahar Lal Nehru and others considered Swami Vivekananda as the real role-icon of youngsters who gave the message of strength, fearlessness, faith, self-confidence, compassion and tolerance to youngsters and encouraged them to contribute towards nation building.

Vice Chancellor Prof. Raghavendra P. Tiwari in his presidential address made an appeal to youngsters to follow the teachings of Swami Vivekananda. He emphasized that Swami Vivekananda considered holistic education as essential for building the character of youth, which is the main objective of NEP-2020 so as to build such intellectual global citizens who could contribute towards realising the mission of Self-reliant India.

Towards the end, Shri Kanwal Pal Singh Mundra delivered the formal vote of thanks. The Programme was attended by faculty, administrators, and students of the university.

Vice President of India speaks at the Institute of Hotel Management, Goa