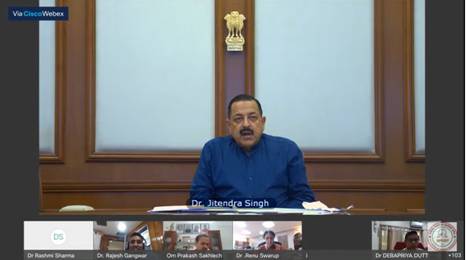 Dr Jitendra Singh while inaugurating a year-long ‘Vigyan Utsav’ organised with the participation of all the S&T councils to celebrate ‘Azadi Ka Amrit Mahotsav’ stated that “Science and Technology is key to achieve Prime Minister Modi’s Atmanirbhar Bharat, and State S & T Councils have a crucial role to play. He further added that Science and Technology is a basic prerequisite for self-reliant India, and the country is going to play a big role in scientific world through co-ordinated efforts of centre-state.

Referring to Prime Minister’s 75th Independence Day Speech emphasizing that the celebration of 75 years of Indian independence should not be limited to just one ceremony, Dr Singh said that the groundwork must be laid to move forward with new resolutions. “Starting from here, the entire journey of the next 25 years, when we celebrate the centenary of Indian independence, marks the Amrit period of creation of a new India, and the roadmap for the next 25 years will be determined by scientific and technological innovations in all walks of life,” he added.

Around 500 students congregate for largest Intercollegiate…

Vespa celebrates Mother’s Day with the stories of…

Mandira Bedi talks about the importance of mother’s health…

Shri Omprakash Sakhlecha, Minister, Govt. of Madhya Pradesh, Department of Science and Technology & Micro, Small and Medium Enterprises, stressed the need for mapping of all technologies of science and technology in the country to help states use S&T interventions for their progress in all sectors.

Dr Renu Swarup, Secretary, Department of Science & Technology and Department of Biotechnology, GoI, mentioned that Vigyan Utsav, through the identified themes to project the entire STI ecosystem of the States, would be able to establish a larger connect with stakeholders and would definitely lead to national development.

“There are encouraging results in many states through State S&T Councils, and this programme will further boost the S&T ecosystem in the country,” said Dr Debpriya Dutta, Scientist G and Advisor, Department of Science & Technology, GoI. This Vigyan Utsav, will be celebrated till August 2022 with the participation of all the states.