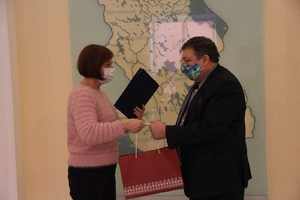 S.G. Verigin, Director of the Institute of History, Political and Social Sciences, was awarded the Certificate of Honor of the Ministry of National Policy of the Republic of Karelia.
A certificate of honor for the formation of a culture of peace and harmony in the Republic of Karelia, patriotic education of children and youth, Professor Sergei Gennadievich Verigin was presented by Deputy Minister for National Policy Alexandra Borisovna Ershova.

I have been cooperating with the ministry since the creation of this structure. On December 4, 1991, the Committee on Interethnic Relations under the Council of Ministers of the Republic of Kazakhstan was formed, which began its activity in March 1992. And already in March 1992, together with the Deputy Chairman of the Committee, Viktor Nikolayevich Birin, participated in the project “Karelians and Finns in Russia”. As a result of the project, a collection of articles was published in Moscow. In it, I published an article “Resettlement of Ingrian residents to Karelia at the end of the 1940s.” So my cooperation with Minnats goes back almost 30 years

A career can be made in the Arctic