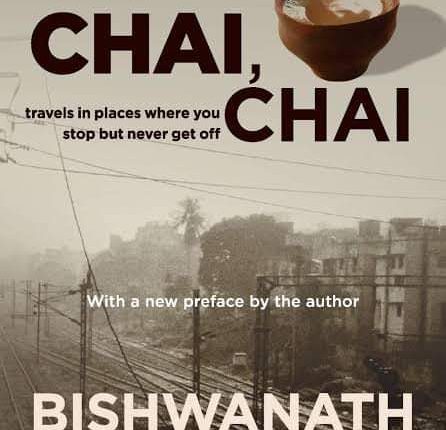 Chai, Chai: Travels in Places Where You Stop But Never Get Off

Biswanath Ghosh paints an amazing and mystical picture in this book, where he starts his journey from the Itarsi Station, Madhya Pradesh.

Chai, Chai: Travels in Places Where You Stop But Never Get Off allows the reader to join the author-narrator while he experiences new places and faces. The beautiful sun, the rich cultural history and the people are all rendered with humor and love. One can almost feel the narrator going through the little lanes in Kanpur and then end up in Madras.

Whether one is drinking tea at a local café or sitting with numerous people in a local train, Ghosh breathes life into every moment. While speculating on life’s little moments, the author also realizes the amount of hours spent in waiting at railway junctions. The destinations are not just stations and stops for trains to drop commuters off. They represent a different life and a new adventure everyday.

There are little towns that people have never heard of which Ghosh talks extensively about such as Shoranpur, Arakkonam, Itarsi, Jhansi and Mughal Sarai. What makes this work unique is that these places are described in terms of the people encountered. Trains play an important role in bringing people from all parts of the country and all walks of life together. This is where the true story lies.

Ghosh enriches this story with various descriptions and personal insights. The book is witty, humorous and helps rediscover those areas of India which most have forgotten about due to commercial tourism. No matter how obscure a town maybe, it still holds a rich cultural history which Ghosh describes with avid details.

One of the things I miss about my miserable days in Delhi was the train travel. Unless I’m pressed for time, I prefer to travel by train. I enjoyed my Journeys, because it gave time for myself and encounters with all sorts of characters. People who you wouldn’t have met in any normal circumstance, either because you belong to different social strata or demographic or both. If you are lucky enough, you end up forging friendships that would last.

Often I wondered about those small stations that are along the way. I wondered about how important the life of people in those villages are, about how this station that is so insignificant could be the soul of a town/village and their sole identity depends on this station. I always had this itch, to just get down and walk out of station, but I had somewhere to go. Always told myself that I’ll take a break someday and visit just these tiny towns, take a peek into the lives of people here.

Perhaps, that is the major reason why I liked this book so much. It is closer to my heart. Though it’s not how I’d thought I’d do any travel but it’s definitely how I’d want it to be.

Book “Chai Chai” takes you to places that you may have heard of or passed by but never have imagined spending a day or two in. But for Jhansi and Benares, I doubt I would ever want to visit any of the smaller towns this book takes you through. There are no great aha moments in this book, but plenty of laugh out loud situations that the author describes through his dry witty style. The thing about this book and the author’s style of writing is that at some point you feel “this can be me talking”. It is that lucid and easy to read.

This is a good little travel book, and I’m so glad. Indian bestsellers always tend to be underwhelming and unfelt, pandering to the lowest-common-denominator, but “Chai Chai” is honest, well-written, and satisfying.  These portraits of small towns shaped by (and left behind by) the Indian Railways, he manages to evoke a distinct nostalgia for the simpler India of just a few decades ago. This is Chai, Chai‘s success: it focuses on something all of India holds dear – the trains and the towns it passes through – and evokes in us something every Indian has felt, the sensation of looking out the window and wondering what these places were about.

The book presents a very interesting idea – what lies beyond the railway platforms in the cities or towns, those very recognizable junction names, where all long route trains invariably made long halts. Perhaps in the current Era of superfast trains they are becoming less relevant, but till about two decades ago, they were the part and parcel of any moderately long railway journey.  I was intrigued by the author’s idea of exploring some of these major junctions, where all trains crossing states and zones stopped, but were seldom the purpose of making the journey.

I don’t mind that his quest didn’t turn up much of interest in these small towns and in some cases little more than villages. It’s not to be expected that every place will have an interesting history of rich heritage. The sad and unfortunate decline of a couple of these towns struck a chord, as I saw similar things happen in the place I grew up in. In two of his destinations he was able to get more out of his visit by making detours to the world famous cities of Banaras and Khajuraho.

All those who have travelled by trains and know the stations they saw but never visited. They remain a mystery to us. The author is on the journey to unravel this mystery and for this he visits all the stations he never got to visit. I can relate to this, there have been stations I got down and felt curious about the towns. I cannot visit them but vicariously I visited all those big junctions mentioned in this book.

I was amazed by the way the author makes friends everywhere he goes. It might be one of the most essential qualities of the journalists. The book is rich with anecdotes, and history.
Definitely, one of the nice reads in Indian travelogue section.

Through Mughalsarai how well the writer has told about the spirit of a small city and a middle class person. Yes the book is monotonous in Itarsi and Jolarpettai, but Shoranur is beautifully depicted. And last but not least the hotels and drinking strength. An unusual premise for a travelogue which works great as the author’s travels through railway junctions in India that everyone’s heard of but never stepped their foot in.

It is a book which will want you to travel! Not to the swanky upscale destinations in South East Asia or Europe which is all the rage today – but rather to those small towns and tiny cities which dot our country from the North to the South and from East to West. It will want you to take a train – maybe with your family or maybe with your old college friends – may very well be with cousins with whom you hardly catch up once a month nowadays. And go to Itarsi! Or a Mughalsarai or maybe a Jhansi or Jolarpettai!

I fairly enjoyed the book. It also made me nostalgic about the simpler times of my childhood and college days spent in small towns of India.

‘How to Avoid a Climate Disaster’: Bill Gates in conversation with Alok Sharma at the Jaipur Literature Festival