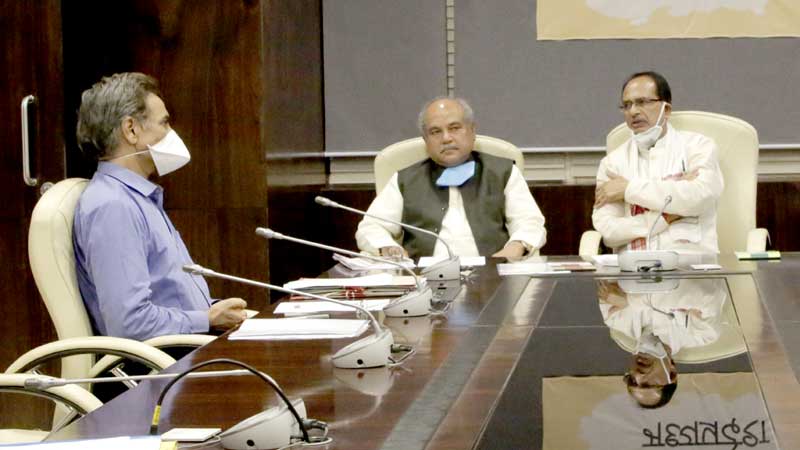 Chambal Express Way and other schemes will gain momentum

It was informed in the meeting that the approval of Chambal Express Way will give new dimensions to the development of Chambal region. Under the plan, land to be allocated to the Government of India has already been identified. In order to ensure the progress of total 309 kilometer area, various procedures related to the plan are being completed speedily. The Union Minister Shri Tomar informed that he will hold discussion with the Union Minister for Road Transport and Highways, Micro, Small and Medium Enterprises Shri Nitin Gadkari this week for speeding up the procedures.

In the meeting, discussions took place as regard to supply of adequate potable water in Gwalior city during summer from Chambal river, on arrangements for potable water under the Jal-Jeevan Mission, execution of AMRUT Yojana, development of medicinal park in state, Bihad Vikas Yojana, to benefit Food Production Organizations of Farmers under the Atmanirbhar Bharat, MNREGA, Pradhan Mantri Awas Yojana, modernization of agriculture and execution of schemes in the field of organic farming. It was informed in the meeting that labourers got a big support from MNREGA during the corona crisis. As compared to other states, needy persons got employment in large number in the state. The Prime Minister will review the situation of 24 districts of the state. Madhya Pradesh is a leading state in this work. Herbal Gardens are also being developed under the MNREGA activities.

The Chief Minister Shri Chouhan said that the Union Minister Shri Tomar has experienced the state of rural development and progress of Madhya Pradesh in agricultural sector besides better implementation of schemes. In the interest of farmers, he approved the procurement of Tiwda mix Gram, which resulted in procurement of over 1.5 lakh MT Tiwda mix Gram from the farmers of Madhya Pradesh. Gratitude was expressed to the Union Minister Shri Tomar for implementation of schemes related to soil testing and for extending the date to benefit the farmers under the Pradhan Mantri Crop Insurance Scheme. The Chief Secretary Shri Iqbal Singh Bains as well as Additional Chief Secretaries and Principal Secretaries of various departments were present at the meeting.