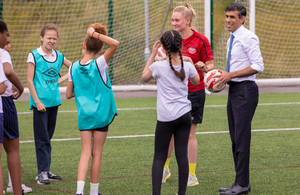 The Chancellor attended a grassroots football facility to see the Government’s multi-million-pound investment in sport in action.

It comes after the government committed £25 million of new funding to support the growth of grassroots football at the Budget earlier this year – enough money to build around 700 new pitches across the UK.

Chancellor of the Exchequer Rishi Sunak said:
Grassroots football and facilities like Gunnersbury Park play a vital role in local communities, supporting jobs and developing the stars of the future.

That’s why we invested £25 million of new money at the Budget earlier this year – building on the £600 million of targeted support we have provided for sport throughout the pandemic.

Government support like this will help the home nations find and train up the stars of the future and I urge everyone to get behind England and Wales as the remaining British teams in the knockout stages of Euro 2020.

Mark Bullingham, FA Chief Executive, said:
Grassroots football has the power to positively impact the lives of those that play, with the clubs sitting at the very heart of their communities.

The recent £25m investment into grassroots football from the Government, the first part of their £550m commitment, is welcomed and will transform football facilities across the country.

It was fantastic to welcome the Chancellor to a grassroots training session where he was able to see the top facilities, get involved, meet the players and experience the benefits first-hand.

At the visit earlier this week, the Chancellor met a disability community sports group before helping to set up a training session for an all-girls football group from local schools, along with their coach, as well as Brentford FC player Joshua Dasilva.

Last year, the government introduced the £300 million Sport Winter Survival Package to protect spectator sports in England and, at Budget this year, a further £300 million was announced for a Sport Recovery Package to continue to support clubs as fans return to venues.

Separately, Sport England, which is funded by the government and National Lottery, has provided £220 million to support community sport clubs and exercise centres through the coronavirus pandemic. The latest figures show that £10.5 million has already been awarded to over 1,500 football clubs.

Sport England has also provided an extra £50 million to help grassroots sports clubs and organisations as part of their Uniting the Movement strategy.

Football Foundation figures show that football participation increases by 10% at facilities like Gunnersbury Park which have been awarded a Hubs grants. In 2017, this meant 250,000 more people participated, a third of them women and girls.

Many football clubs at all levels of the UK domestic game have benefited from the multi-billion-pound package of government support, including the furlough scheme and Covid loan schemes.