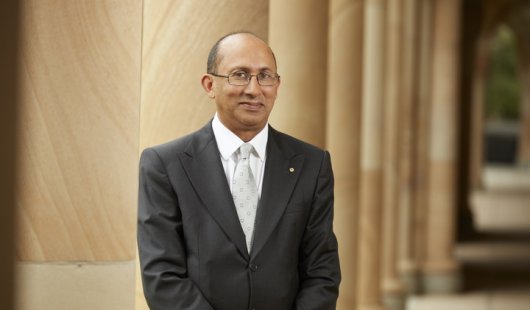 Chancellor re-appointed to lead University of Queensland into the future

The University of Queensland Chancellor, Peter Varghese AO, has been elected for a second term at a meeting of the UQ Senate.

“His experience during the past four years as UQ’s Chancellor, as well as his 38-year career in diplomacy and intelligence, means that Mr Varghese is very well placed to navigate the changing higher education sector landscape,” Professor Terry said.

“We have forged a close working relationship since I started in my role in August 2020 and I very much look forward to continuing to work together to further enhance UQ’s global reputation for learning, research and knowledge leadership.

“I am confident that Mr Varghese’s vital strategic guidance and advice will ensure the University’s continued success as we seek to play a key role in Australia’s path to COVID recovery.”

Mr Varghese said he was honoured to continue as Chancellor and the opportunity to further build on UQ’s achievements – these include the reputation of our graduates, the success of our recent philanthropic campaign, our impressive research profile and our unmatched track record in commercialisation.

“Universities play a vital role in the national conversation and there has never been a more important time to contribute to public discussion, including on the purpose of universities and the foundational values of freedom of speech and academic freedom.”

“The impact of the global pandemic, as well as the need to establish diverse but sustainable funding streams, pose a range of risks and opportunities for Australian universities,” Mr Varghese said.

“However, planning for and managing risk is part of any large organisation’s operations and we have already taken a number of steps to safeguard UQ’s future.

“I am particularly proud to have facilitated the creation of a University Future Fund. The investment will be used to support teaching and learning activities, unplanned capital expenditure and other programs in the years ahead.

“The University will continue its commitment to increasing non-government research funding from industry sources, as well as income from philanthropy, and I look forward to continuing to work closely with my fellow Senate members.”

After graduating from UQ with a Bachelor of Arts (First Class Honours) in 1978, Mr Varghese went on to serve as High Commissioner to India, High Commissioner to Malaysia, Director-General of the Office of National Assessments, and Senior Advisor (International) to the Prime Minister of Australia.

He retired as Secretary of the Department of Foreign Affairs and Trade in 2016.

Mr Varghese said UQ had moulded the intellectual foundation of his career in public service and public policy.

“I am honoured to have the chance to work with the Vice-Chancellor and University Senate in setting the strategic agenda in what can only be described as challenging times for the sector – to ensure UQ remains in the top global and national university ranks,” he said.

UQ’s budget exceeds $2 billion and the role of the Chancellor is akin to the chairman of a board. It carries strategic, governance and ceremonial responsibilities and requires extensive engagement within UQ and the broader community.

Innovation is key to being a successful ASX company

iednewsdesk Jan 17, 2022
A small protein that originates from the cells of the human body can play a big role in controlling diabetes. In…