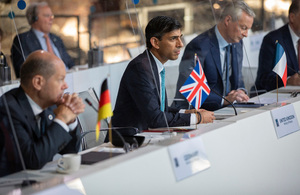 The foundations for the historic agreement on global tax reform were laid at the G7 in London, and now 132 countries and jurisdictions representing 95% of world GDP have signed up to the deal within the OECD.

Following two days of G20 meetings in Venice, including an informal breakfast meeting of the G7 chaired by Mr Sunak, Finance Ministers pledged their full support for the deal and called for outstanding issues to be swiftly addressed at OECD level along with a detailed implementation plan by October. The group also called on countries who have yet to sign up to do so.

The seismic global tax deal will change the international rules so that large multinationals pay their fair share of tax in the countries they do business and introduce a global minimum rate that ensures multinationals pay tax of at least 15% on profit in each country they operate.

Speaking in Venice, the Chancellor said:
I’m delighted that the full weight of the G20 is behind this historic tax deal – which will make sure our global tax system is fit for purpose in a digital age and crucially is fair.

We must continue to build on this momentum over the coming months and work together as an international community to create a fairer tax system, which cracks down on tax avoidance and levels up our high street.

The G20 also reiterated the need for urgent action to tackle climate change and biodiversity loss.

The group encouraged international financial institutions to step up their efforts to align their activities with the Paris Agreement and called on the private sector and markets to play their part to support the transition to net zero.

The G20 also committed to continue supporting the poorest and most vulnerable countries as they address the health and economic challenges associated with COVID. G20 Finance Ministers and Central Bank Governors supported a general allocation of IMF Special Drawing Rights (SDRs) totalling USD $650 billion and urged swift implementation by the end of August.

The group also called on the IMF to quickly present options for countries to voluntarily channel a share of their allocated SDRs to help vulnerable countries finance more resilient, inclusive and sustainable economic recoveries.

More than 80 million vaccines administered across the UK