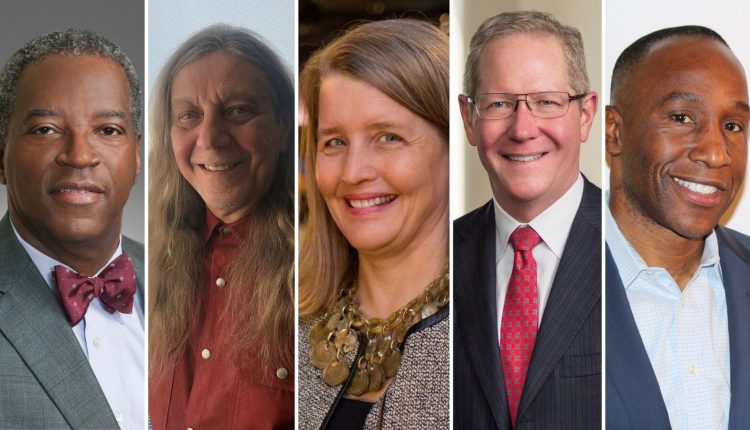 Since its inception, the Yale Medal, the highest honor presented by the Yale Alumni Association, has been presented to more than 300 individuals who have shown extraordinary devotion to Yale’s ideals and demonstrated their support through extensive, exemplary service to the university and its schools, institutes, and programs.

Like their predecessors, this year’s recipients have made significant and lasting contributions to Yale – as volunteers, fundraisers, trailblazers, and difference-makers, rallying the alumni community to support the university, supporting students to achieve their very best, and guiding a new generation of alumni leaders to continue Yale’s tradition of service.

Please read below for more on each of the recipients and their important contributions.

Dawson is a seminal figure in Yale’s history, a student activist who transitioned to alumni leader, working tirelessly to create a better, more inclusive university and blazing a trail for all who came after him. His work began early, when as a first-year student he teamed with upperclassmen to organize Yale’s groundbreaking symposium, “Black Studies in the University.” Subsequently, he played a pivotal role in the creation of Yale’s African American Studies Department and became a key member in – and the eventual moderator (president) of – the Black Student Alliance at Yale, working with BSAY’s leadership to push for the creation of the Afro American Cultural Center (“the House”) and lobbying the university to allow women as undergraduates. He also was instrumental in maintaining calm on campus during the 1970 May Day demonstrations. Dawson has extended his involvement as an alumnus, organizing mini reunions for Black alumni, staying active in Class of 1971 events, and participating on alumni panels to inform admitted students about the benefits of attending Yale. Notably, he raised money and awareness to spur the landmark renovation of the House in the early 2000s and has been a regular contributor at House events. A loyal friend and dedicated mentor, he has remained active in both the alumni and undergraduate communities, supporting students to make the most of their Yale experience and working to ensure that Yale is its very best as an institution.

Leatherbury’s dedication to and work on behalf of Yale is as renowned as it is varied, all executed with a sense of purpose and determination. He served with distinction with the Yale Alumni Fund, as both vice chair (2014-16) and chair (2016-18), setting the strategy for the Alumni Fund’s fundraising priorities and inspiring countless alumni to step up their efforts as fundraisers and donors. Since that time, he has assumed a leadership role with the Yale Law School Fund Board, providing critical direction for its annual giving strategy and chairing its Best Practices Committee, and has also served on the Law School’s Executive Committee. In addition, he has been active both locally, as a vice president of the Yale Club of Dallas and as chair of the Alumni Schools Committee, and with his undergraduate and professional school classes, serving multiple stints as co-chair of the Reunion Gift Committees for the Yale College Class of 1976 and for the Yale Law School Class of 1979. In addition to his leadership of alumni programs, Leatherbury has advised Yale Law School students through the Media Freedom and Information Access Clinic and been the alumni mentor for the Senior Class Gift Campaign, showing students how they can remain engaged with Yale after their time on campus has ended – and demonstrating how one person can make a difference both through word and by example.

Mazzella has been a consistent and affecting presence at Yale, devoting his time and energy to the continued growth of the David Geffen School of Drama at Yale and helping its students succeed in their chosen craft. Throughout the 1980s, when the Yale Repertory Theatre was regularly transferring plays to New York, it was Mazzella who built the sets and coordinated the productions’ moves to Broadway. Soon thereafter, he joined the School of Drama as a visiting lecturer, serving as a mentor to his students and offering them – and many alumni after them – advice, encouragement, and summer employment. For those who ventured out on their own, Mazzella has provided financial support to help them realize their dreams. In addition, he was a founding member of the Board of Advisors, a group that contributes more than $1 million annually to the school, serving as its chair for more than a decade, as well as volunteering for the Yale Tomorrow Campaign. A generous advocate, Mazzella has directed his energy and philanthropy to the school’s most pressing needs, always with an eye on the student experience. In 2001, he founded the Laurie Beechman Center, a sound studio named in memory of his late wife, and in 2019, he underwrote visits by prominent directors to conduct charrettes with design students. Throughout, Mazzella has remained a tireless volunteer and devoted ambassador for Yale, positively impacting both school and university and forever changing the lives of so many of its students.

A university leader by every measure, Nelson has shined as both change agent and mentor, guiding the way for future leaders in public health and future alumni leaders at Yale. Passionate as a student, upon graduation he carried his drive to make a difference into his alumni efforts, organizing the African American Student and Alumni Network at the Yale School of Public Health to address the lack of minority faculty and insufficient support for Black students. He later joined the Association of Yale Alumni in Public Health (AYAPH) board of directors and became chair of its Minority Affairs Committee, petitioning to change the committee’s name to the Emerging Majority Affairs Committee and making it EMAC’s mission to ensure that the interests of the emerging majority were considered in all matters. He was subsequently elected president of the AYAPH and is widely credited with invigorating the board and establishing a strategic planning process that guides it still today. Nelson also served on the Yale Alumni Association Board of Governors and has been active with the YAA’s Careers, Life, and Yale program, the Yale Black Alumni Association, the Yale Alumni Fund, and as a School of Public Health alumni speaker, recruitment ambassador, and student mentor. In doing so, he brought together the school and greater Yale communities, building stronger bonds among alumni and creating a thriving, ethnically diverse climate to benefit all involved.

An alumna of many talents and a deep well of knowledge, Strickler has demonstrated exemplary and consistent service to Yale, serving as a guide in its environmental and conservation efforts and working diligently to advance the university’s academic mission. A quiet, thoughtful leader who delivers a powerful message, she has been an informal advisor to the Yale administration on climate change in addition to serving on the advisory board of the Yale Center for Environmental Law and Policy. She also is a prolific fundraiser and generous donor, utilizing these skills as a member of the Yale Tomorrow campaign committee, the Yale Task Force on Campaign Planning, and as co-chair of her 25th, 30th, and 35th Reunion Gift Committees. As co-chair of the Yale Development Council from 2014 to 2020, she provided instrumental leadership and guidance to more than 200 of the university’s top fundraising volunteers, training their focus on the mission of the university and the financial support needed to accomplish Yale’s priorities. Strickler also has acted as a mentor to younger volunteers, demonstrating an ability to be both an advocate and a catalyst to guide Yale’s goals and shape its message, further showcasing her desire to give back and her capacity to lead, all in the interest of creating a better university – and a better world – for the generations to come.