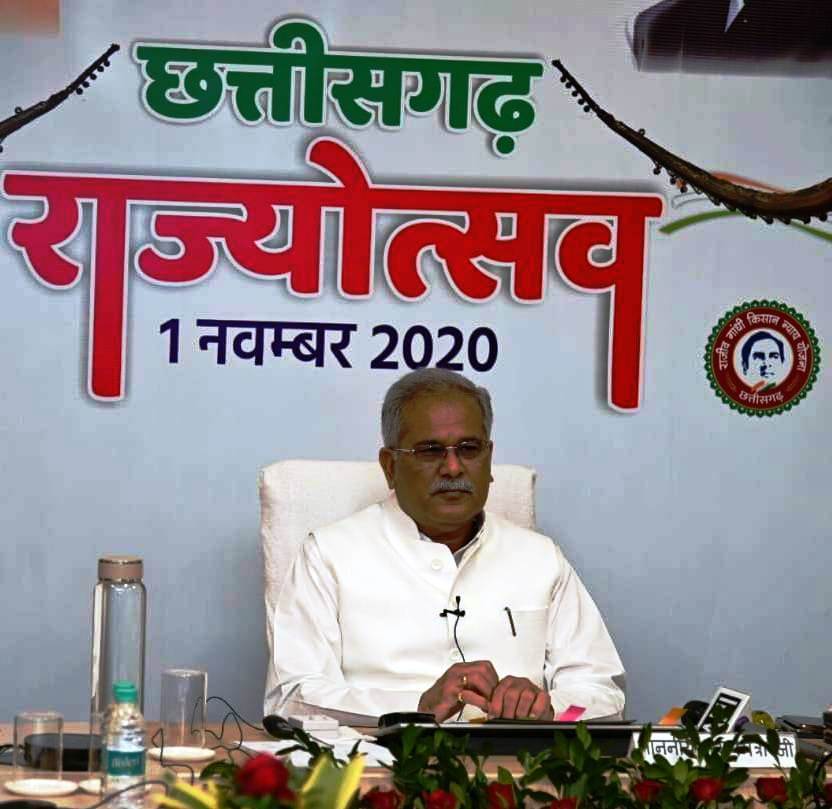 Raipur: On the occasion of Chhattisgarh State Foundation Day, Rs 1500 crore was transferred into the bank accounts of farmers as the third installment of Rajiv Gandhi Kisaan Nyay Yojana, in the virtual presence of Member of Lok Sabha Mr. Rahul Gandhi. In this Rajyotsav programme organized at Chief Minister’s Residence Office, Swami Atmanand English Medium School Scheme and Mobile Hospitals cum Laboratories were inaugurated in 30 urban slum areas of the state under Mukhyamantri Shahri Slum Swasthy Yojana, in the present of Chief Minister Mr. Bhupesh Baghel, Vidhan Sabha Speaker Dr Charandas Mahant, and Ministers.
Extending hearty greetings of State Foundation Day to people of Chhattisgarh, MP Mr. Rahul Gandhi said that farmers and labourers are the foundation of the country. Entire country is struggling in this time of pandemic, but the weaker section of the society is facing more difficulties and has become more vulnerable. He added that the condition of farmers in our country is no secret. News about farmers’ suicide is everywhere. We need to protect the rights and interest of our farmers and labourers, and stand by them through this difficult time. He said that foundation of city is the village, foundation of a village is the farmers-labourers. Hence to protect farmers and labourers of the country is to strengthen the foundation of the nation. The same way, children and youth are the future of the nation. Lack of better opportunities to youngsters will make our nation weak, said Mr. Rahul Gandhi.

Mr. Rahul Gandhi praised the initiatives taken by Chhattisgarh Government for welfare of farmers, labourers and poor people. He said that schemes like Rajiv Gandhi Yojana, Swami Atmanand English Medium School Scheme and Chief Minister Urban Slum Health Scheme will strengthen the foundation of the country. Mr. Rahul Gandhi further said that Chhattisgarh become an example for the entire country. Decisions taken by the Government to support farmers and protect their lands, promote industrial sector and make villagers-youth self-employed are exemplary. He said that under the leadership of Mr. Bhupesh Baghel, Cabinet and the entire team of supports are working with a vision. Chhattisgarh is emerging as a new model state for the country, because of the steps being taken in the state for protecting interest of tribal people, farmers, and better education facility for youth. He added that by starting English Medium Schools in the state, Chhattisgarh Government has made English medium education accessible for children and youth.

Speaking about the current situation of farmers in the country, MP Mr. Rahul Gandhi said that at present, farmers are struggling because their interests are being neglected. Talking about the three new agriculture laws introduced by Central Government, he said that krishi upaj mandi and minimum support price plays an important role in protecting the interest of farmers. He said that any system may have a few shortcomings, but that does not mean that it should be discarded completely, instead it should be improved and revised. He said that ever since mandi system was discarded in Bihar in year 2006, condition of farmers has only deteriorated. Pujab and Chhattisgarh are strongly opposing these changes. He said that Prime Minister should reconsider these three agriculture laws and requested reorganization of mandi system. I believe that Prime Minister will choose to reconsider on the subject, said Mr. Rahul Gandhi.
MP Mr. Rahul Gandhi said that Chhattisgarh is a unique state that is rich in water, forest and natural resources. Chhattisgarh is not a poor state. I am happy that under the leadership of Chief Minister Mr. Bhupesh Baghel, our government is working with determination to make people of the state as prosperous and abundant as Chhattisgarh is naturally.

In his address to the programme, Chief Minister Mr. Bhupesh Baghel extended hearty wishes to people of the state on the occasion of 21st State Foundation Day of Chhattisgarh. Mr. Baghel said that we have successfully begun the development of Chhattisgarh as per the vision of its creators while taking into account the expectations of common people in the state. In last 22 months, we have implemented schemes with the core objective of welfare and upliftment of poor, farmers, forest dwellers, tribal people and underprivileged people. Positive impact of these schemes have become evident in all the sectors. Our achievements in generating employment, agriculture production, groundwater table improvement, development of commercial and industrial sector, electricity production etc are being lauded at national-level. NITI Ayog and other policy maker institutions have praised the successful schemes related to nutrition, health, education and employment that are being implemented in tribal areas of Chhattisgarh.

Mr. Baghel said that in last one year, 67 thousand malnourished children have come out of the cycle of malnutrition, as a result of Mukhamantri Suposhan Yojana. Number of malnourished children in the state has declined by 13.79 percent. He said that we have succeeded in turning the vision of Mrs. Sonia Gandhi and Mr. Rahul into reality. Our sincere effort to realize Mr. Rahul Gandhi’s vision of justice in agriculture through Rajiv Gandhi Kisan Nyay Yojana has revolutionized the entire agriculture sector of Chhattisgarh and transformedthe rural economy. Mr. Baghel said that Rajiv Gandhi Kisan Nyaya Yojana is a unique example of how a scheme launched with the right intention can bring positive changes in the lives of people.
Referring to Godhan Nyaya Yojana, Mr. Baghel said that we have paid Rs 39 crore so far against procurement of cow dung. This has provided an additional source of employment and income to villagers in rural areas of Chhattisgarh.
Mr. Baghel said that we have taken concrete measures to save farmers of our state from the injustice caused by anti-farmer laws of Central Government. The Mandi Act has been amended and we have also taken important steps towards infrastructure and industrial development of the state. We have signed 25 MoUs for setting up industries and 22 new MoUs are proposed. This will lead to a capital investment of about 20 thousand crores in the state and about 36 thousand people will get employment due to the same. As a result of our consistent efforts, the Central Government has approved the scheme of converting paddy into ethanol in Chhattisgarh which will create additional income for our farmers. Ethanol production industry has a scope of Rs 10 thousand crores worth investment in the state.
Mr. Baghel said that today, in his virtual presence, MP Mr.Rahul Gandhi is transferring an amount of 1500 crore rupees to more than 19 lakh farmers in his account under Rajiv Gandhi Kisan Nyay Yojana. We had transferred the previous two installments of Rs 1500 crore each to the farmers on 21 May and 20 August. Under Swami Atmanand English Medium School Scheme, we are starting 52 English medium schools, where education will be provided free of cost. So far, 27 thousand 741 children have taken admission in these schools. Mr. Baghel said that he is also launching an important health plan for the citizens living in slums, under which, citizens and workers living in slum areas will be provided day and night medical facilities.
The virtual program of the Rajyotsava was conducted by Agriculture Minister Shri Ravindra Choubey and Vote of thanks was proposed by Minister of Home Affairs, Mr. Tamradhwaj Sahu. The program was attended by Assembly Speaker Dr. Charandas Mahant, Cabinet Minister Mr. Mohammed Akbar, Dr. Premasay Singh, Dr. Shiv Kumar Dahria, Mr. Amarjeet Bhagat, Mr. Kawasi Lakhma, Mrs. Anila Bhendia, Guru Rudra Kumar, Mr. Umesh Patel, Rajya Sabha MP Mrs. Chhaya Verma, Senior MLA Mr. Satyanarayan Sharma, Media Advisor to the Chief Minister Mr. Ruchir Garg, Chief Secretary Mr. RP Mandal, Additional Chief Secretary Mr. Subrata Sahu and other senior officials were present. Leader of Opposition Mr. Dharamlal Kaushik, MP Mr. PL Punia and MLA Mr. Mohan Markam, along with other MLAs, public representatives from the districts also participated in the programme through video conferencing.

University of Adelaide: On the search for the secrets of southern sky

iednewsdesk Jun 6, 2022
The next steps are being taken to unlock the secrets of the universe above the southern hemisphere. University of…

Ural Federal University: Lichens Adapt to the Substrate on Which They…