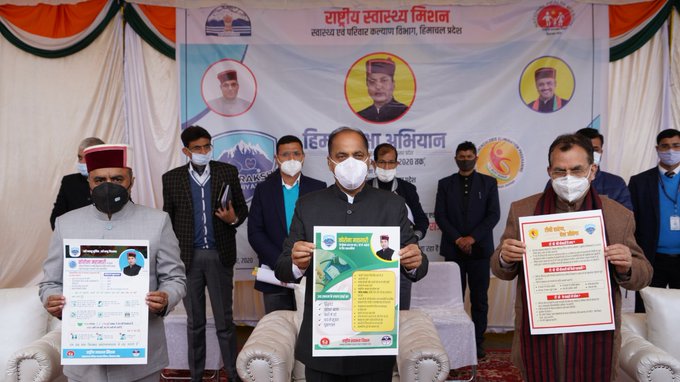 Shimla:Chief Minister Jai Ram Thakur today launched ‘Him Suraksha Abhiyan’ to sensitize the people regarding Covid-19 pandemic and to collect information regarding symptoms of diseases like TB, Leprosy, sugar, blood pressure etc. by door to door campaign in the State. This campaign is being launched from 25th November to 27th December, 2020 throughout the State.

Jai Ram Thakur said that about 8000 teams comprising of Health, Ayurveda, Women and Child Development, Panchayati Raj Departments, District Administration and NGOs would be involved in this campaign which would ensure door to door data collection of health parameters of the people. He urged the people of the State to provide wholehearted support to the health workers by providing them accurate information about their diseases and health parameters.

The Chief Minister said that not only symptomatic patients with probable Covid-19 would be detected through this campaign but patients with other ailments would also be listed through campaign. He said that this would help in providing them better health services. He said that the State has already been ranked as best State in the country in effective implementation of TB eradication programme for the year 2019.

Jai Ram Thakur said that although the number of Covid-19 patients and deaths related to COVID-19 has witnessed a sharp spike during the last about one month but still the situation was under control. He said that there was no dearth of essential medicines and equipments like oxygen cylinders and isolation beds in the State. He said that the main reason of this increase in number could be attributed to social functions and a bit laxity by the general public. He urged the people of the State to use face masks in public places and maintain social distancing to keep them away from this virus.

Health Minister Dr. Rajiv Saizal urged the people to play pro active role in making this campaign a success. He also thanked the Chief Minister for evincing interest in strengthening health infrastructure in the State.

Secretary Health Amitabh Awasthi welcomed the Chief Minister and detailed about salient features of the campaign.