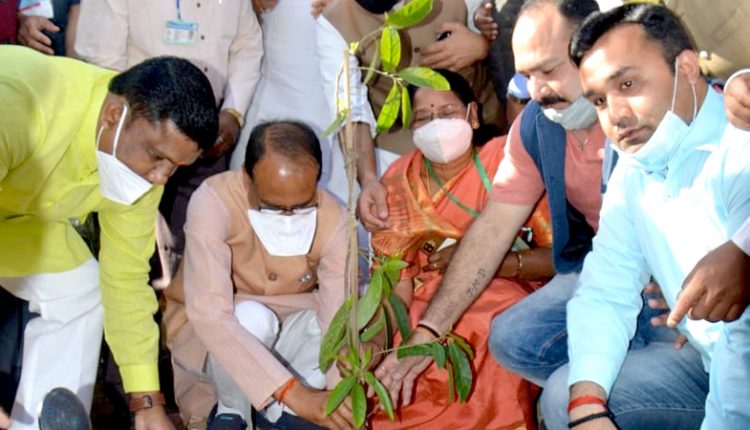 Bhopal : Chief Minister Shri Shivraj Singh Chouhan is widely hailed as a people-friendly and sensitive Chief Minister. Now he is also known as a lover of environment. Recently in Amarkantak he had pledged to plant a sapling every day to protect the environment. In order to fulfill his resolve, on the second day of his stay in Jabalpur, he planted a sapling of Rudraksha in the circuit house premises. Chief Minister Shri Chouhan started his daily routine by planting a sapling and appealed to the people to plant a sapling every day and on auspicious occasions in life to save the Earth.

The plant of Rudraksha is regarded as a symbol of faith. It is considered a sacred tree. Garlands of its fruit are also worn. It is widely believed that Rudraksha originated from the water drops in the eyes of Lord Shankar. Rudraksha is the boon of Shiva, which was revealed by Lord Shankar to overcome the physical sorrows of the world. Wearing Rudraksha gives positive energy. Rudraksh is usually worn by the devotees as a protective shield and also for chanting the Om Namah Shiva Mantra. Its seeds are mainly used as organic ornaments and garlands in India and Nepal. It is also believed that Rudraksha is as valuable as semi-precious stones.