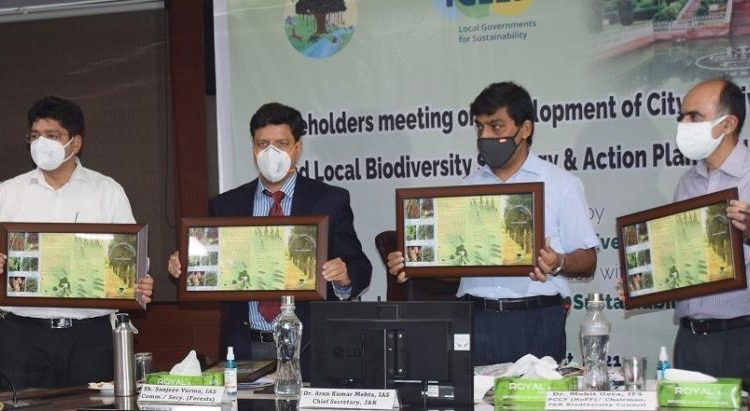 The event was organised by the Jammu & Kashmir Biodiversity Council in collaboration with ICLEI- Local Governments for Sustainability, South Asia.

Pertinently, ICLEI – Local Governments for Sustainability is a global network of more than 2500 local and regional governments committed to sustainable urban development and is active in more than 125 countries.

Speaking on the occasion, Chief Secretary congratulated all for institution of the index saying that it should serve as a self-assessment tool for measurement of various ecological benchmarks.

The J&K Biodiversity Council, along with others, will help formulate Biodiversity Index for Jammu city to help measure “ecological health” of the city. Jammu and later Srinagar, city would be one of the very first in the world to adopt the index. Similar event has been scheduled for Srinagar city later this month.

Chief Secretary said that such indices prove as tools for smart framework of innovations and stressed that the data used should be specific, relevant and measurable.

Chief Secretary hailed introduction of the index by the UT administration and said, ‘measurement is imperative to performance’. Unless we measure data points, we cannot work towards improvement in any aspect, he emphasised.

Arun Kumar Mehta said that the index needs to be made comprehensible and acceptable to the public, who constitute majority of the stakeholders. He called life a gift of nature and said that only a city with healthy eco system can sustain all life forms.

He urged upon the Biodiversity Council to learn from similar indices from cities around the world and implement them according to local viability and acceptability. He also called upon other departments and independent bodies to play active role in addressing ecological issues of the region.

Chief Secretary directed routine measurement and publicity of air and water quality index of prominent tourist spots of J&K. He called for creating awareness about local species of flora and fauna through literature and other means.

Chief Secretary asked for prompt disposal of forests related cases. He directed the Forest Department to develop 75 treks all over J&K as part of the Azadi Ka Amrut Mahotsav, including development of forest rest houses.

It was directed that the department present a strategy and action plan for quick restoration of degraded forests of the UT. Bio-fencing of wetlands and constitution of eco-clubs was also called for by the Chief Secretary.

Arun Kumar Mehta assured that the administration is wholeheartedly investing in development of a Riverfront project at Jammu and the same would be completed over a period of one year.

In his address, Commissioner Secretary, Department of Forest, Ecology and Environment, Sanjeev Verma, reminded all of the global environmental challenges as highlighted by the 6th IPCC Report and called for paradigm shift and greater participation for meeting the global challenge. He also informed that degraded forests over 3.5 lakh hectares of land would be restored in coming five to six years by the UT administration and said that the decade would be dedicated towards environmental restoration.

Programme Coordinator, Monalisa Sen, from ICLEI South Asia also conducted a one-day workshop for all DFOs, members of J&K Biodiversity Council, NGOs and students among others.