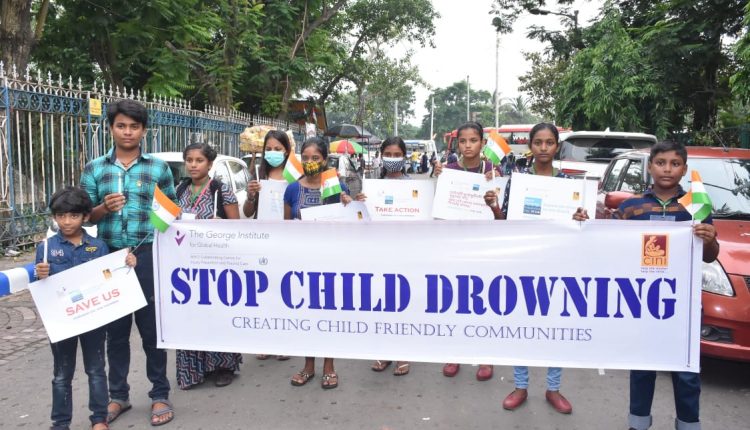 Kolkata: National level NGO Child In Need Institute (CINI) launched a Drowning Prevention Campaign “Freedom from Drowning”, an initiative for the children of Sundarbans to save them from drowning. CINI also organized an interactive session with the children from Sundarbans at the Kolkata Press Club and highlighted the risk factors and need for more accurate and effective data collection on drowning deaths.

Child Speakers from different Child Parliaments of Sundarbans were present to share their own perspective regarding pain of child death, their sufferings and emotions and called on the Administration to create a child friendly community to save them from Drowning and make a national drowning prevention plan to prevent unnecessary and avoidable deaths at the event. The children also took out a Candle March in memory of those who died due to drowning in the region.

Every story consists of a background even before it starts getting scripted. This initiative too has a background to itself which started around two years back. The river-bank areas of the Sundarbans and the assorting settlements and villages lying across the areas had been experiencing child drowning casualties since quite some time which had been disrupting the environmental balance of the villages from the socio-economic and psychological perspective as well. CINI had recently organized a ‘Child Parliament’ initiative in Sundarbans with a Children’s Rights based approach to promote decision-making processes that are more collaborative and inclusive for children. It created an enabling environment for these children to voice their ideas, thoughts and feelings through the ‘Child Parliament’. More than 12 Child Parliaments were organized in different parts of Sundarbans Region and around 800 children participated and shared their views like teaching swimming and rescue techniques to prevent child drowning.

As India gets ready to celebrate its 75th Independence Day, families in Sundarbans still live in captivity of fear for their children because more than 75 children die due to drowning every month in Sundarbans. With just the passing of the midnight stroke shall be the 75th Independence Day for the world’s biggest and most diverse sub-continent India. And on the afternoon before, the interiors of the old and reputed Calcutta Press Club become lively and cheerful with the energy and enthusiasm of some little kids who are totally new to all the grandeur of the city of joy. The kids have come from extremely rural areas of the Sundarbans. These children are in reality, the elected ministers of the Child Parliament built up at various remote blocks of Sundarbans by the initiative taken by the nationally-aided Non-Government Organisation, Child In Need Institute (CINI). Apart from them are present here today, some street-faring kids of the city and others.

Dr. Samir Chaudhuri, Founder Secretary, Child in Need Institute, said, “Our mission is to ensure that children and adolescents achieve their rights to health, nutrition, education, protection and participation by making duty bearers and communities responsive to their well-being. This Campaign is based in one of our strong preventive approach to ensure child participation.” CINI’s Preventative Approach towards Child Protection in India or preventing harm by intervening before it occurs.

Sujoy Roy, Sr. Advocacy Manager, CINI said, the most recent data reveals that West Bengal is among the top five performing states in the country and better performance across all indicators as compared to all India average. New Natal Mortality rate (15.5 SDG Target 12) Infant Mortality Rate (22) and under -5 mortality rate (Currant 25.4 SDG Target 25) has also lowered in recent past. Successful implementation of few government schemes like JSKK, Sishu Sathi played crucial role to avoid such unnecessary deaths. If we can arrest these avoidable tragic drowning deaths then it may give a boost to this momentum. We believe, it will show a new, more effective, ethical and cost-effective way to solving problems of children in Sundarbans and contribute to achieve SDG3.2.

The golden rays of the setting sun could be seen spreading across the west sky peeping behind the towering head of the monument. After a long meeting at the press club, the eyes and faces of the little children could be seen equally glowing like pure gold, matching in glamour and glow with that of the beautiful dusk sun. Today witnessed the silent oath taken by the little innocent children standing firm and confident against the embracing breeze of the passing dusk. They may not be qualified enough to vote for their needs on the official platform, but that won’t let them stay back in the race for survival and to live a successful and worthy life. Sathi, and many other children like her, shall be the glowing examples, who shall help the upcoming generation stand firm on their legs despite thousands of adversities and succeed in dreaming a bright future. Not only will they dream, but shall slowly progress in the fight with little steps to fulfil their dreams. These children shall one day come forward to take the duties of the society on their own shoulders and fight or the causes of many other children just like them. With a heart full of dreams, beliefs, and courage, today witnessed the start of a new journey!

Tears of sorrow and regret slowly clouded the eyes, as the light of the candle flames reflected the pain that held in our hearts as we stood in remembrance of those little innocent souls who got lost from the laps of their mothers and from the world forever. It was our duty to make sure they lived a happy and fulfilling life, and it is us who failed to provide them one.

Let nobody need to burn another candle. Let the little eyes filled with dreams and souls filled with innocence stay safe and secure within protective arms to live till the end of time. Let dreams find their way towards sunshine, let the glow of these children shine bright before the world. Not death, let life find its way! A way towards a bright, happy and a golden future spreading its wings across the dusk sky!

The Child In Need Institute (CINI) is an Indian non-government organization (NGO) regarded as one of the pioneering institution working for poor children in India. CINI’s journey started way back in 1974, when Dr. Samir Chaudhuri, a pediatrician, decided to dedicate his life to help the children and women in need. The path has not been smooth and easy. Several hurdles along the way only made its determination stronger which helped to reach out to poor and vulnerable children in the areas of health, nutrition, education and child protection. In 47years of activity, CINI has reached thousands of women and children, with preventive solutions through a children’s rights-based approach. CINI works in 8 Indian states that include: West Bengal, Jharkhand, Orissa, Assam, Tripura, Arunachal Pradesh, Nagaland and Manipur, through close to 1200 local staff, reaching about to 14 million people living in poor rural and urban communities.

In memory of the struggles and sacrifices of our people, 14th August will be observed as Partition Horrors Remembrance Day: PM Narendra Modi