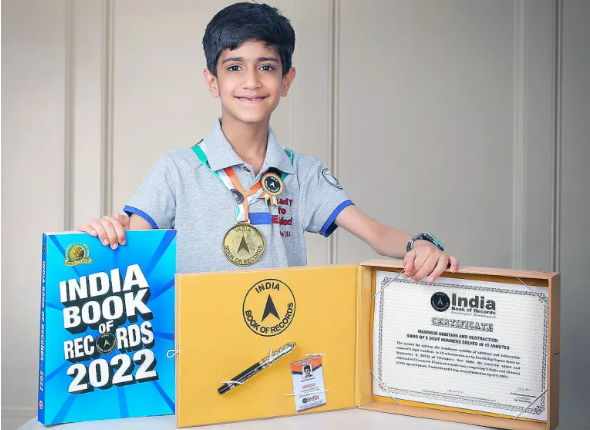 New Delhi : A student of class IV from Apeejay School, Pitampura, Paarth Raj Kapoor, earned a place in the ‘India Book of Records 2022’. This exceptionally talented 8-year-old solved thirteen complex 5-digit calculations within the set time. Each sum comprising 5 digits and 10 rows.
This math genius began with his practice one month prior to the test. It took him around 27 minutes initially to solve the problems. However, with his resolution and focus, Paarth was able to quickly and accurately solve complex mental calculations. His concentration enabled him in solving complex math problems in much lesser time.
The process took place online and participants were expected to undergo three rounds. Much to the selectors’ amazement, he successfully completed the calculations in just 8 minutes and 20 seconds. He secured his place in the first round itself owing much to his incredible timing and sharp calculations skills.
The teachers at Apeejay School realised his potential in performing high-level calculations. They recommended the parents to enrol in ‘India Book of Records 2022’. Due to the pandemic the entire procedure took place online via Zoom. The upper time limit allocated to participants of his age was 15 minutes.
India Book of Records, since 2006, recognises the creative and unique talent of India.
Paarth has been practicing and learning the Abacus technique for three years. This enabled and trained him to solve complex math problems. He is specifically fond of addition and subtraction calculations. Even at this age he follows a routine and ensures practicing Abacus daily for 30 minutes. He loves to play Badminton and enjoys physical training classes at school.
His mother, Ms Sonia Kapoor elaborated that Paarth has a natural inclination towards mathematics, especially the addition and subtraction of numbers. He often likes to do mental calculations in his spare time. She added, “During the pandemic the entire family was getting accustomed to the work from home environment. All members followed a schedule in terms of their work, studies and watching television to maintain the kids’ discipline.”
Talking about his inspiration, this math genius is inspired by elder brother, Daksh Raj Kapoor who studies in class VIII at Apeejay School, Pitampura and teachers.
Paarth is particular about his Math class and never misses them. He was regular even in the online learning mode and achieved a 100% attendance record. He wants to be a mathematician one day. Paarth added, “I will participate in the Asia Book of Records and eventually Guinness too.”

University of Cambridge: No ‘safest spot’ to minimise risk of COVID-19…

iednewsdesk Jun 23, 2022
Researchers have demonstrated how airborne diseases such as COVID-19 spread along the length of a train carriage…

University of York: Free School Meals criteria needs to be widened to…

University of York: Staffing and ‘siloed’ working a barrier to care of…

University of York: Researchers identify how robotics and autonomous…

University of York: Researchers find way to target cancer while…