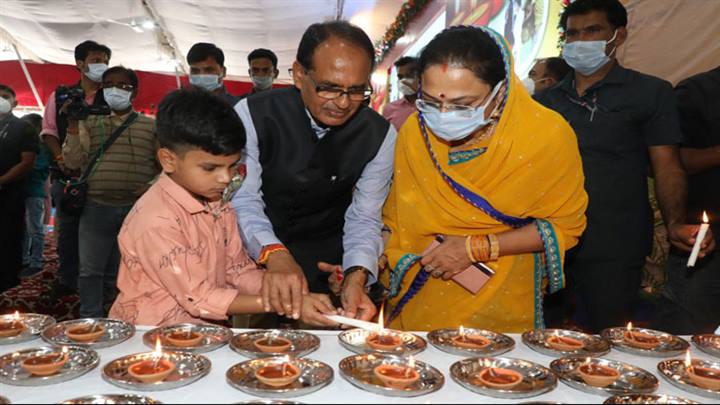 Chief Minister Shri Chouhan told the children that I know your suffering. Parents are invaluable assets. There will be a feeling of their absence, but there is no need to be sad. By studying well and doing some good work in life, you have to bring laurels to their names. Chief Minister Shri Chouhan told the children that many great people of the world had lost their parents in their childhood, but they got a special place in life. Pandit Deendayal Upadhyay is also among such people. While living in painful conditions, he studied seriously and became a successful person. Chief Minister Shri Chouhan said that one has to forget the past and move ahead in life. You all go ahead. You will not have to face any difficulties. Proper arrangements have been made for your study. The government will be with you in deciding the path of life in future also.

Chief Minister had an intimate dialogue with the children

Chief Minister Shri Chouhan also narrated three inspiring stories to the children who lost their parents in Corona. These included the stories of the disciple Arjuna while receiving education from Guru Dronacharya, the conversation of mother and child with Mahatma Gandhi and Yudhishthira’s implementation of the teachings received from the Guru.

Story one – Chief Minister Shri Chouhan told the children that Kauravas and Pandavas were taking education of archery with Guru Dronacharya. The Guru’s method of taking the test was also of its own kind. Showing a bird sitting on a tree, he told the students that you have to hit the target by aiming at the eye of this bird. Along with this he asked the students one by one what do you see in front of them. Duryodhana, Dushasana, Nakula, Sahadeva and other disciples said that they could see the tree, the leaves were visible, the flowers were visible. But when Arjuna was asked what do you see, Arjuna’s answer was that I can see the bird’s eye. Chief Minister Shri Chouhan said that the essence of this story is that we have to focus only on the goal.

Story two – Chief Minister Shri Chouhan told the children that once a mother had reached Gandhi ji with her child. Mother said that this child eats a lot of jaggery, please advise him not to eat so much jaggery. Gandhiji did not give any advice on the first day. This went on for three or four days. After this, on the request of the mother, Gandhiji explained to the child that it is not appropriate to eat more jaggery. The child’s mother asked Gandhiji that you could have explained this thing even on the first day, then why did you explain this thing only after four days? Gandhiji’s reply was that on the first day, I did not have the right to say to the child that do not eat jaggery. The reason for this was that I myself eat jaggery every day. Now if I explain this thing to the child, then first I should implement it myself, only then I will be able to tell someone not to eat jaggery every day. The essence of the story is that if you tell someone something, first learn to implement it yourself

Story three- Chief Minister Shri Chouhan while narrating the third story to the children told that once Yudhishthira could not learn the text of the lesson “Speak the truth always”. Yudhishthira was asked by his guru to come after learning this lesson tomorrow. Many days passed, Yudhishthira could not learn the lesson. After this Guruji got angry and asked Yudhishthira why you are not able to memorize this lesson? Yudhishthira replied that if he used to say something every day, then some untruth would come in that matter. When you asked to memorize the lesson “Speak the truth always”, it meant that you have to show it by doing so. If I can’t tell the truth, then how can I assume that I learn the lesson? The essence of this story is that whatever education you get in life, you should also implement it.

Served dishes to children, fed them with his own hands and ate with children’s hands

Smt. Sadhna Singh gave information about kitchen garden and cowshed to the children

Chief Minister Shri Chouhan told the children about the importance of plantation done by them in the garden of the residence and inspired them to plant trees. Gave information about Panchayats and other programmes held at the Chief Minister’s residence. Smt. Sadhna Singh informed about the vegetables grown in the kitchen garden. Along with this, while visiting the cowshed, she told that Dhanwantri, a cow here, has given birth to a female calf two days ago. Chief Minister Shri Chouhan informed the children about the medicinal trees and plants planted in the garden near the gaushala.

Climate education in the spotlight at COP26: Ministers of Education and Environment meet for historic event