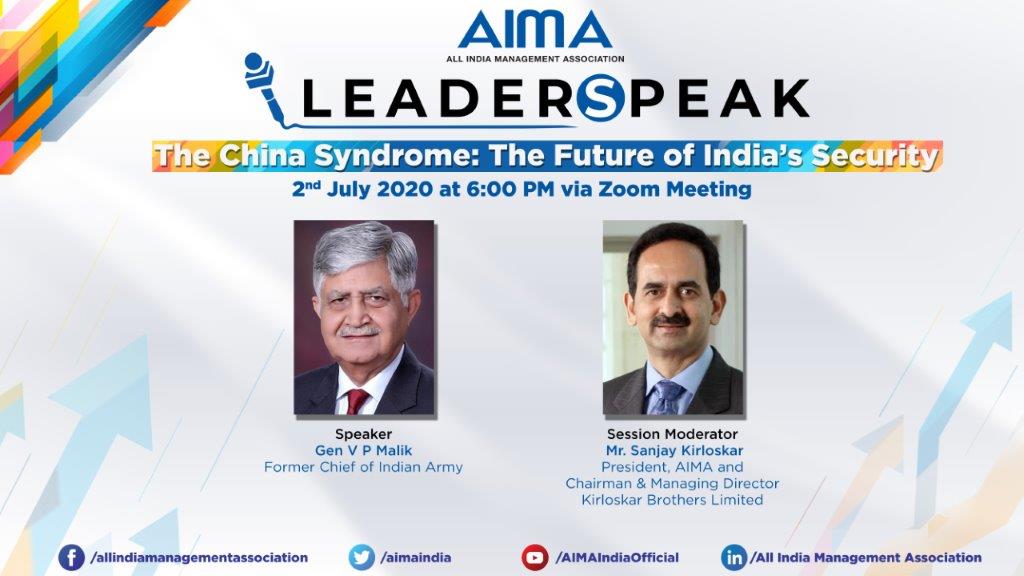 New Delhi: General V P Malik, Former Chief of Army Staff, says that it is time for India to reset and recalibrate relations with China. “For too long, India has hesitated to impose cost on China. Time has come to dispel China’s assumption that its aggression will bring us to the negotiating table and concede something for the sake of peace,” he said during the LeaderSpeak programme organized by All India Management Association (AIMA). “China has become India’s number one security threat,” he declared.

Mr Kirloskar pointed out that China was showing great confidence by taking on all its neighbours on all sides at the same time. General Malik said that India needed to have good relations with its neighbours and keep an eye on their relationship with China. “We cannot give them total freedom. We need to remind them of our national interest,” he said. He also advised working with other countries to isolate China internationally.

Talking about the anxiety about China’s military strength, General Malik said that though Chinese forces were superior in technology, India had better men behind the gun. “Indian troops are more committed and experienced in mountain warfare,” he said.

India’s line of control with China will now become like the line of control with Pakistan, General Malik said. “Himalayan border requires ramping up of military capability to dissuade China,” he said. “Earlier we never thought of a two front war. Now, we are thinking about it,” he added.

Commenting on a suggestion to change India’s nuclear weapon doctrine of no first use to deter China, General Malik said that several Indian governments have considered that and decided to stick with the existing doctrine. “The present policy is the right thing as a declared policy,” he said.

On the timing of Chinese aggression and its coincidence with economic difficulties in that country, General Malik said that leadership tries to divert the attention of the people during times of economic difficulties. “May be that is why China is taking panga with all its neighbours,” he remarked.

General Malik attributed China’s recent territorial encroachments to President Xi’s promise to the Chinese people to restore territories that belonged to the Middle Kingdom in medieval times. He said that China sees Ladakh, Arunachal, Sikkim, Bhutan and Nepal as five fingers of the palm that is Tibet. He said that China has its eyes on border areas in Himachal and Uttarakhand also.

On the issue of China building a dam to control waters of Brahamputra, General Malik said that 60%-65% of the water in the river was contributed by rainfall on the Indian side of the Himalaya and a Chinese dam will not stop Brahamputra’s flow.

Diplomacy should be given full chance to resolve the Galwan valley faceoff despite talks not yielding satisfactory results so far, General Malik advised. “Any application of force will escalate rapidly…It can become a Kargil like situation,” he said. However, he does not see the two nuclear nations opting for a full- fledged war.