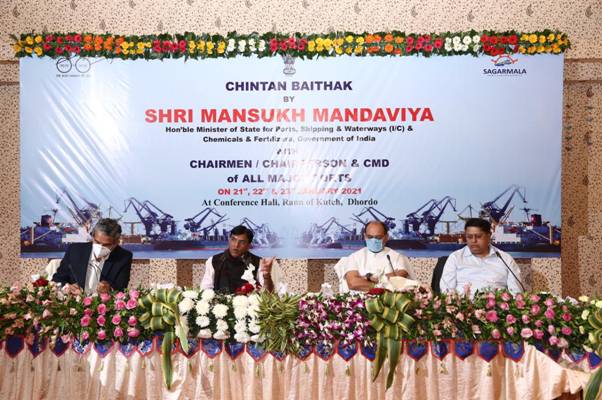 Kutch: The three day ‘Chintan Baithak’ of Ministry of Ports, Shipping and waterways is concluded today. Chintan Baithak is an extensive brainstorming session, chaired by Shri Manuskh Mandaviya, Minister of Ports, Shipping and Waterways with chairpersons of all Major Ports and senior officials of the ministry. It was held from 21st January to 23rd January,2021in The Tent City- Dhordo, Kutch, Gujarat.

MDAE extends its academic collaboration with the Gokhale…

Possibilities of restructuring Indian Ports Association, Creating India’s first ever Maritime Arbitration Center to resolve maritime disputes in India itself instead of going to other countries were explored. Probabilities of establishing satellite Ports for reducing the congestion and burden on Major Ports and attracting more cargo were also discussed.

Proposed domestic and international routes of Ro-Ro and ROPAX Ferry Services were reviewed.While reviewing new proposed locations of Seaplane operations, it was noted that Expression of Interest (EOI) of Seaplanes has received overwhelming response.The ways to improve the share of movement of coastal cargo were explored.The roadmap of Manpower Planning up to 2035 in all Major Ports was also examined.

In his closing remarks, Shri Mansukh Mandaviya said, ‘‘Our larger goal is to regain the India’s maritime glory. With this Chintan Baithak, the coordination between all Major Ports will be more streamlined and will be able to work with more synergy to achieve common goals. On the concluding day of Chintan Baithak, I am happy as well as hopefulas Maritime India Vision-2030 is finalized and ready to be implemented soon.Iadvise Chairpersons of all Major Ports and officials to work with optimism, dedication and motivation to put India on the world map as the maritime leader”

“When Article 370 was abrogated, oppressed people of Jammu got their rights back”

MDAE extends its academic collaboration with the Gokhale Institute of Politics &…