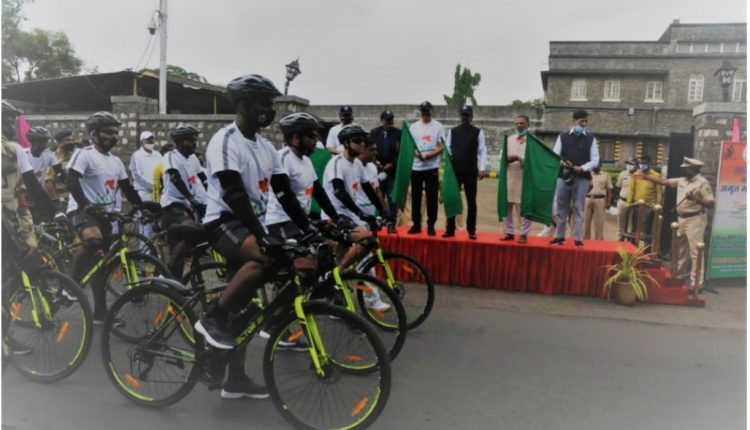 New Delhi: As part of ‘Azadi ka Amrit Mahostav’ celebrations, Central Industrial Security Force (CISF) is organising 10 cycle rallies in different parts of country. All the rallies will terminate at Rajghat, New Delhi, the Samadhi of Mahatma Gandhi, on Gandhi Jayanti, 2nd October 2021. The rallies are being organized with a focus on the youth of the country to get them connected with the brave stories of our freedom fighters and with the sacrifices made by unsung heroes of India’s freedom movement.

The longest of the 10 rallies has been flagged off today, 4th September 2021, from Yerawda Jail, Pune. Yerawda Jail is the place where historic Poona Act was signed when Gandhiji fasted to protest against Communal award. He was housed three times in this jail, including in 1932 and in 1942 along with many other freedom fighters, during Quit India Movement.

Embassy Group renews its MoU with the Government of…

The route plan of the cycle rally has been prepared to include significant historical places associated with the freedom movement. The cycle rally started from Yerawda Jail Pune and will terminate at Rajghat, Delhi covering a distance of around 1,703 kilometres, over a period of 27 days. The cycling team contingent consists of total 26 CISF personnel, comprising 10 cyclists and 16 administrative support staff, along with two vehicles.

En route, the rally visited Aga Khan Palace, Pune, where Mahatma Gandhi was kept in confinement during freedom struggle. This is the place where Gandhiji lived for 21 months after he gave the call for Quit India on 8th August, 1942. During this period, the Mahatma lost his wife Kasturba and his secretary Narayan Desai. The Samadhis of both of them are located in this grand palace of Pune, built by celebrated architect Charles Correa.

The rally will also visit Rajgurunagar, birthplace of freedom fighter Rajguru, tomorrow. It will pass also through Santwadi, Sangamner, Indian Security Press in Nashik, Chandvad, Arvi town and Shirpur Fata in Maharashtra.
On the 15th day, the cycle rally will reach Bhopal. The team of cyclists led by Sub Inspector Dhiraj Kumar Janice will cross over to Agra in Uttar Pradesh from Dholpur in Madhya Pradesh on the 24th day.
Some of the historically significant places being covered by the rally are Rajgurunagar (birthplace of freedom fighter Rajguru), Bhavra in Madhya Pradesh (birthplace of Chandrashekhar Azad) and Shivpuri (death place of Tatya Tope), also in Madhya Pradesh.
The event is being organized while strictly following COVID protocols.