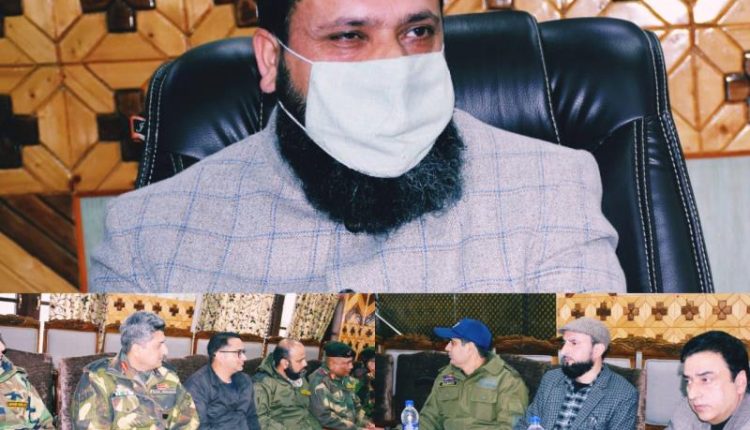 The meeting discussed threadbare various issues pertaining to welfare and development of people living in far off areas of Kupwara.

The Police and Army officers gave detailed feedback to the DC about the basic requirements of the people in their jurisdiction with regard to communication, health facility and education.

The DC said that there is a need for constituting a Rapid Response Committee with a mandate to ensure coordination between different levels of officers for greater redressal of public issues.

Referring to the issue of construction of bunkers in border areas, the DC said that the District Administration is constructing Community as well as Individual bunkers involving a cost of Rs.20 crore in vulnerable border areas of Karnah, Keran and Machill.

He also said that Public Outreach Programme initiated by Government is becoming a best forum for public as well as Administration where people register their demands and simultaneously Administration provides awareness about different schemes envisaged for the welfare of the people.

Regarding development of tourist place Bangus, the DC said that the area is cent percent forest land and the Administration is putting all possible efforts to keep the scenic beauty of the spot pollution free.

Regarding NCC, the DC said that the Chief Education Officer shall be directed to coordinate with the concerned authority for enrolment of students in the NCC training.

Earlier, ADC informed the meeting about the constitution of the Forest Rights Committee at different levels.

University of Nottingham: Study will examine extent of pollutants left by…

iednewsdesk Jan 22, 2022
Experts at the University of Nottingham will look at the extent of pollution in and around abandoned lead mines…

KTH Royal Institute of Technology: Growing ratio of women to men in…

University of Southampton: Impact of the pandemic on rural shopping…