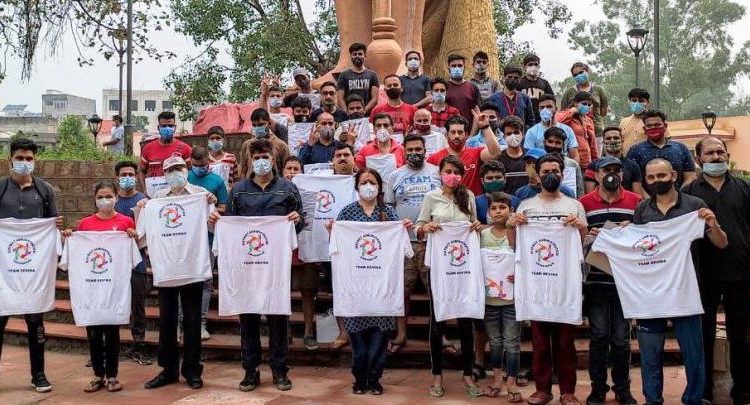 “Clean Devika” a people’s movement on rise in Udhampur

UDHAMPUR : An unprecedented enthusiasm has been witnessed among the people of Udhampur to clean and purify the sacred Devika River, which is also a heritage of Udhampur town.

The Devika project has acted as a catalyst and provided impetus to the cleanliness drive which has become a revolution in itself as more and more people are coming forward to help in various ways to clean the river Devika.

Team Devika, under the leadership of Deputy Commissioner Indu Kanwal Chib played a leading role in the sensitization and mobilization of the common masses to come forward and accept the responsibility of cleaning the river with their own hands. The DC said that as part of the sanitation drive and to make it a “Jan Kranti” or a people’s revolution, different IEC activities regarding “Save Devika” will be organised by district administration on a daily basis.

It is pertinent to mention here that the sanitation drive started by Team Devika has seen an unprecedented enthusiasm from the people of Udhampur and a surge in the number of people coming forward to give “Shramdaan” on voluntary basis by cleaning the river themselves every Sunday from 7 am to 9 am.

This includes large scale participation of the elected councilors, students, Senior Citizens, members of Beopar Mandal, priests from nearby temples, government officials and media persons. Different sections of society came together and joined hands and participated in the awareness campaign to mark the beginning of this Jan-Kranti.

The priests present said that the river holds religious significance as it is revered by Hindus as the elder sister of river Ganga. They said it’s not only the responsibility of the government to clean the river but the general public must not make the river dirty by throwing garbage, clothes, idols etc. They further added that it is highly uncultured and sacrilegious to make the river dirty on one hand and worship it on the other.

One of the volunteers of the Team Devika Mahesh Bangathia, said such initiatives are important to instill in people a sense of cleanliness and how they can play important roles to keep their surroundings clean. He further added that everyone should come forward and contribute to make Udhampur clean. One of the representatives from scouts and guides appealed to other organizations to come and join this revolution and clean river Devika.

Paras, a young boy, who also volunteered to clean the river, became an inspiration for other citizens to come forward and help in revolutionizing the cleanliness drive. Volunteer group from Jammu, ‘Climate front forum’ also joined the movement and appreciated the initiative of volunteers of Devika team for cleanliness and awareness drive.