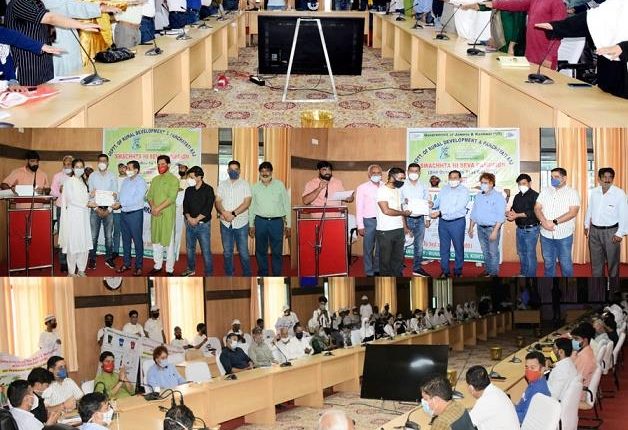 The main function which was held at the conference Hall DC office Complex Mini secretariat, where a month-long “Swachhta hi seva campaign” was launched by Deputy Commissioner, Ashok Sharma – the chief guest, in presence of guest of honour Principal Government Degree College Kishtwar Prof Anirudh Sharma and other district officer.

The programme was orgainsed by Department of Rural Development and Panchayati Raj in collaboration with NSS unit of GDC Kishtwar headed by I/C NSS Prof.Faisal Mushtaq Kichloo and Municipal Council Kishtwar.

Similar IEC activities were also held at block headquarters and in all government offices and Institutions.

The expedition was flagged off by SDM Padder Varunjeet Singh Charak , the chief guest of the occasion in presence of Dharminder Singh panch of panchayat Kundal Padder.

The senior Officers of district administration led by the Deputy Commissioner participated in Swachhta drive and disposed off the collected garbage through Municipality pick up vans.

At Doda: Celebrating the Birth anniversary of the Father of the Nation Mahtama Gandhi, a Swatchta Pledge taking ceremony was held in all the offices of the district.

Similar events were also organised in all the public offices, besides cleanliness drives were also carried out to mark the day.

In this rally about 200 students, 100 Teachers and about 30 NYCs from Ghat & Doda zones participated. The rally was led by District Information officer Mohammed Ashraf and DYSSO Mr. Jaffer Haider Sheikh.

During the plogging run about 50kg single use plastics was collected and disposed of at suitable places.

At Poonch: Nehru Yuva Kendra Poonch ( Ministry of Youth Affairs And Sports, Govt of India) in collaboration with District Administration and GDC Poonch formally launched activities under Clean India Program under the aegis of Azadi ka Amrit Mahotsav in the District.

The Youth wearing Hand Gloves and carrying biodegradable polybags, collected waste primarily Single Use Plastic waste in the polybags. More than 100 kilograms of waste including plastic waste was collected during the Run.

Deputy Commissioner Indu Kanwal Chib along with Devika army participated in the Swacchta drive and paid floral tributes to Mahatma Gandhi and Lal Bahadur Shastri on their birth anniversary at Devika Ghat.

The DC threw light about the teaching and philosophy of Mahatma Gandhi Ji. She urged the participants to follow the footprints of father of the Nation and carry out the message of peace, prosperity and progress. The DC appealed the general public to keep Udhampur district neat and clean.

Meanwhile Patnitop Development Authority observed the 152nd birth anniversary of Mahatma Gandhi with a host of activities in line with its cleanliness related initiatives including Green Patnitop Clean Patnitop, and Carry the Trash Back.

Beginning with Swacchta pledge to keep the surroundings green and clean, tourists and various officials gathered at Padora Meadows, Patnitop to pay homage to the Father of the Nation and his ideologies of non violence and cleanliness.

This was followed by a cleanliness drive at Padora, entire circular road, main meadow, VIP park and nearby areas in the jurisdiction of PDA.

Later, a plantation drive was held at Padora which saw enthusiastic participation from tourists as well.

At Rajouri: On the occasion of Gandhi Jayanti celebrations and as a part of various activities being carried out across the country under the nationwide clean India campaign, the National Development Organization in collaboration with DLSA Rajouri organised Swatchta Prabhat Pheri in which Swachata Express/ Garbage collection vehicle was flagged off by the Deputy Commissioner, Rajesh K Shavan.

The flag off ceremony was held here at the DC office complex.

In his address, the Deputy Commissioner recalled the contribution of the leader in freeing India from British rule and paid rich tributes to the Father of the Nation.

Rallies on Swachata hi Sewa were also organised in all the urban areas by the employees of the Urban local bodies and massive cleanliness drives were carried out in all the municipality areas by the sanitation workers joined by the public.