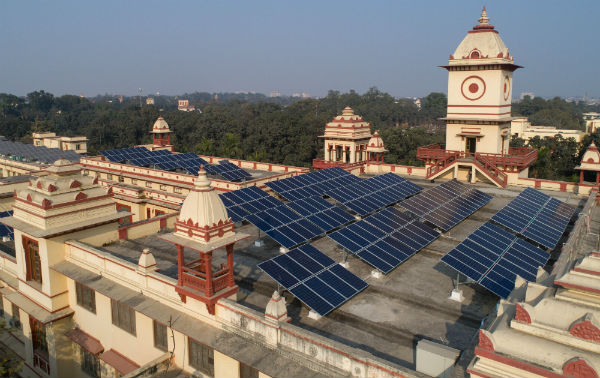 Varanasi : IIT (BHU), Varanasi, the premier technology engineering institute, in partnership with CleanMax Solar has commissioned a large-scale, Rooftop solar power plant across multiple building rooftops at its campus in Varanasi, Uttar Pradesh. With a cumulative solar capacity of 1.5 MW, the initiative meets an impressive 30 percent of the institute’s power requirements and allays over 2000 tons of carbon dioxide annually.
Based on the ‘Pay as you go’ OPEX model, CleanMax Solar will provide solar power to IIT-BHU, at tariff rates that are cheaper than the grid tariff, thereby saving the institute over INR 28 lakhs per annum, as compared to conventional sources of power.
Speaking about the association, Kuldeep Jain, Managing Director, CleanMax Solar said, “We are very proud to be associated with a distinguished institute like IIT (BHU) as its preferred sustainability partner. Through our partnership, we are helping IIT (BHU) to reduce their carbon footprint and electricity costs simultaneously. This is a very compelling proposition to institutes like IIT (BHU), and we hope to replicate it for other premier institutes across the country.
Mr. Jain further added, “As India’s largest Rooftop Solar Developer with 24% market share (Source Bridge to India Report 2017), CleanMax Solar has catered to educational institutes, large scale corporates and industrial clients, to help achieve their sustainability goals and reduce their operating costs. Through such partnerships, we hope that the next generations of professionals will be inspired to implement such systems across their individual fields of function.
Prof. Rajeev Sangal, Director (IIT-BHU) said, “IIT (BHU) believes in moving towards sustainable energy as our source of power. By commissioning the solar plant in association with CleanMax Solar, we are proud to be contributing towards the national goal of becoming a solar powered nation. The institute is expected to save around 28 lakh Rupees per annum, a significant operating cost reduction. As an educational institute, we also hope to create awareness about the solar technology besides being an environmentally conscious citizen.”
About CleanMax Solar:
CleanMax Solar is India’s largest on-site solar power provider. The company was founded in 2011, and since then, CleanMax Solar has successfully installed more than 200 projects for over 50 corporates, with a combined on-site capacity of more than 85 MW. CleanMax Solar is the #1 rooftop solar developer in India for the past three years, with a market share of 24% (as per Bridge to India 2017 report). CleanMax Solar also built Karnataka’s first open access solar farm, of 30 MW capacity, in the Tumkur district, and operates multiple solar farms to supply electricity to corporate consumers on an open access basis across the states of Karnataka and Tamil Nadu, with a combined capacity more than 60 MW.
Focused on corporate and institutional clients in sectors such as Automobiles, Education, Pharmaceuticals, Food & Beverages, and Information Technology, the company develops projects on a turnkey basis, providing power on a per-kWh basis, under long-term Power Purchase Agreements, at rates cheaper than prevailing grid tariffs. CleanMax Solar has been recognized by the Ministry of New & Renewable Energy (Government of India) with National Excellence Awards for Rooftop Solar Developer and Rooftop Solar EPC Player in 2016. In both 2016 & 2017, CleanMax Solar has been awarded RISE award in “Excellence in Solar Park” by Mission Energy Foundation.