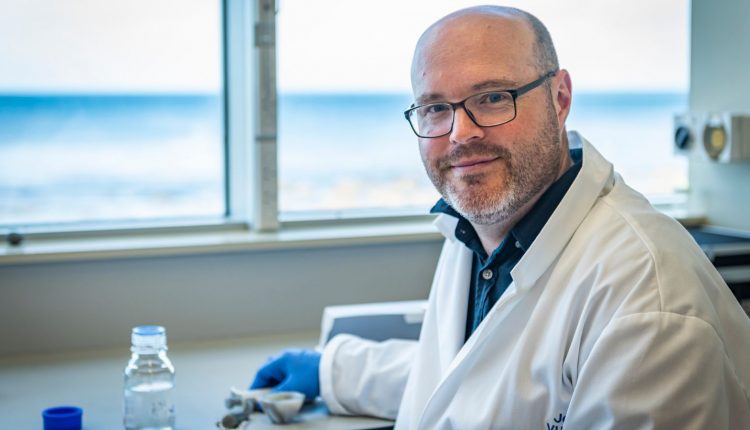 Dr Christopher Cornwall's MacDiarmid Emerging Scientist Prize is the latest of many successes for the University's researchers in the prestigious awards.

Dr Cornwall, in the School of Biological Sciences, becomes the third Te Herenga Waka researcher to win the $200,000 award.

His success follows the awarding last year of the top Prime Minister’s Science Prize to a team from the University’s Antarctic Research Centre, along with many other prizes to University researchers during the past 12 years.

Dr Cornwall’s research focuses on the impacts of climate change on the marine environment, specifically ocean acidification, which is caused by increasing anthropogenic carbon dioxide concentrations in seawater.

Ocean acidification is a major threat to marine ecosystems, as it impairs the ability of marine organisms to form calcareous skeletons, a process termed calcification. However, there is considerable variability in its effects.

The questions that irked were: why is there such large variability between species’ responses to ocean acidification? Can species acclimatise to its effects over one or multiple generations? And how will ocean acidification actually manifest on reefs globally?

“Ocean acidification reduces the growth of these organisms with calcium carbonate skeletons that have developed through calcification,” he says. “That poses a risk to the survival of temperate and tropical coral reefs that are built by those creatures.

“Coralline algae form the foundation of temperate and coral reefs and are also the required settlement substrate for the larvae of important species such as corals, sea urchins (including kina), and abalone (including pāua).

“Although coralline algae and corals are some of the most susceptible taxa to ocean acidification, we did not know why. Neither was it clear how reduced calcification in the future would affect reef growth.”

Dr Cornwall says he “pushed the boundaries” to answer the questions.

“There’s been intense debate between chemical and biological models that attempt to explain why calcification declines due to ocean acidification. But the science community did not have methods to understand how coralline algae and coral regulate carbonate chemistry internally.

“We knew boron isotopes could determine this for corals, but not for coralline algae. I developed the same techniques for those but pushed it further, showing that for both organisms acidification altered the chemistry of the calcifying fluid where calcium carbonate skeletons grow.

“However, there were also resistant species with traits that allowed them to carry on precipitating calcium carbonate even in more acidic oceans,” he says.

This resistance could not be gained in one lifetime but was found to have built up across several generations of exposure to acidification.

“Coralline algae were completely resistant after being grown under ocean acidification for six generations. However, individuals grown under control conditions for the same length of time did not display the same resistance to its effects when we placed both populations into acidification treatments at generation seven.”

Another team led by Dr Cornwall has undertaken a global study of the impact of acidification and ocean warming on coral reefs around the world. They estimated the growth of hundreds of reefs and combined physiological responses to climate change with modelling to see how reef growth might change.

“The results of this work indicate that the fate of each coral reef is related directly to our carbon dioxide emissions. Only by limiting our emissions can we halt the erosion of these reefs.”

That was the second time the $500,000 award had come to the University, with the 2010 prize won by the late Sir Paul Callaghan and magnetic resonance researchers for work which has since been successfully commercialised by University spin-off company Magritek.

The success of Te Herenga Waka researchers in the awards reflects the longstanding strength of science at the University, says Professor Ehsan Mesbahi, Pro-Vice-Chancellor of Science, Engineering, Health, Architecture and Design Innovation.

“Dr Cornwall is the latest in an illustrious line of PM science prize winners from the University conducting nationally and in many cases world-leading research rightly acknowledged for its contribution to important areas of knowledge and understanding.”