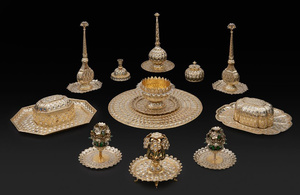 Clive of India’s Durbar set at risk of export

Culture Minister Caroline Dinenage has placed a temporary export bar on the Durbar set, which includes rose water sprinklers and stands, and is valued at £730,000. It is hoped that this will offer a UK gallery or institution an opportunity to acquire the set for public display.

Although a controversial figure, Major-General Robert Clive, 1st Baron Clive, known as ‘Clive of India’ was the first British Governor of the Bengal Presidency and is credited – along with Warren Hastings – with laying the foundations of the British Empire in India.

The items at risk of export offer a rare glimpse into the manners and customs of courtly life in 18th century India. The pieces in this set were listed in an inventory of Clive’s possessions made in 1766.

It is likely that the set would have been used at court. Contemporary paintings depict regional rulers reclining on a bolster surrounded by members of their court with an array of rosewater sprinklers, caskets and perfume containers, all of which are represented in this set.

Each piece has surface decoration of tear-drop motifs carefully accentuated by mercury gilding. They all had a function in the elaborate rituals of a formal darbar, or court assembly. Those attending the darbar would be sprinkled with rose water from one of the slender-necked vessels, or given an attar of roses from one of the perfume holders. The two lidded boxes, or pāndāns, each of different form, contained pān. This refers to small pouches made of edible leaves wrapped round aromatic spices and chopped betel nuts. Pān was chewed as a mild stimulant, but in a darbar would be offered on salvers to indicate that the audience had come to an end.

The set adds another dimension to our understanding of Clive of India’s career which has been seen almost exclusively from a Western perspective as it demonstrates that he adopted formal Indian customs.

These beautiful items showcase the luxury of the Indian court and offer us a glimpse into the inner workings of how the British interacted with traditional Indian ceremonies.

I hope that an institution is able to save this collection for the public to help us better understand our nation’s long friendship with India.

The Minister’s decision follows the advice of the Reviewing Committee on the Export of Works of Art and Objects of Cultural Interest (RCEWA). The committee noted that the set was a striking assemblage of objects, with an extraordinary range of component parts.

A variety of silver vessels, used in formal receptions or Durbars, provided the essential aesthetic and courtly backdrop for doing business in Moghul India. This is the most complete and splendid known set. Assembled by Robert Clive while he was working for the East India Company, it demonstrates how the British adopted Indian customs in pursuit of their commercial and political goals. It also enables people today to evaluate accusations of greed thrown at Clive by his British contemporaries.

More research needs to be done on how and from where Clive assembled the set, which is very important also because, uniquely, it has an unbroken provenance going back to the later eighteenth century.

Every effort should be made to retain this Durbar set in the United Kingdom so that it can be viewed, researched, and its ambiguous meanings drawn out by future generations.

The committee felt that the set was of significance to the study of the history of the British in India through its association with the undeniably controversial figure of Robert Clive, whose collection of Indian art is remarkably well documented.

The RCEWA made its recommendation on the grounds of the Durbar set’s outstanding significance for the study of silver and the culture of court etiquette, and diplomatic gift-giving between Britain and India within the broader Mughal context.

The decision on the export licence application for the Durbar set will be deferred until 14 April 2021. This may be extended until 14 September 2021 if a serious intention to raise funds to purchase it is made at the recommended price of £730,000.