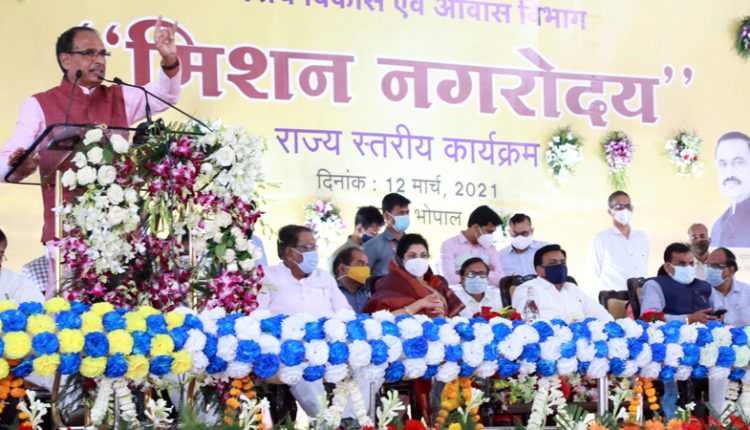 Bhopal: Chief Minister Shri Shivraj Singh Chouhan has said that the provision of food, clothing and shelter, education, medicine and employment is the vision of urban development. Chief Minister Shri Chouhan was addressing the state level programme of Mission Nagarodaya. He distributed benefits under various beneficiary oriented schemes costing Rs. 3,112 crore 81 lakh and performed bhoomi-poojan and dedication of urban infrastructure. This programme was held in all 407 urban bodies of the state.

Chief Minister Shri Chouhan announced the launching of Mukhyamantri Udyam Kranti Yojana to provide self-employment to all in the programme. Chief Minister Shri Chouhan said that Rs 70 thousand crore will be spent for the development of cities in the next five years. Development and public welfare works will continue. Road, electricity, water, underground sewage and tap water will be provided in every house.

Three new programmes on infrastructure, drinking water purification and sanitation started
Chief Minister Shri Chouhan started the distribution of first and second installment amounting to about Rs 1602 crore to more than one lakh 60 thousand families under the Pradhan Mantri Awas Yojana under Mission Nagarodaya. Rs 100 crore was distributed to one lakh beneficiaries of 407 urban bodies and 5 cantonment areas under Pradhan Mantri Swanidhi Yojana. In the programme, Chief Minister Shri Chouhan provided an amount of about Rs 810 crore to the urban bodies for development works under the 15th Finance Commission.

Special programmes will be held at birthplaces and workplaces of martyrs
Chief Minister Shri Chouhan said that on completion of 75 years of independence, activities under Amrit Mahotsav have started. Paying obeisance to the freedom fighters he said that programmes would be held in all the districts of the state in their memory. Expressing his gratitude to the Prime Minister Shri Narendra Modi, Chief Minister Shri Chouhan said that the vision and ability to turn disaster into an opportunity in the difficult times of Corona was possible only by the efforts of Prime Minister Shri Modi.

Every poor will get a house or a flat in the next four years
Chief Minister Shri Chouhan said that in the next four years, all poor in Madhya Pradesh will have his own house or flat. Better transportation arrangements will be made to facilitate city bus service, e-rickshaws and parking. Arrangements are being made to increase the number of parks, libraries, Deendayal kitchen centers, special facilities to senior citizens and differently-abled, shelter homes for destitute, CM Rise Schools for quality education and Sanjeevani Mohalla clinics for medical facilities.

Illegal colonies will be legalized
Chief Minister Shri Chouhan said that every city will have its own master plan and disaster management plan. Rejuvenation of religious places and conservation of heritage is also going on. Chief Minister Shri Chouhan announced the legalization of illegal colonies. He said that no illegal colony will be allowed to develop in future. Government officials will be responsible for this.

Poor should not be affected while removing encroachments
Chief Minister Shri Chouhan said that the rule of law will prevail on the land of Madhya Pradesh. No mafia will be allowed to dictate terms. Land mafia, law breakers will not be spared. The state government is committed to protect women. So far 72 people who have committed atrocities on women have been sentenced to death. Various activities are going on to make life smooth. Arrangements are being made to provide income certificates, copies of Khasra-Khatauni, bill payments and various permissions online so that citizens to not have to visit offices for normal activities. Campaign is also on to free the cities from encroachment. The officers have been given clear instructions that the poor person should not be affected in the anti- encroachment campaigns. MP Shri Vishnu Dutt Sharma said that the crisis in Madhya Pradesh has been transformed into opportunity. In the past, griha pravesh of 75 thousand homeless persons was performed by the Chief Minister Shri Chouhan. It is now possible to deposit amount without middlemen in the accounts of the poor. Prime Minister Shri Modi and Chief Minister Shri Chouhan have given transparent governance in Madhya Pradesh.

MoU signed between Police Headquarters and Institute of Good Governance

Harper Adams University: Expertise of Engineering lecturer drawn upon to…

iednewsdesk Jan 18, 2022
The expertise of a Harper Adams University lecturer has been drawn upon to help re-imagine classic paintings for…