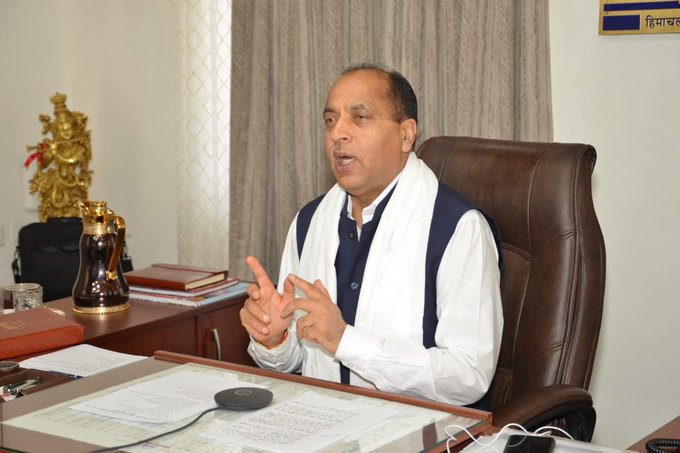 The State Government has notified disbursal of subsidy under the Mukhya Mantri Swavlamban Yojna through Nodal Banks instead of Treasury and 60 percent of the subsidy to be front loaded to facilitate the beneficiaries of this Yojna. This was stated by the Chief Minister Jai Ram Thakur while interacting with the beneficiaries of ‘Startup Scheme’ and ‘Mukhya Mantri Swavlamban Yojna’ through video conferencing from Shimla today.

Jai Ram Thakur said that in addition to this the interest subsidy provided to beneficiaries would be released after six months instead of one year. He said that government has also decided to include new activities such as e- rickshaw, solar powered three wheeler, small goods carrier, mobile food van etc. under the scheme. He said that timelines have also been fixed for every work to facilitate the beneficiaries. He said that the banks would have to sanction the loan within one month whereas General Manager, District Industries Centres would disburse balance subsidy within 15 days under commercial production.

Chief Minister said that this Scheme was started in May, 2018 with an objective to provide financial assistance to the youth to start their self employment ventures. He said that about 1415 youths showed interest in this scheme last year and during the last few months as many as 536 youths have derived benefits of this scheme. He said that State Government has set a target of covering 2000 youths during the current financial under this scheme.

Jai Ram Thakur said that on the suggestions from the youth as well as beneficiaries, the State Government has carried out several amendments in the Scheme to make it more attractive. He expressed hope that in the coming time, the scheme would prove boon to the youth of the State. Had there been such scheme during his youth day, he would not have been in politics but derived benefits of the scheme and started his self employment venture, Chief Minister added in a lighter vein.

Chief Minister said that investment subsidy @ 25 percent for men, 30 percent for women and 35 percent for widows upto a maximum ceiling of Rs. 40 lakh in plant machinery was being provided under this scheme. He said that the banks would sanction 90 percent of the project cost whereas 10 percent margin money would be shared by the beneficiaries.

Industries Minister Bikram Singh Thakur said that the ‘Mukhya Mantri Swavlamban Yojana’ has proved a boon to the youth of the State for making the youth a job provider instead of job seekers. He said that State Government has taken necessary amendments in the scheme to make it more convenient and easy for the youth to derive maximum benefits of the scheme. He also thanked the Chief Minister for envisaging interest in making this scheme more popular amongst the youth.

Additional Chief Secretary Industries Ram Subhag Singh while welcoming the Chief Minister said that about few months ago, as many as 536 youth have been benefitted by providing loans to the tune of Rs 111.35 crore and subsidy involving Rs 27.16 crore. He assured the Chief Minister that all out efforts would be made to achieve the targets set for the current financial year.

Director Industries Hansraj Sharma conducted the proceedings of the meeting and detailed various salient features of the scheme.

Meena Devi from Bilaspur district, Manish Jamwal from Chamba, Shaurya Rajput from Hamirpur district, Ashish from Kangra district, Asmita from Kullu district, Deshraj from Mandi district, Vijay Sharma from Shimla district, Ashutosh from Solan district and several other beneficiaries of the Yojna shared their views with the Chief Minister on the occasion through video conferencing.