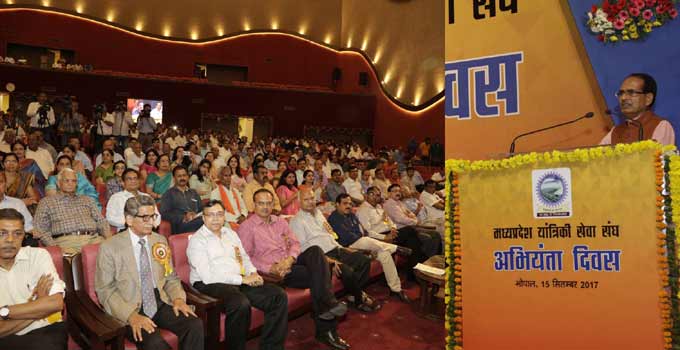 Bhopal: Chief Minister Shri Shivraj Singh Chouhan said that the responsibility of Nav Nirman of India and Madhya Pradesh lies with the engineers. He called upon the engineers to resolve to build a new Madhya Pradesh for building a new India. He was addressing the Engineers Day programme organized by the Madhya Pradesh Yantriki Seva Sangh at the Vidhan Sabha auditorium today.

Paying tributes to India’s great engineer Late Dr. Mokshagundam Vishvesaraya, Shri Chouhan termed him the builder of modern India. He said that Madhya Pradesh has moved fast in infrastructure building in the last one decade. The credit of this goes to the hard work, knowledge and skill of the engineers. He said that the new achievements have been made in the sectors of power, roads and water due to the hard work and resourcefulness of engineers. Works like linking Kshipra, Narmada and providing drinking water in cities and villages have been successful due to the 24×7 hard work of engineers. The engineering community can make even the impossible work possible.

The Chief Minister honoured retired engineers of Public Works, Water Resources and Public Health Engineering departments for spending their lives in the building of Madhya Pradesh. He released the book “Swapnadarshi”.