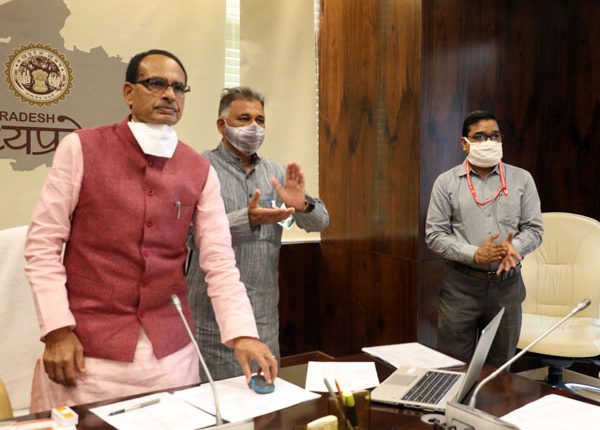 Bhopal : Chief Minister Shri Shivraj Singh Chouhan has said that we should seek poor’s blessings by providing tasty and nutritious food to the poor. Urban bodies and voluntary organizations engaged in this work certainly deserve to be lauded. One can find Narayana by feeding food to the hungry and water to the thirsty. Chief Minister Shri Chouhan was virtually dedicating 100-new and well equipped kitchen centers in the state under Deendayal Antyodaya Rasoi Yojana at Minto Hall today.

Deendayal Antyodaya Yojana: At a glance

Under the scheme, 56 kitchen centers were started in 51 district headquarters since the year 2017. At that time, arrangements were made to provide thalis for Rs. 5. At present, urban bodies and voluntary organizations have made arrangements to implement the scheme for 310 days of the year. Under this, roti, sabji, dal, rice will be supplied in the thali from 10 am to 3 pm for Rs 10 from Monday to Saturday. Seasonal green vegetable will also be served in the thali. In the first phase of the scheme more than 1 crore 42 lakh thalis have been served to the poor. The state government has sanctioned an amount of Rs 28 crore for setting up and operating new kitchen centers. These centers have been started in cities around bus stands, railway stations and district hospitals. The facility of searching these centers with the help of Google Map has also been started.

Chief Minister Shri Chouhan said that food, clothing, shelter, education and medicine are basic needs. It is also said that Bhookhe bhajan na hoi Gopala. Anna hi Brahma hai. Kitchen centers are useful for the labourers and others who come to cities leaving behind their villages to fend for themselves and their children. The Chief Minister said that the scheme that started from the year 2017 should be extended. He said that apart from the district headquarters of the state, major religious tours have been added to the town plan. Apart from this, kitchen centers started in other towns and cities should also be expanded. This will be an important step for humanity.

Chief Minister Shri Chouhan said that the Madhya Pradesh government had made food arrangements for migrant labourers passing through Madhya Pradesh from one place to another even during the Corona period. The government has launched Sambal and many other schemes, which provide food grain, treatment and financial support in the condition of an accident to the poor. Two crore Ayushman cards have been distributed for the treatment of the poor in the state. In this, treatment facility of up to Rs 5 lakh is available to the person in identified hospitals. All the poor will get a Pakka Makan in the next three years. About 3 lakh street vendors of the state have been provided interest-free loan at the rate of Rs. 10 thousand per beneficiary to develop their small business.

Chief Minister Shri Chouhan said that one gets blessings by providing food and assistance to the poor. This work should be done in all ways at the government, social institution and individual level.

Government has declared 23rd January as Parakram Diwas to…

Minister of Minerals Shri Brijendra Pratap Singh and Chairman of Mineral Corporation Shri Pradeep Jaiswal provided an amount of Rs. 10 lakh in the presence of Chief Minister Shri Chouhan, on behalf of the Corporation for implementation of Deendayal Antyodaya Rasoi Yojana under CSR. Along with this, Minister of Science and Technology, Shri Om Prakash Sakhalecha, handed over a cheque of Rs. 10 lakh on behalf of Madhya Pradesh Electronic Development Corporation, to the Urban Development and Housing Minister Shri Bhupendra Singh and Minister of State Shri O.P.S. Bhadauria.

Urban Development and Housing Minister Shri Bhupendra Singh said that Chief Minister Shri Chouhan is always ready to serve the poor. It is the outcome of his thinking that schemes like Sambal, Deendayal Rasoi and Street Vendor Scheme are being implemented for the welfare of the poor in Madhya Pradesh. Shri Singh said that the Chief Minister has made attempts to ensure maximum possible assistance to the poor. He said that food will be available for just Rs 10 to not only to the labourers coming from villages to the city but to the poor at the kitchen centres.

Minister of State for Urban Development and Housing Shri OPS Bhadoria said that the arrangement of lodging and food for the poor coming from the villages to the city has been made possible through the efforts of Chief Minister Shri Shivraj Singh Chouhan through Rain Basera and Deendayal Rasoi Yojana. He said that in the coming three years, the state will lay a new foundation for progress and development.

Tourism Minister Sushri Usha Thakur, MLA Smt. Krishna Gaur, along with several public representatives, Principal Secretary Urban Development and Housing Shri Manish Singh and officials related to the implementation of the scheme and beneficiaries of the scheme from Bhopal were present in the programme.