“University Professors are distinguished by international recognition and for their contributions to education, artistic creativity and/or research,” said Provost Jim Garrett. “Each University Professor exemplifies a high level of professional achievement and an exceptional commitment to academic excellence at our university.”

Garrett said the professors were nominated and recommended by academic leaders and faculty who have achieved the designation of University Professor. 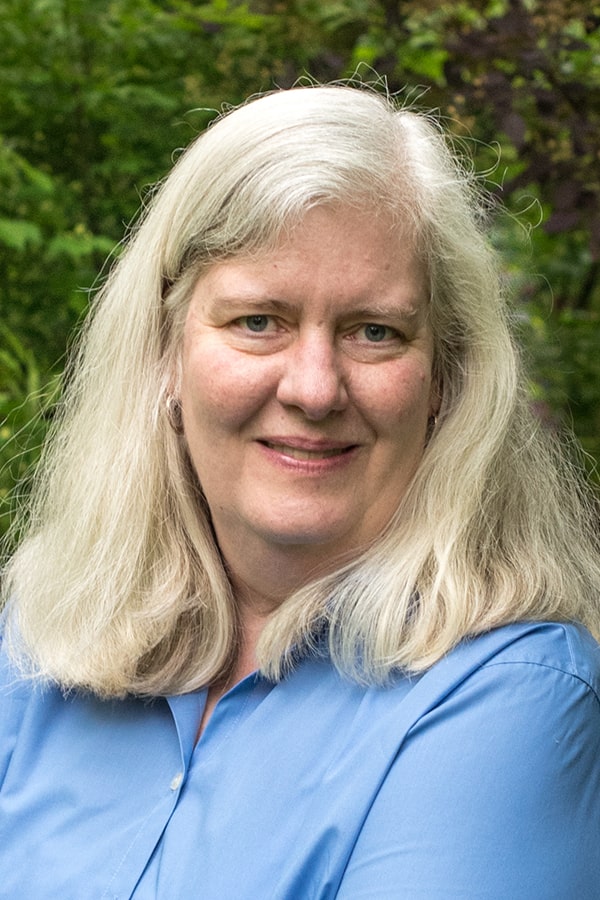 Jessica Hodgins is a professor of computer science and robotics in the School of Computer Science and also directs the Facebook Artificial Intelligence Research laboratory in Pittsburgh. Her research focuses on computer graphics, animation and robotics with an emphasis on generating and analyzing human motion. She is the former vice president for research at Disney Research.

She received her Ph.D. in computer science at CMU in 1989 and served as an associate professor and assistant dean in the College of Computing at Georgia Institute of Technology before joining the CMU faculty in 2000. She served as associate director of faculty in the Robotics Institute from 2005-2015.

Hodgins is president of the Association for Computing Machinery’s (ACM) Special Interest Group on Computer Graphics and Interactive Techniques (SIGGRAPH). She was awarded the SIGGRAPH Computer Graphics Achievement Award in 2010. She received SIGGRAPH’s highest honor, the Steven Anson Coons Award for Outstanding Creative Contributions to Computer Graphics in 2017 in recognition of her foundational work in character animation, her support and cultivation of emerging researchers, and her extensive volunteer service to the computer graphics community. She also is an ACM Fellow. 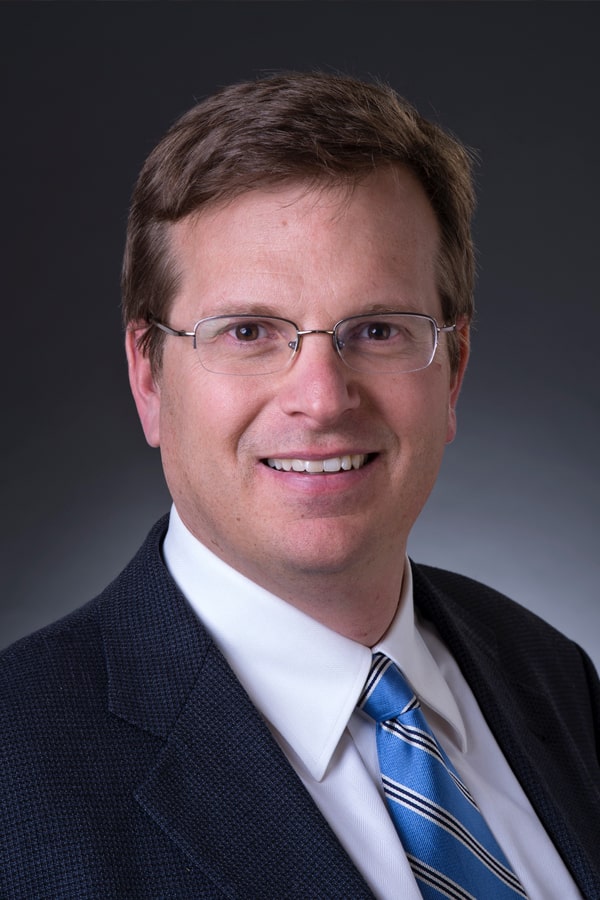 Allen L. Robinson is the David and Susan Coulter Head and the Raymond J. Lane Professor of the Department of Mechanical Engineering, and Professor within the Department of Engineering and Public Policy. He is the director of the EPA-funded Center for Air, Climate, and Energy Solutions (CACES) and a founding member of the Center for Atmospheric Particle Studies (CAPS).

Robinson’s teaching and research examines technical and policy issues related to the impact of emissions from energy systems on air quality and climate. He is developing hyper-local air pollution exposure maps and quantifying the environmental impacts of shale gas development.

Robinson received his Ph.D. from the University of California at Berkeley in Mechanical Engineering in 1996 and his B.S. in Civil Engineering from Stanford. He has received numerous awards, most recently the American Geophysical Union 2015 ASCENT award. 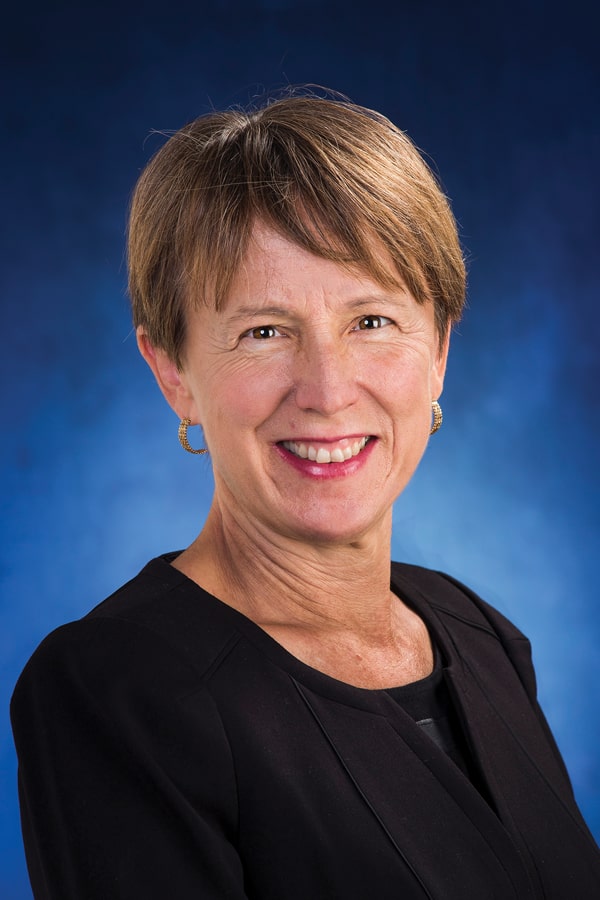 Kathryn Roeder, the UPMC Professor of Statistics and Life Sciences, holds appointments in the Department of Statistics & Data Science and the Computational Biology Department. She also served as the university’s vice provost for faculty from July 2015 through June 2019.

Roeder started her research career in biology but was soon drawn to statistics. Her first major data project was in DNA forensics, helping to solidify the credibility of this form of evidence in the judicial system. As her scientific career advanced, Roeder transitioned to developing statistical and machine learning tools for finding associations or patterns in data. She focuses on high-dimensional inference problems with applications such as analyzing variation in the whole human genome and how it relates to disease. Her work has contributed to a better understanding of schizophrenia, autism and other genetic disorders.

Roeder has published more than 150 scholarly articles. She has been elected to the National Academy of Science and has been elected a fellow of the American Association for the Advancement of Science (AAAS), the American Statistical Association and the Institute of Mathematical Statistics. She received the Snedecor Award for outstanding work in statistical applications and the Janet L. Norwood Award for outstanding achievement by a woman in statistical sciences. The Committee of Presidents of Statistical Societies bestowed its Presidents’ Award for the outstanding statistician under age 40 upon her, and she is the organization’s 2020 Fisher Lectureship Award recipient.

Roeder previously served as the statistics section chair for AAAS and has played an integral role in organizing conference sections aimed at helping her community improve how statistics are communicated across scientific disciplines, as well as to the public. 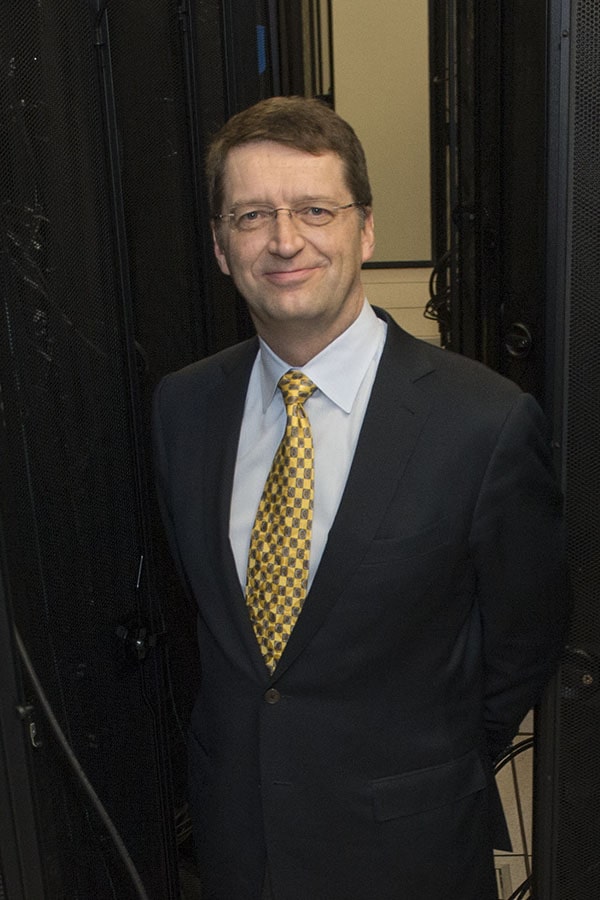 Tuomas Sandholm is the Angel Jordan Professor of Computer Science and a serial entrepreneur. His research focuses on the convergence of artificial intelligence, economics and operations research. He is the founder and director of the Electronic Marketplaces Laboratory. He has published over 500 papers and holds 22 patents. He has been a faculty member at CMU since 2001.

Since 2010, his algorithms have been running the national kidney exchange for the United Network for Organ Sharing, where they autonomously make the kidney exchange transplant plan for 73% of all U.S. transplant centers together each week. He also co-invented never-ending altruist-donor-initiated chains and his algorithms created the first such chain. Such chains have become the main modality of kidney exchange worldwide and have led to over 10,000 life-saving transplants. Then he invented multi-organ exchanges, and the first liver-kidney swap took place in 2019.

Sandholm has developed the leading algorithms for several general classes of game with his students. Last year, their AI “Pluribus” became the first and only AI to beat professional poker players at multi-player no-limit Texas hold’em, the first superhuman AI milestone in any game with more than two players. No-limit Texas hold’em is the main benchmark for testing algorithms that solve imperfect-information games.

He is the recipient of numerous awards, including the prestigious Marvin Minsky Medal for his work on computer poker, Computers and Thought Award, inaugural ACM Autonomous Agents Research Award, Allen Newell Award for Research Excellence, Sloan Fellowship, Carnegie Science Center Award for Excellence, Edelman Laureateship, and NSF Career Award. He is Fellow of the ACM, AAAI, and INFORMS. He holds an honorary doctorate from the University of Zurich. 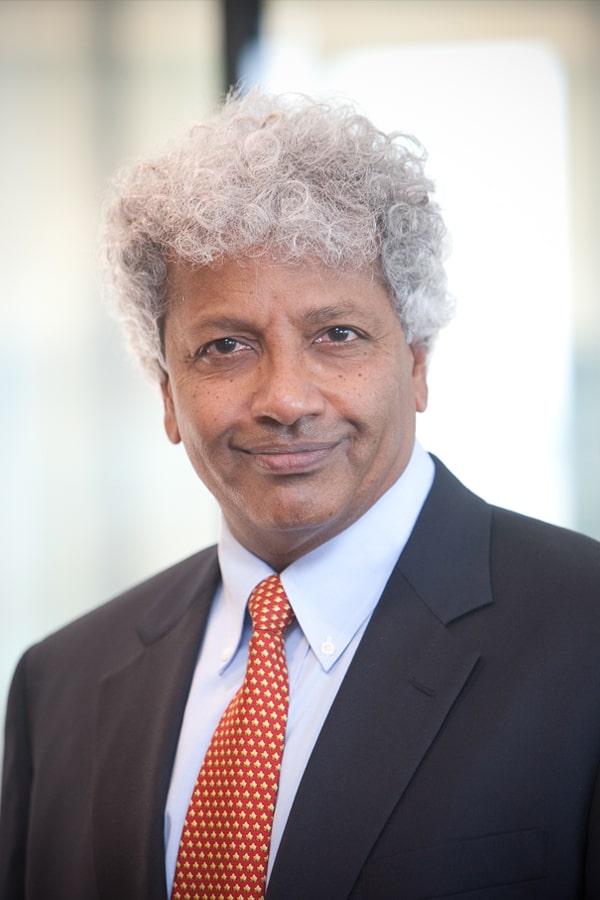 Mahadev Satyanarayanan, best known as Satya, is the Carnegie Group Professor of Computer Science. He is an experimental computer scientist, who designs, implements and evaluates systems. Satya’s multi-decade research career has focused on the challenges of performance, scalability, availability and trust in information systems that reach from the cloud to the mobile edge of the Internet.

In the course of this work, he has pioneered many advances in distributed systems, mobile computing, pervasive computing, and the Internet of Things (IoT). Examples include his work as principal architect of CMU’s pioneering Andrew File System in the 1980s, his work on disconnected and weakly connected mobile data access in the Coda File System in the early 1990s, his work on adaptive and energy-efficient mobile computing in the Odyssey system in the late 1990s and early 2000s and his most recent work in establishing the field of edge computing.

Satya directs the Living Edge Laboratory, which explores edge computing in live settings. By introducing a new computing tier between the cloud and mobile/IoT devices, edge computing makes powerful computational resources available via low latency and high bandwidth wireless networks. Another project, called Gabriel, leverages edge computing to amplify human cognition in real time for complex task guidance. Low latency wireless access to resources that are larger, heavier and more energy hungry than could ever be carried or worn by a human user is crucial to realizing this vision. 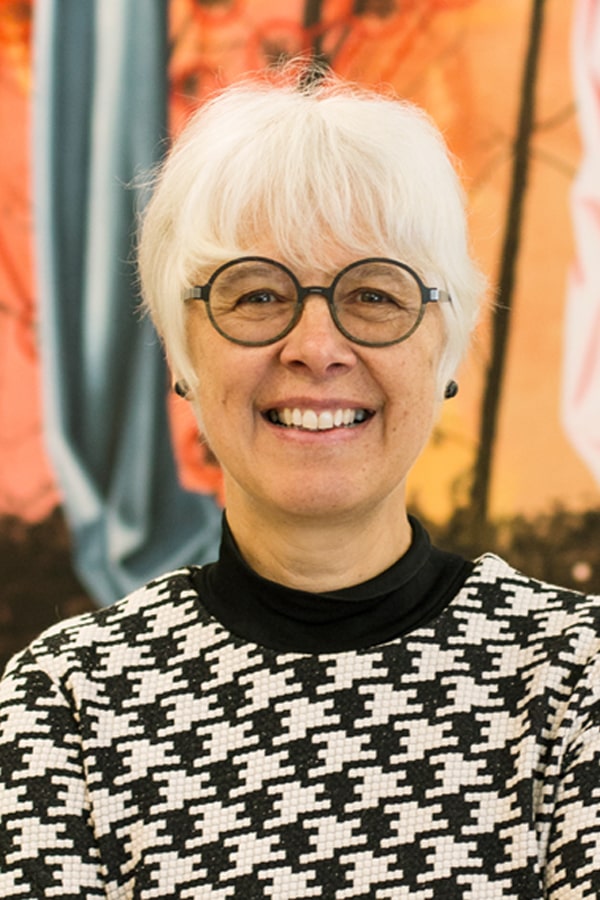 Susanne Slavick is an artist, curator and the Andrew W. Mellon Professor of Art. Her curatorial projects include “When the Bough Breaks” (2019), “Marx@200” (2018) commemorating the legacy of Marx’s critique of capitalism; “Unloaded” (2015), a traveling group show exploring the impact of guns in our culture; and “Out of Rubble” (Charta, 2011), a book and traveling exhibit featuring international artists who respond to the aftermath of war.

Slavick’s work pursues empathic unsettlement through images that remind us of what we stand to lose after what we have lost already. She has exhibited internationally; “Getting There,” an exhibit with her partner and colleague Andrew Ellis Johnson, opens in 2021 at the Godwin-Ternbach Museum at Queens College.

Her work has been recognized by the National Endowment for the Arts and through four awards from the Pennsylvania Council on the Arts. In 2019, she was awarded the College Art Association Distinguished Teaching of Art Award and the College of Fine Arts Henry Hornbostel Teaching Award. Her essays and articles have appeared in: “Journal of Visual Culture” (SAGE 2018); “Technology and Culture” (Johns Hopkins University Press 2018); “Formations of Identity: Society, Politics, and Landscape,” eds. Floyd Martin and Eileen Yanoviak (Cambridge Scholars Publishing, 2016); “American Rubble” (Haverford College, 2016); “Cairo: Images of Transition” (transcript Verlag, 2013); “Hyperallergic, Cultural Heritage and Arts Review;” “Cultural Politics” (Duke University Press); “Frontiers: A Journal of Women’s Studies; Guernica: A Magazine of Art & Politics” and more. 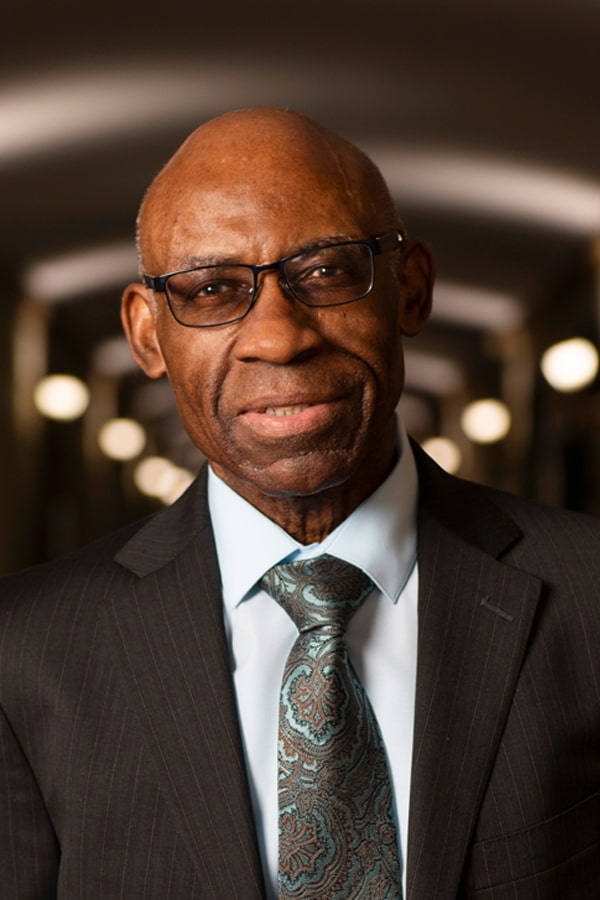 Joe William Trotter, Jr., the Giant Eagle Professor of History and Social Justice and past History Department chair, founded and directs CMU’s Center for Africanamerican Urban Studies and the Economy (CAUSE).

An elected member of the American Academy of Arts and Sciences, he is a pioneer in the development of U.S. urban, labor and working-class history. His scholarship includes a wide range of scholarly books, essays and articles in professional journals and edited collections. His most recent book, “Workers on Arrival: Black Labor in the Making of America,” selected a CHOICE Outstanding Academic Book for 2019, chronicles African American urban life since the Atlantic slave trade. He recently completed another book, “Pittsburgh and the Urban League Movement: A Century of Social Service and Activism.” He has served on the boards and committees of professional organizations, including the National Endowment for the Humanities. He is past president of the Labor and Working Class History Association and president-elect of the Urban History Association. He also is a member and past vice president of the board of trustees of the H. John Heinz III Regional History Center, a Smithsonian affiliate.

The new University Professors will be recognized at a future event.