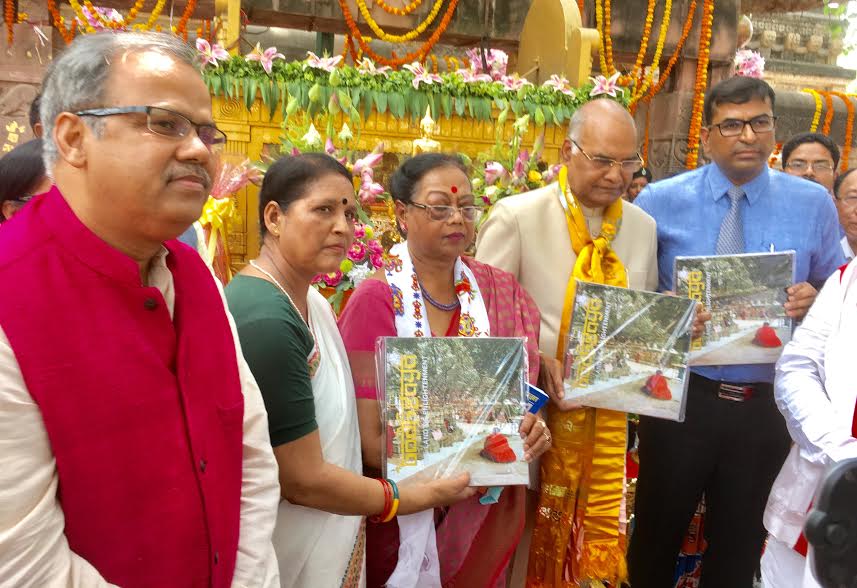 The Coffee Table Book, ‘Bodhgaya: The Land of Enlightenment’ launched

Gaya: The Coffee Table Book, ‘Bodhgaya: The Land of Enlightenment’ was launched in the Mahabodhi Temple premises at Bodhgaya by the Governor of Bihar, Sh Ram Nath Kovind this morning during celebrations of 2561 Buddha Jayanti.

Speaking on the occasion, His Excellency Sh Kovind reiterated the divine coincidence how the “Buddha Jayanti marks the Buddha’s birth, enlightenment and death. The Buddha offered an ethical code of conduct to all of us. I hope the book will rekindle the lights in our hearts by recounting all of this.”

The author and photo editor of the Coffee Table Book, Uday Sahay pointed out how the “book may lead to a major religious destination branding exercise and help position Bodhgaya as a ‘Land of Enlightenment with the aid of high quality images of the Temple, land, and the Buddha’s life story.”

Chairman BTMC, Kumar Ravi welcomed the guest and outlined the significance of the event and Secretary BTMC, N Dorjee offered the vote of thanks. Divisional Commissioner Gaya, Liam Kings also spoke on the occasion, and the master ceremony role was performed by Kiran Lama. A large number of seniormost Buddhist leaders from different countries and parts of India formed the august gathering. The event was also marked by recitation of sacred Suttas by Theravadin and Mahayana monks.

The book is likely to be on Amazon platform by this month end and it will be distributed in 24 countries directly.