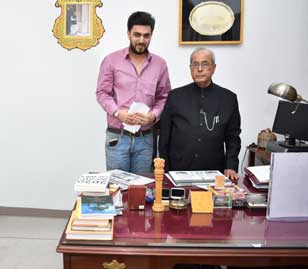 New Delhi: Bharat Ratna Dr. Pranab Mukherjee & Former President of India was presented with the first copy of a Coffee Table Book Titled Jainism – A Spiritual Journey by well known photographer Varun Joshi. He travelled to all ancient Jain temples, took inspiration from the Jain culture and presented their beliefs through his pictures in the book. The impressive pictorial representation of the sect takes readers into the rich heritage of Jain temples and brings other historical details to the fore. It took 11 months to complete this spectacular journey of Jain Temples. There are more than 300 impressive arrays of photographs depicting Jain’s ancient texts and learning. This beautiful book on Jainism depicting the history of the religion is sponsored by Coal Energy Minerals Pte Ltd. and co-sponsored by Mr. Bijay Mandhani of Gl Mandhani Trust. Mr. Mandhani has always promoted and supported the growth of art and culture.

The 90 page coffee table book has been shot in some of the famous Jain temples across India It features Jain temples such as Ranakpur Jain Temple located in Pali district, Rajasthan is flamboyantly embellished and strikingly intricate and is one of the largest in India. One of the features that sets this temple apart from all others is the 1444 marble pillars. Palitana also known as Shartrunjaya birth Bhavnagar, Gujarat is considered one of the holiest among jains there is a cluster of 863 temples atop mountain Shatrunjaya. Sammed Shikharji is considered one of the most notable Jain pilgrimages since 20 out of 24 tirthankars attained moksha at this place. Dilwara Jain temple is considered by far the most beautiful of all the Jain temples and rightly so entirely carved in white marble. This temple is a tribute to ornamentation and opulence.

Dadabari Jain temple, Mehrauli, Delhi is set in the heart of buzzing metropolis the pristine white shrine called Dadabari is a panacea to souls seeking solace and this shrine is dedicated to the Manidhari Dada Shri Jinchandra Suri who was a famous saint. Sharavanabelagola – Hassan district Karnataka -Sharavanabelagola is known for the mammoth 57 feet tall statue of Gommateshvara also identified as Bahubali who was the son of 1st Tirthankar Lord Adinath.

Dr. Pranab Mukherjee was impressed with Varun Joshi’s work and complimented the photographer on creating this amazing masterpiece, which is a ‘Souvenir On Jainism’. He had earlier released a coffee table book titled – “President Pranab Mukherjee – A Statesman, which was released by PM Modi at Rashtrapati Bhavan. The book was photographed and curated by Varun Joshi.

Giving his insight upon how difficult and challenging it was to click the cover shot, Varun said, “While shooting in the peak winter season, we arrived late at night to Bara Padampura, Sheodaspura near Jaipur. The head authority of the temple told me that the abhishek would start at 5:00 am. I was prepared to capture the beauty of the temple early morning but to our disappointment, the dense fog reduced the visibility to zero. Suddenly, I saw three ‘sadhvis’ walking through the corridors of the temple and shot them from behind as they disappeared into the foggy atmosphere. A journey like this is a one-time opportunity for any human being,” he said.