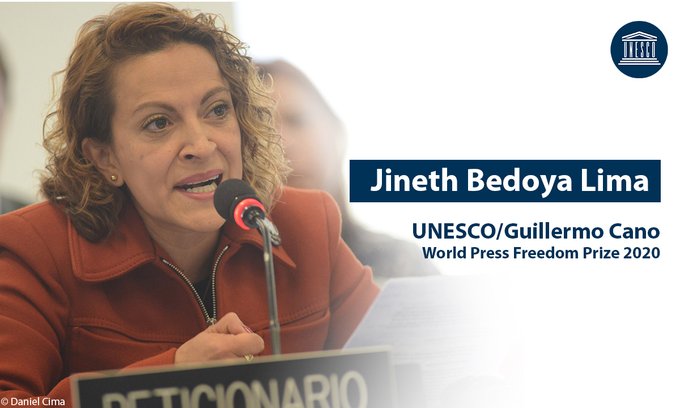 New Delhi: Colombian investigative journalist Jineth Bedoya Lima has been named as the laureate of the 2020 UNESCO/Guillermo Cano World Press Freedom Prize on the recommendation of an independent international jury of media professionals.

Born in 1974, Jineth Bedoya Lima’s reporting has focused on the armed conflict and peace process in Colombia and on sexual violence against women. Ms Bedoya Lima was herself a victim of sexual violence in 2000 when she was abducted and raped in connection with an investigation into arms trafficking she was conducting for daily newspaper El Espectador. Three years later, while working for the daily El Tiempo, she was kidnapped by militants of the former Revolutionary Armed Forces of Colombia (FARC).

“The courage and commitment of Jineth Bedoya Lima, doubly exposed to unacceptable risks as a woman and as a journalist, inspire profound respect,” said UNESCO Director-General Audrey Azoulay. “We need the work of professional and independent journalists.”

“The present pandemic highlights the vital role journalists play in providing all of us with access to reliable, in some cases vital, information in crises situations,” Ms. Azoulay added. “It also shows the many risks journalists face everywhere in the world in the exercise of their profession.”

“In attributing the Press Freedom Prize to Jineth Bedoya Lima, the Jury recognizes and supports her outstanding courage and untiring commitment to uncovering issues of fundamental importance to society,” declared Giselle Khoury, President of the Jury. “The Jury wished to join in Bedoya Lima’s forceful denunciation of increasing violence against women journalists in Latin America and many other parts of the world and her efforts to reverse this alarming global trend.”

The UNESCO/Guillermo Cano World Press Freedom Prize is awarded annually on the occasion of World Press Freedom Day, celebrated on 3 May. This year’s Prize-giving ceremony and main conference on freedom of the press which were scheduled to take place in The Hague in cooperation with the Government of the Netherlands will be postponed due to the Covid-19 crisis.

Nevertheless, a series of activities and events will be held online focusing on the importance of press freedom and the work of independent journalists to ensure access to information during the pandemic.

The $25,000 Prize recognizes a person, organization or institution that has made an outstanding contribution to the defence or promotion of press freedom, especially in the face of danger. It is funded by the Guillermo Cano Isaza Foundation (Colombia), the Helsingin Sanomat Foundation (Finland) and the Namibia Media Trust and is awarded annually after the deliberations of an independent jury of renowned journalists from all regions.

UNESCO handbook on “Journalism, Fake News & Disinformation” to be translated into 30 new languages