The U.S. African American Redress Network, a collaboration between Howard University’s Thurgood Marshall Civil Rights Center and Columbia University’s Institute for the Study of Human Rights, was created as an urgent response to the discourse on reparations and social justice in the U.S.

As police violence and structural racism continue to pose a grave threat to American society as seen in both the death of George Floyd and the coronavirus pandemic, which has disproportionately affected people of color, the Redress Network aims to better understand how communities are addressing historic racial transgressions. It also expects to increase awareness of redress efforts across different regions and fields such as activism, academia and policy-making.

“Though reparation is not a new topic, the time is now to pursue racial justice by combining advocacy and scholarship in support of social justice movements,” said Elazar Barkan, director of the Institute for the Study of Human Rights. A movement toward historical justice has been widely embraced as a critical element to advancing reconciliation, and is a precondition to understanding the widely diverse experiences of different groups and races in the country.

“For this reason, at this crucial time, the Thurgood Marshall Civil Rights Center has been eager to enter into a partnership with Columbia University in the hopes that the movement for reparations—the most important route to true racial healing—continues to develop on the level where its success is most important and likely; on the local level,” said Justin Hansford, the center’s director and a professor of law at Howard. Employing scholarship, legal advocacy and community organizing has been at the heart of the Marshall Center, Howard’s flagship institutional setting for the study and practice of civil rights, human rights and racial justice law and advocacy.

In an initial pilot period, the project focused on the South Atlantic region along the Atlantic Coast, from Delaware to Florida. Using rigorous vetting and assessment practices, the researchers spent six months documenting more than 100 local efforts to address historical wrongdoings within this region. Preliminary findings demonstrated that explicit local reparations were evident throughout the U.S. except for the far Northwest, such as Montana and Washington.

A carousel is a rotating set of images. Use the previous and next buttons to change the displayed slide 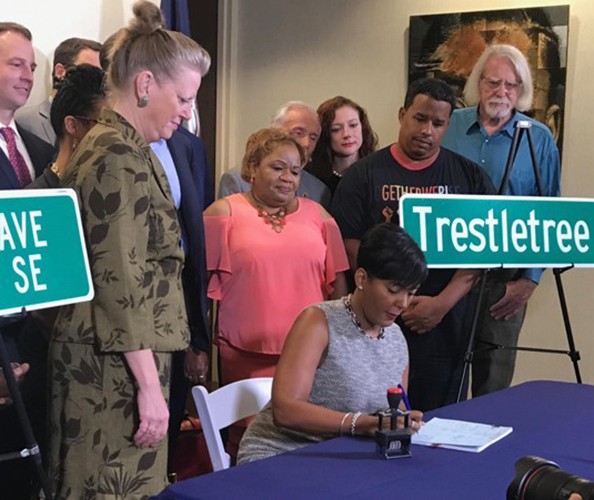 Categories of redress are framed within the U.N. international covenant on civil and political rights (2004), which offered guidance on reparations. This covenant expounded that states are obligated to assure basic human rights and further maintained that when states fail to do so, there is a legal obligation to make reparations.

As demonstrated by the data, reparations in these regions provided restitution, rehabilitation, public apologies, public memorials, guarantees of non-repetition and occasionally involved changing relevant laws and practices as well as bringing to justice the perpetrators of human rights violations. The bulk of the current map reflects remedies that fall under satisfaction, namely apologies, truth-seeking initiatives through historical research and preservation, and commemorations and monuments that shift historical narrative to acknowledge lynching, Juneteenth, black life during segregation, and contributions of notable black Americans previously erased by dominant narratives. The removal of monuments to the Confederacy also falls under satisfaction. Compensation in the current entries has occurred in local instances most frequently through scholarship funding. Although few, there are instances that the project researchers believe fall under restitution and guarantees of non-repetition via institutional reforms.

Importantly, there is much more work to be done to untangle centuries of injustice thereby dismantling systems and a culture that perpetuate oppression. There has been exponential growth in local organizations pursuing reparations in various ways that provide good examples for academia. In return, academics can help organizations by providing activists with the knowledge of how the law and social sciences can inform their work. The project is open to those interested in joining efforts and aims to closely facilitate collaboration through online exchanges.

As it progresses the project will use the data it collects to develop a public education series that demonstrates how to turn an idea about reparations into policy. Both schools envision scholarly collaborations on student-led projects and the creation of a curriculum. Ultimately the hope is that the website nurtures a community of activists whose members offer mutual support.

“In order to truly understand what communities need to secure racial justice, predominantly white universities such as Columbia must listen and work collaboratively with Historically Black Colleges and Universities such as Howard,” said Linda Mann, project manager and founder of Justice & Equity Solutions. The project is currently in an embryonic stage and is actively seeking funding to expand its scope.

A New Platform for Students to Reflect, Collaborate and Address Global Challenges