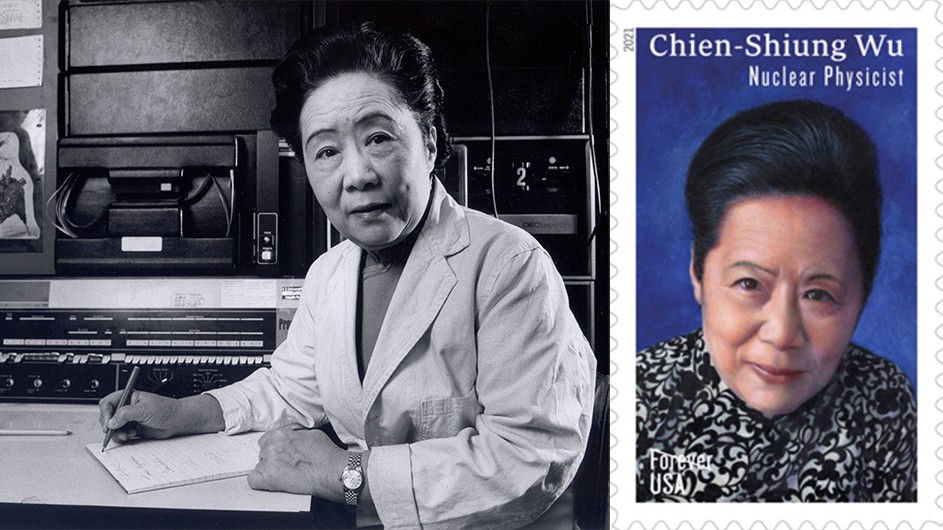 Chien-Shiung Wu led a life of many firsts: the first female president of the American Physical Society, the first woman hired by Columbia Physics Department as a tenured faculty member, and the first living scientist to have an asteroid named in her honor.

Now there is one more distinction to add to her legacy. Wu, who died in 1997 at 84, is the first Chinese American physicist, and third female physicist—the others are Maria Goeppert Mayer and Sally Ride—to be honored by the U.S. Postal Service with a commemorative postage stamp.

“Chien-Shiung Wu was one of the most influential physicists of the 20th century,” said William Gicker Jr., director of stamp services at USPS. “During a career that spanned 40 years in a field dominated by men, she established herself as an authority in the physical sciences and made enormous contributions to the field of nuclear physics, altering modern physical theory forever.”

Wu was selected for the honor by the USPS Citizens’ Stamp Advisory Committee, which typically reviews and appraises about 30,000 subject proposals each year, resulting in the issuance of about 25 commemorative stamps.

Aalto University: New imaging technique to find out what…

A virtual ceremony celebrating her life and achievements will take place Feb. 11, the International Day of Women and Girls in Science.

Born in a small town near Shanghai, Wu attended an all-girls school founded by her father, an engineer, who encouraged her love of science and math. She went on to study physics at a university in Nanjing, and in 1936 moved to the United States to pursue a doctorate at the University of California at Berkeley. She married Luke Chia-Lui Yuan, a fellow physicist, in 1942.

During World War II, Wu joined the Manhattan Project at Columbia, where researchers were working toward the creation of world’s first atomic bomb. She was instrumental in discovering how to enrich uranium to produce large quantities of fuels, and her experiments improved the ability of Geiger counters to detect radiation.

After the war, Wu accepted a position at Columbia, where she would remain until her retirement in 1980. She was named an associate professor in 1952, full professor in 1958, and the first Pupin Professor of Physics in 1973.

At Columbia, she began investigating beta decay, the mysterious transformation of one type of element into another, which is the basis of nuclear reactions. Among her important contributions was the first confirmation of Enrico Fermi’s 1933 theory of beta decay, the process by which radioactive atoms become more stable.

Overlooked for the Nobel Prize

Her most definitive achievement, however, was her 1956 experiment that disproved the “law of parity conservation,” once considered an immutable law of physics. This discovery, lauded as one of the most important developments in the field of atomic and nuclear physics, established that the laws of nature are not always symmetrical.

Brian Greene, professor of physics and mathematics at Columbia, said Wu’s discovery that some events in nature can violate parity conservation, as the mirror symmetry is known, stunned physicists and played a crucial role in the advancement in atomic science.

“After Madame Wu’s experiment, we had to discard completely the idea that the universe is mirror symmetric,” Greene said. “Only a handful of physicists have made contributions that have radically changed our perspective on reality, and she is one of them.”

Wu’s groundbreaking work resulted in the 1957 Nobel Prize for Tsung-Dao Lee and Chen Ning Yang, colleagues whose theories were validated first by what became known as the “Wu experiment,” but the prize committee did not acknowledge Wu’s work.

Many in the scientific community believe Wu was overlooked because of gender, while others say it was less a snub than a rigid adherence to committee rules and procedures. If Wu was disappointed about missing out on the Nobel, she never spoke about it, at least not to her son, Vincent Yuan, a nuclear physicist at Los Alamos National Laboratory in New Mexico.

“What was important to her was her research and her students,” said Yuan, who graduated from Columbia College in 1967. “Not calling attention to herself was also part of her nature,” he added. “Humility is very much part of Chinese culture, and my mother preferred to downplay her own achievements and focus on those of others.”

He said his mother was happy with the recognition she received later in life. By the 1960s and 1970s, the field started to celebrate Wu’s achievements; her numerous awards include the Comstock Prize in Physics, National Medal of Science, Wolf Prize in Physics, and Columbia’s Pupin Medal.

But nowhere was Wu more acclaimed than in China, where she was considered a heroic national treasure. (In Chinese, Chien-Shiung means courageous hero.) In 1990, an asteroid discovered by astronomers at the Zijinshan Astronomical Observatory in Nanjing was named the 2752 Wu Chien-Shiung in her honor.

To celebrate the 100th anniversary of Wu’s birth in 2012, Shanghai officials planned a week of festivities, which included panel discussions, banquets, parades, and a modern Shanghainese opera about her life. A bronze statue of Wu was unveiled in the courtyard of Mingde Middle School in her hometown of Liuhe, where she was educated and on whose grounds she chose to be buried with her husband, who died in 2003.

Wu’s granddaughter Jada Yuan, raised in New Mexico, was only vaguely aware of the extent of her grandmother’s accomplishments growing up. But after she came East to attend college, they spent more time together.

“She was incredibly interesting and curious, always reading, always traveling, always passionately working on something. She didn’t teach me, per se, or talk about women’s rights— although I know she cared about that—but it’s powerful growing up around a powerful woman,” said Yuan, a Washington Post reporter who was 19 when her grandmother died.

Yuan believes her grandmother would be pleased with the stamp and its illustration, which captures her likeness. The portrait features Wu wearing a black-and-white, high-collared traditional Chinese gown known as qipao.

“She wasn’t a person who liked to call attention to herself,” Yuan said. “But I think she would be happy to be remembered in this way.”

University of Chicago announces plans for Convocation this June

Aalto University: New imaging technique to find out what happens in the brains of…

Aalto University: Nokia donates EUR 500 000 to the field of technology at Aalto…

iednewsdesk Jun 22, 2022
Local, emission-free and capable of base load: Geothermal energy is considered an essential component of the…

University of Southern California: Finland’s and Sweden’s pursuit of…