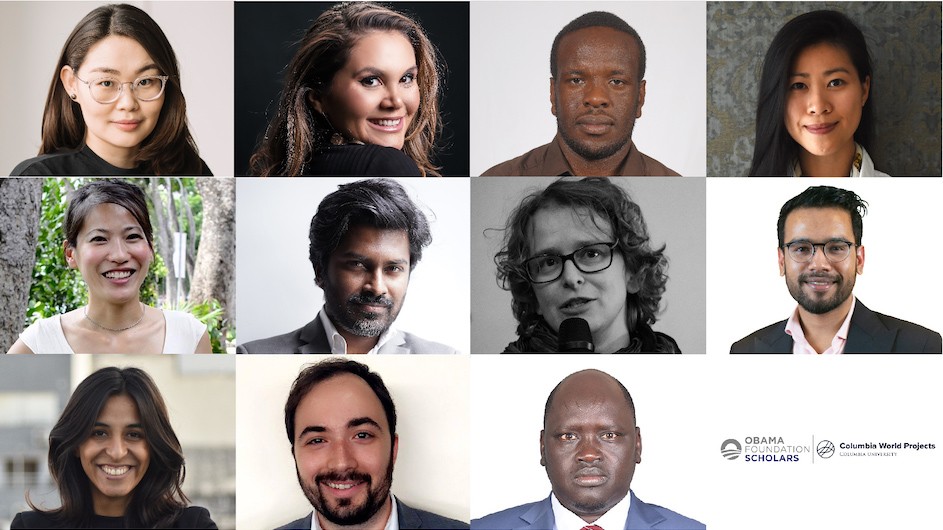 Today, Columbia World Projects announced its third cohort of Obama Foundation Scholars, 11 rising leaders from around the world who will study at Columbia University for the 2020-21 academic year, which will begin virtually. These scholars, as exhibited through their commitment to advancing the public good and solving society’s most pressing global issues, are on a trajectory to accelerate positive change in their community, their region, and the world. The emerging leaders focus on a number of challenges and issue areas, including: training the next generation of journalists in India, increasing civic engagement in Hungary through citizen participation, and increasing access to education for youth in Jordan.

“Witnessing, over the past two years, the powerful impact of this program on the remarkable individuals participating as Obama Scholars, and the communities they are dedicated to changing, has left Columbia even more deeply invested in this special endeavor and all that it can accomplish,” said Columbia President Lee C. Bollinger. “This year we welcome 11 new scholars at a moment that starkly underscores the importance of civic leadership. We are looking forward to supporting them in further developing the skills needed to meet the many urgent challenges proliferating around the globe.”

“This pandemic has changed all of our lives and it has revealed some of the deep-rooted inequities that the 2018 and 2019 scholars have committed their lives to solving. Over the past several months, the scholars have found innovative ways to pivot their work to meet the needs of people in their communities,” said Obama Foundation CEO David Simas. “The world needs more leaders like this, now more than ever, and we look forward to supporting our third cohort of scholars on their leadership journeys.”

Given the COVID-19 pandemic and ongoing safety precautions around international travel, the program will commence virtually for the fall term—orientation is currently underway and online classes will begin after Labor Day. Over the course of the academic year, the new Columbia cohort will participate in a rigorous curriculum, designed by Columbia University in consultation with the Obama Foundation, that integrates academic, skills-based, and experiential learning. The scholars will gain real-world skills, tools and experiences, and develop an action plan that will enable them to scale their work and reinvest in their communities in their home regions.

The scholars will also have the opportunity to contribute to Columbia World Projects, an initiative that mobilizes the university’s researchers and scholars to work with governments, organizations, businesses and communities to create tangible solutions to real-world issues.

The Obama Foundation’s Scholars program, which launched in 2018, is designed to inspire, empower and connect emerging leaders with the tools they need to make their efforts more effective and impactful upon their return home. As part of the foundation’s ongoing efforts to pass the baton to the next generation of global leaders, the scholars program partners with Columbia to combine academic learning with one-of-a-kind experiences led by the foundation.

Here is the 2020-21 cohort of Obama Foundation Scholars at Columbia University:

Increasing access to quality education and preparing youth in underserved communities across Jordan with skills for today’s challenges through content development and experiential learning.

Enhancing South Sudan’s governance by ensuring the public’s right of access to transparent information and by strengthening the country’s rule of law.

Nurturing, inspiring, and training the next generation to become courageous and professional journalists who are committed to justice, truth, pluralism, and liberal democracy in India.

Advocating for responsible and conflict-sensitive investment in developing countries by convening evidence-based dialogues between stakeholders and empowering local communities to participate in decision-making processes.

Advocate for the protection of civilians from armed conflict [Kenya]

Empowering the next generation of young leaders in Mongolia by improving their access to quality education and employment.

Innovating participatory urban planning by leveraging local governments’ capacity to promote gender equality and climate action in the making of resilient cities of the future.

Head of the Office for Community Citizen Participation, Municipality of the 8th District of Budapest [Hungary]